Kurtz knocked down another peg; night might be back

first, i wanted to point out another MAJOR nerf, one that they have to tell us about cuz like dominate we will notice if they try to do it without telling us. and i will make sure to point any nerf out i notice. i’m paying attention to all his stats now, and will have pic proof of changes. but his platinum was just reduced by 20%!!! and they made dominate easier to cleanse thru damage. but enough about those shady practices!

night had the first legendary skin, released around aug 2018. within a couple months she became THE META HEALER. it was so frustrating and i know the community had more angry posts about her than ronin and flatline combined! well eventually, jan 2019, they nerfed her heal. and overnight she dropped from the meta, and became as useless galante or bucket. in fact, the nerf was so devastating that night became better for healing without her skin! her ability to heal one person enough to sustain them was more valuable than her weak healing of every hero. it became as subtle and useless as gammonds heal was. and more recently, when they nerfed flatline, we basically lost all our good healing heroes and saw shield heroes rise to the meta. we don’t see ANY healing heroes being released anymore, the only hero that does any support from all the heroes released this year was briar, and it’s sad to have lost her as a healer since it’s so minimal you can’t even notice it. seems if the hero isn’t good for bounty then it doesn’t get designed, which is going to be more hurtful to the game over time than if they actually left kurtz alone and let everyone have a hero that powerful. so pretty soon when everyone has kurtz they will need to figure out a new way to let whales dominate pvp without any actual skill. but if they don’t add better support heroes we can expect pvp to continue to become less and less fun.

but the bottom line is, the nightengale buff this november update might be the most exciting patch. moss’ healing cloud buff is a close second. these MIGHT be a big deal, or maybe they won’t be a strong enough buff to make them useful again, or in moss’ case, at all. we need more support heroes for variability; desperately! and pay attention to the kurtz nerfs. cuz i just love watching them pretend every update the nerfs were spontaneous. i bet they have a schedule to reduce kurtz to worthless, and the more we make noise the slower they have to take it. and then maybe you’ll get to experience some of the dominating force he has to offer before it’s completely chipped away. would be so fun to watch what a clusterf@&$ it would be for him to be radically unlocked at even his current power.

20% nerf to kurtz platinum skill this update! and another nerf to dominate, it’s already been nerfed 16% and subsequent 20%, and now cleansing the effect was made easier this patch… so by the time your hard work pays off and you unlock him, you won’t get the same kurtz you’ve been losing to since beginning of may!!!

Very interesting points you make. I find Kurtz a constant frustration in PVP as he is (almost) unbeatable. His dominate disables me for so long and by the time it has passed - which is a lifetime in pvp terms - he basically activates it again and then the game is over. It makes me want to scream and throw my phone against a wall because the fight is unwinnable. At the same time I am wasting days of effort in Alliance Wars trying to get a tiny amount of frags to one day unlock him, and as you’ve pointed out, by the time I unlock him about two years from now he will have been nerfed so much it will make all my efforts seem like such a waste of time. But in the end I would prefer that he get nerfed to make pvp a more level playing field. Sorry, bro.

I find Kurtz to be quite beatable, before and after nerf. He’s hard though and that was the intent of the developers. He still is hard. I think they should have designed his character with track shoes though. Anyway, I would prefer characters not be released that would even need major power adjustments. Clearly developers are humans and can’t be expected to be perfect, but we’ve been at this a while now and pretty well instantly recognize skills and abilities that are unbalanced. If the players see it, I would expect the developers to see it too. Slow down, I don’t think we all need a slew of new heroes smashed out every month. Present them to us when they’re fully cooked so to speak.

He is OP and should be nerfed. He will still be stronger than most heroes. Balanced pvp is more important than your need to feel out OP kurtz.

Kurtz is not op in pvp, He’s only like a time bomb. His common weakness is a hero that can assassinate him real quick since he is squishy as jelly. 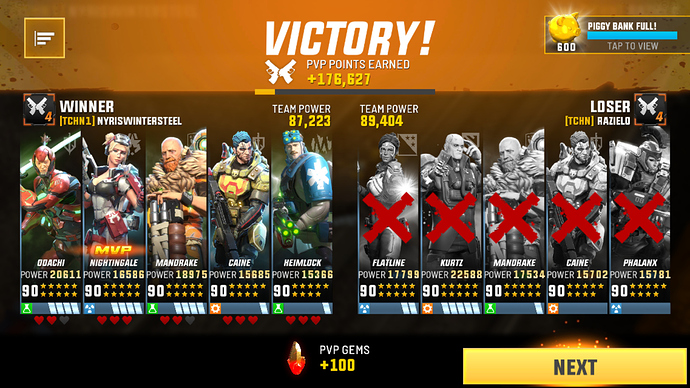 As long as you have to do all that he is OP. First one after that panzer period.

This just sounds like a whole lotta hyperbole to me.

Calm down the world isnt ending.