Why are obviously ridiculous metas allowed to persist as long as they do? Mauler/Halo combo teams is all I see. It’s basically a 4v5 as Mauler can keep a hero stunlocked for ages, but worst of all it’s not remotely fun or a skill test. What is the point?

I feel the same way. Panzer you could at least move and actually play against, even if she burst you down right away. Mauler though? I love having my main DPS stun locked for 10 seconds or more until they die, then the rest of my team is slowly whittled away.

I would love if some of the less viable DPS actually became better. Instead all the last patch did was replace the Ifrit/Night/Panzer meta with Mauler/Halo/Ifrit.

I agree that the Mauler teams are stupid ridiculous. However, there’s nothing that can be done about metae. People will almost always take the easy road. Because of this you get little to no diversity in team make up. players here have said as much. Hard to fault anyone for being unoriginal when doing anything different is likely to cause you almost certain defeat because of the metas or because of th insane bugs ATM. So, players pick what works so they can reduce their frustration. Metas will always exist, they just change form.

Tbh mauler teams are pretty squishy, I can play one of my other teams and take it down pretty quickly.

It’s all about killing order

There is always a counter team for meta team’s.
And meta team’s are changing now

It was Dogface meta before panzy

then panzy came totally overpowered; people make a good support team around her and there was very few ways to face her

then Ifrit came, you could see panzy/flatline/Ifrit team combination 8/10 matches.

and current meta is Mauler/Halo team’s.

Developer’s did a good job with Min, Anvil and Kobold, they are not overpowered. PvP matchmaking system it’s not the best yet but it’s way better than before. 1 month ago I couldn’t imagine a proper team without Nightingale, but now I easily ignore her. because game is more balanced, and there is different meta teams and different teams to counter them.

Let me tell you, I am a huge fan of Mauler/Halo combination. I do believe Mauler team can beat a lot of team’s, But I agree with

Last night I won like 30 matches with my Mauler/Halo team, then I said c’mon, let’s try something else for fun 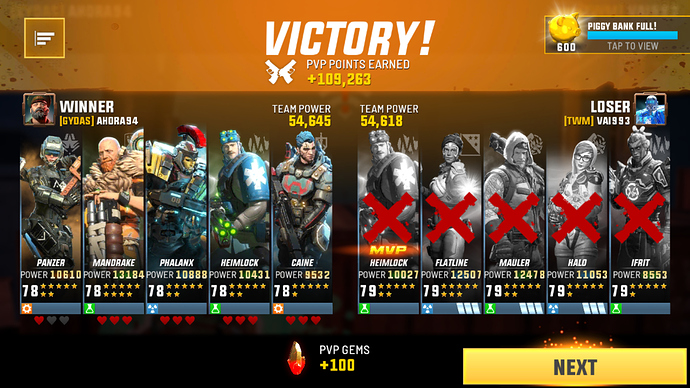 example 2: this right here, opponent team its exact team that I use as Mauler/Halo combination. and I handled it without Ifrit and flatline. 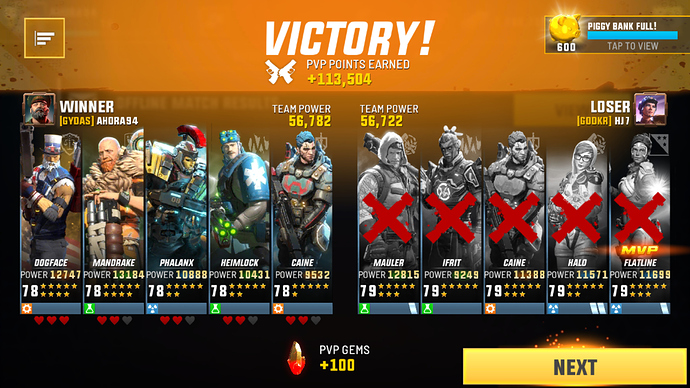 AND I think Most important thing is user experience on PvP, I faced a lot of panzy teams they couldnt beat my Mauler/Halo team, then I used a panzy or dog team and beat Mauler/Halo teams most of the times.

A lot of people forget that skill is also important, I can play the exact same team as my opponent and win 5-0 5x in a row, but lose to a better player the same time

You were unlock though haha

The frustrating thing about the Mauler meta is that it’s extremely RNG driven. It’s basically just a race on which Mauler can hit a crit first and then that team will win nine times out of ten. I’ve played games that aren’t even a close match because I hit a crit in the first couple bullets; but I’ve also had matches where I don’t stand even a sliver of chance to win because crits simply aren’t landing while the other player’s are.

Just build a Honorbound Ronin team. Each team has a counter and its essentially a game of rock paper scissors.

It’s not unbeatable, skill is important to 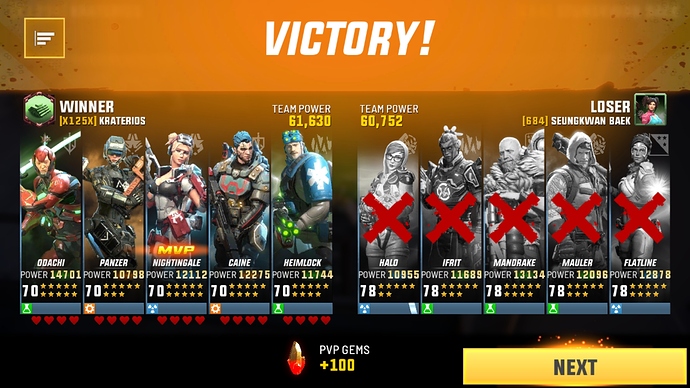 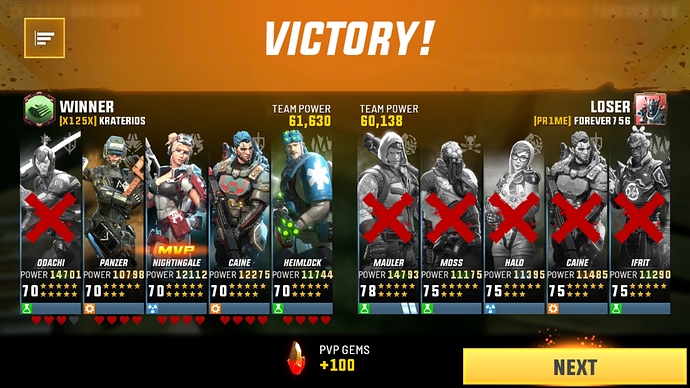 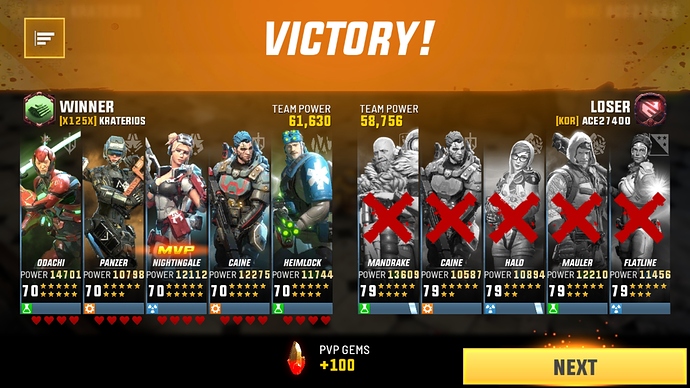 I see Mauler getting nerfed all because people can win against good team comps. Everytime someone finds a comp that works for them and the community hops on the wagon, we have people who aren’t as skilled as others who whine about metas and nerfs and all other type of bs. It’s a game find a team that works for you to beat those teams. As others said, skill and knowing who to knock out first is a key factor in win succession. PvP only gets better for those who have the strategic attitude and gets a good butt whooping and changes with every loss. There are heroes that will blow mauler out the water. For example, my 8* Sappy will kill mauler in 2 clips before he even gets a stun going. Just stop whining and complaining to the forums about your inability to enhance your strategic prowess.

That’s correct in most cases, but with many Mauler teams, it’s insta team stun. If your entire team starts out stunned it’s impossible to counter. At this time there is no skill that negates or reduces the effectiveness of stun. Metas are the nature of every game. If Mauler doesn’t insta stun the entire team at launch, then it’s totally beatable. So, something needs to be done to prevent the insta stun.

That’s why I break his cover

You can’t nerf Mauler without nerfing Panzer or DogFace. Which if you did, Ronin teams would wreck everything. There are counter teams to Mauler, you just risk getting wrecked by Panzer or Dog if you use them… Thats the point. No more bs Panzer runs.

The problem isn’t being able to beat Mauler teams. I beat them fairly regularly as well. The problem is that 80% of matches consist of them. The game just shifts from one meta to the next.

I agree that the Mauler teams are stupid ridiculous. However, there’s nothing that can be done about metae. People will almost always take the easy road. Because of this you get little to no diversity in team make up. players here have said as much. Hard to fault anyone for being unoriginal when doing anything different is likely to cause you almost certain defeat because of the metas or because of th insane bugs ATM. So, players pick what works so they can reduce their frustration. Metas will always exist, they just change form.

Of course that is true, but there could be at least an attempt at more options. Right now the only viable DPS are Mauler, Halo, Panzer, and Dogface. Obviously that’s better than it was a few months ago, but considering we have 65 heroes that’s absolutely pathetic. It’s even worse that most teams just use Mauler and Halo now.

HH doesn’t really help matters with how easy they make it to get certain heroes. We might actually see more Ronin teams if there was any way to farm his frags outside of heronium.

There’s Clyde, Ghoul, Maven, Ronin, Sapphyr, Hardscope, Odachi, and Kunoichi. A lot of options aren’t explored because people tend to choose the “meta”. I believe (not %100 sure) Mauler teams were always a thing, but it only started receiving hate after it became mainstream. Eventually another preexisting team will be found and the “meta” will shift.

Clyde, Maven, Kunoichi, and Sapphyr die way to easily to really be competitive. I’m talking a single clip from Dog to the head will kill, or almost kill all of them.

Hardscope, Odachi, and Ghoul fair a little better, but don’t pack enough punch or their specials are easy to dodge while still being relatively squishy. Ronin is the only viable one, from my experience, because his DPS can be so high.

my experience against dogface is, beck can kill him quick enough
while against mauler is my RNG against enemy RNG, if enemy bring ifrit and halo then im dead (still figuring the killing-order)

@Kraterios I noticed you are fully in the dark side now, lol. Team level 80, pvp team not promoted and playing at level 70 with min-max setup.