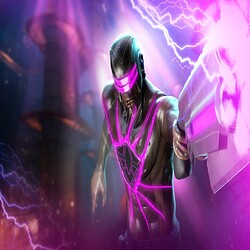 There were a few obstacles that were preventing Keir from using his power in an optimal way. Because of that, his Silver ability: Maelstrom Guard, has undergone some changes.

Here’s what has changed:

Instead of channeling, Keir now casts an unstable force to protect an allied Hero, redirecting all damage towards him for a few seconds and giving the ally a protection buff.
While this buff is active, all damage Keir receives is reduced by some percentage and can activate the following effects depending on the damage received (based on maxed hero):

Previously, in order to move in certain situations, Keir would have to stop channeling his ability prematurely. With these changes, he can now move freely while protecting his allies completely. Additionally, he now targets the ally with the lowest HP automatically.

Stay tuned for a fun event with Keir later this month!