Welcome to June! This month’s featured factions are the Rangers and KLG Black Ops! It’s a battle of shadow stalkers and marksmen, with the beast sharpshooters facing off in bonused events!

June’s event calendar is jam-packed! Check out the event details down below. 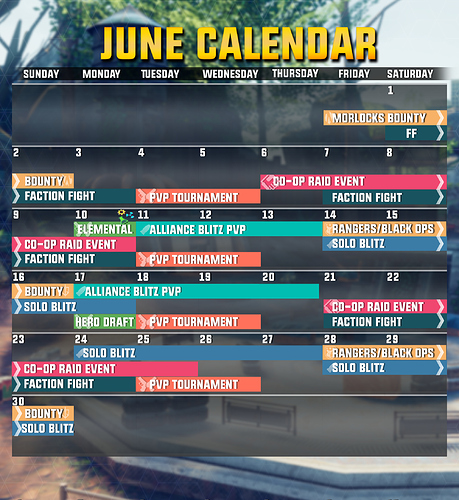 By far my fav calendar-- I’ve missed it!

Sweet, my 10* 5 bar plat odrachi will go from lethal to assision next month in bountys

Thanks for putting back the old calendar, really appreciate it!

I’ll echo the happiness at having the old (best) calendar back!

My 10* 4 bars Pris ready to fight too. I think guys with maxed Kunoichi also glad to see this faction.

Cool, it’ll be the Assassins and the Treehuggers, awesome! My odachi and his apprentice are ready!

Are you new to hero skin?

developers pls add solo raid events in the calender so we will prepare for the mastery portrait and those huge amount of fragments rewards.

Beck and Phoenix in PVP store replacing Moss and Bolt.

For me it’s Phoenix and Castellan in the PVP store.

Also, I think Mauler was nerfed. He now shoots in bursts of 3 instead of consecutively.

Mauler was always shoot with bursts of 3…Nothing changed

He never shoot on full auto

Why don’t put Galante frags on some hard levels?
We need it