Looks like a new Hero is joining the hunt soon 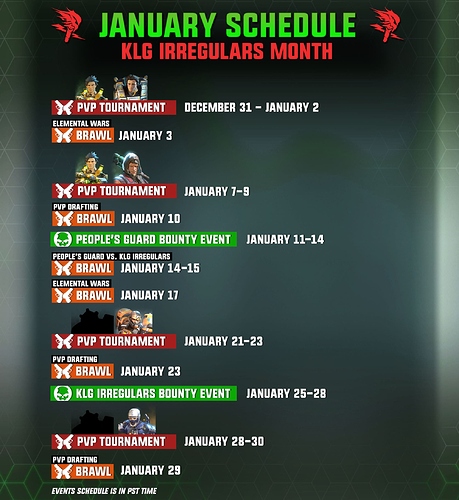 KLG Irregulars! Grateful it isn’t Shoremen as it might have had a high chance of being the bounty nightmare that Patriots was

They did not release the linked thread yet. Will propably happen in a free days

Why was this bounty a nightmare for you?

@BombBella - Since nobody’s mentioned the calendar format yet; this is definitely an improvement from December! The layout being driven primarily by time makes SO much more sense than the last way and it’s much easier to digest.

However; it’s still a step backward from the standard calendar layout. The calendar format is a universal, easily-recognized staple that is, for virtually everyone on earth, able to present information in an incredibly easy-to-digest way. When I see this new format, I’m frustrated that I have no reference for when the weekends are or which events overlap and by how much.

There’s a reason that the calendar has existed for so long and that it’s used so ubiquitously in everyday life. There’s no need to try and reinvent the wheel. This new format looks great, sure. But it is an objective fact that it presents the information much less clearly than a normal calendar would.

I thought it was introduced by Julius Caesar, around 46 BC, with the only reform by the Georgian calendar, to introduce leap years

I mean this is still currently a Patriots situation with KLG irregulars having 2 DPS and judging by Ronin, it seems like Cinder’s plat and Hideo’s gold won’t scale with the bonus multiplier. The tanks are absolute jokes, among the worst in the game, with completely irrelevant passives.

So while part of me hopes the new hero is a support (because the 1dps-4support pvp meta means we need more supports a lot more than another Kaishi-type DPS), part of me wants it to be a great bounty DPS just so we’re not stuck with a 2dps bounty.

That shadow looks like juggernaut from marvel, is he gonna be a tank hero? Because I always thought big body hero is a tank hero

and judging by Ronin

Ugh yes thank you for bringing this up. I can’t believe I haven’t seen people talking about this. The devs made the decision to exclude one specific hero’s ability from the mechanics of the game. It wasn’t a natural result of how the game functions - it was a targeted exception. These things should be communicated ahead of time… Granted, I think it was probably in the best interest of balance to do so, but if you’re going to circumvent game mechanics with a hard-coded workaround, then the players should know ahead of time.

I agree papa. I don’t think dates so much as days of week.

I got above 30 million with 8* Ronin and Halo, which is not that bad and one-hits most bountys.
Kaiashi and Mauler got above 20 million too.

Peoples guard are a doing good in bounty and the Irregulares will do too. Hideo one-hits the minions with his silver, so you your whole team can go for the bounty. Yanglongs bronze does above 100k unboosted too, just like Cinders and she has a good Dps.
I only hope that they balance the spawn of Bio heroes, since we do not have bonus hero against them.

@WalleWu I don’t think he criticized People’s Guard at all; he was saying it would be another Patriots situation where there was a very real lack of solid DPS options. If the new hero doesn’t have decent DPS, then KLG:I is going to be very underwhelming as well.

But the second part about the Irregulars still stands.

It stands, sure, but not with much strength. Two non-feature DPS options isn’t exactly spoiled for choices.

You have a Mech and a Bio Dps, shouldn´t that be enough?

Or maybe I am getting you wrong…

The Julian calendar has leap years. It has too many of them—100 every 400 years, while the Gregorian has only 97. So an average Julian year is 365.25 days, while a Gregorian year averages 365.2425 days—much closer to the solar year which is approximately 365.2422 days. Being fast by three days every four centuries may not sound like much, but civilization goes on for centuries so it adds up.

Russia clung to the Julian calendar into the 20th century, and then the Soviets made a calendar which is even closer to solar than the Gregorian; it won’t need correction for like 35,000 years iirc.

[Brought to you by the Esoterror Foundation.]

Awsome reply, I didn’t look it up, just what I remembered from watching TV haha

But timezones and time is a pain in the …

For work and study I mostly use to the Unix timestamp