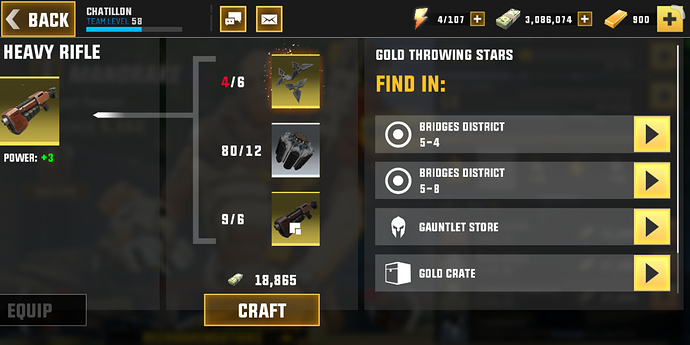 Eh, at least it isn’t 20 throwing stars and knives for one item anymore.

Platting is easier then before, but yeah sometimes you use 20 quick wins for 2 gold stars, and sometimes you’re more lucky

Yes, I agree. Platting is so much easier than it was. I really appreciate how they changed that

Yes the drop rate is much lower than before, but ranking heroes up takes MUCH less work than before. Take advantage of the BM/alliance/gauntlet stores and you should be flying through ranks. If you’re using stamina for all your gear pieces, you’re doing it wrong.

So, what’s your suggestion for me?
seriously, i spend a hundred stamina for obtain an items what i need to upgrade.

A good suggestion is to find a hard mode mission that gives the item you are looking for (Most items can be found in the same number mission as the normal campain, meaning if the item drops in 9-1 it most likely drops in 9-1 hard as well.)

Those 3 missions usually have high drop rates. Most of the time I get at least 1 item in 3 tries. Another suggestion that I’ve been trying out, It seems that items that can be found in multiple different missions tend to have higher drop rates on the later missions. I’ll use Gold heavy helmet frags as an example. Frags can be found in 7-2 and 8-6. There is a 1 stamina difference between those missions but it “feels” like I have better rates when doing the more expensive missions. Would make sense as the more expensive a mission is, the better the reward.

Oke pal, i’ll try your suggestion.
Thanks for reply this thread.

As people have stated above, drop rates are lower then previous months but that was due to a massive reduction in items needed to craft. Even though you may feel like you are hardly getting anything with large stamina drops, Getting 1 plat or gold item would be the same as getting 3 before the changes.

6 gold stars in 103 stamina would be the same as getting around 17-18 beforehand, which wouldn’t have been possible even if you got 1 star for ever run.