Issues regarding VIP and its benefits

So I become VIP level 5 few days ago by doing one of the special pfferes offered nowadays and I have two issues here:

Thanks, waiting for explain 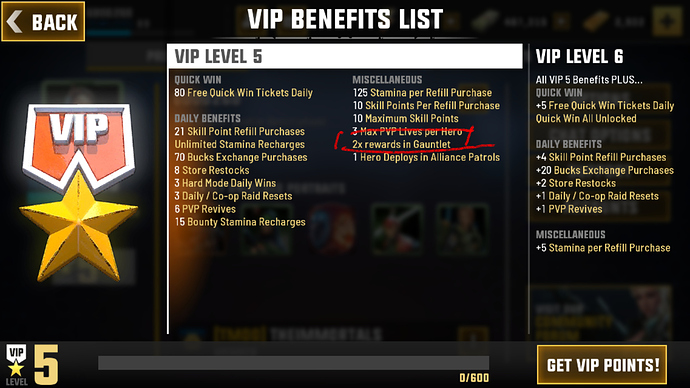 Yea I have the same message for vip 7 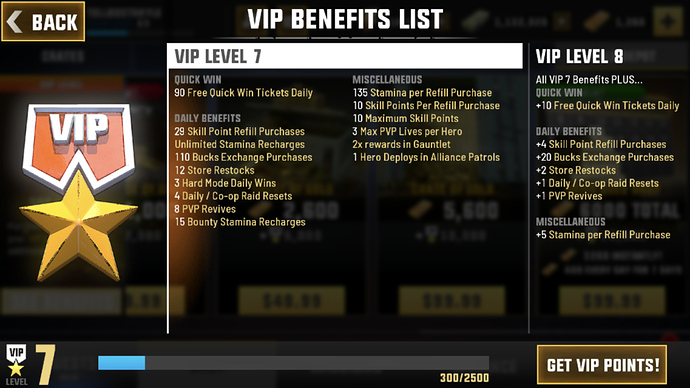 I noticed the number of “free quick win by watching video” decreased long ago when I became VIP as well. Seemingly you get more QW tickets at the expense of less sponsored free QW’s. I get that they want to expose paying users to less ads, but it actually becomes a drawback if you don’t mind watching ads to save some stamina, opposed to using regular QW tickets.

Everything is optional, and by paying you get certain options or features in-game reduced of changed for the worse. Regardless of why that is, I find questionable. I partly use my free video QW’s on sector 13 hard, where each win/playthrough normally sets you back 20 stamina. Having the free QW’s reduced, if only by 5, still means a 100 worth of stamina lost every day, which isn’t totally insignificant, imo.

If you were deceived into thinking you’d receive double Gauntlet rewards at VIP 5, I can certainly understand your frustration. The info is most likely faulty, since it’s been from VIP 10 and onward for as long as I can remember. As long as they delivered the gold (and VIP points) you purchased, the likelihood of a refund is probably slim, I’m afraid. Let’s hope they’ll get the info corrected at least, to avoid any further confusion.

It’s definitely for VIP10 and higher. if you guys wouldn’t mind sending in support tickets regarding this, that will give us access to your account so we can investigate further.

Sure thing, trust u to correct this
But what about QW ads thing???

That has nothing to do with VIP. Newer players get more Quick Win videos per day to encourage them to get invested in the game.