I think you may be right, after all. From the quick look I got at last night’s skirmish before the feed went down, it looks like we’re not dealing with a kill squad. One person is behind these attacks.

It doesn’t make sense, though! There’s no rhyme or reason to the attacks. Our mystery friend is attacking fuel depots, armories, and supply caches belonging to each Faction. It’s like they’re trying to make an enemy out of the entire city.

Gammond doesn’t know I’m feeding you intel. You owe me big time. The next time I run a Danger Simulator, you’d better be there!

It’ll take some time to get those readings you asked for. I need to be careful and cover my tracks, so it’ll be about a week before you hear from me again.

so this strategic attacker is gonna be in the Danger Sim? hmm.

One person who attacks strategically, but can still handle an entire kill squad. It’s the KLG commander with a troop of heavy gunners. Or it’s Grand Admiral Thrawn and we’re all gonna die.

I read you Min, this is Jado reporting in. After debriefing with Sapphyr, she reported similar findings on her assignment. Surge had discovered some promising results regarding who are mysterious friend might be, but the Patriots armory was ambushed. While he doesn’t remember who was responsible for this attack, he assumes it was our mysterious friend. He’s computer was damaged in this assault, and most of his tests he was running were lost. The only information that was left, was a strand of code.

It will take some time for him to recover the lost information, but he is working vigilantly on it. As of now, Sapphyr will continue to follow our mystery friend until she can figure out a way to stop it’s menacing ways. The streets aren’t as safe as they used to be. Bodies of KLG Loyalists are found all around the city. You have to watch your six at all times now. The shadows are one of the only “safe” places. 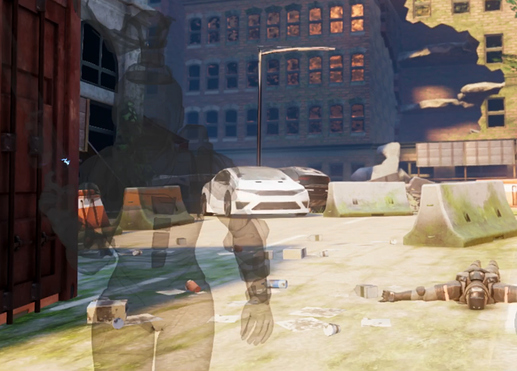 Vinter here. We have been picking up a particularly heavy signal coming from District 8; notable aftershocks and reverberations have shaken our compound for the past 2 hours.

We picked up an intercepted comm from the operative Alvarez at 1315 hours, right at the time of a notable shockwave:

”Right, I’ve set up a monitorin’ system to make sure there is no weird dealins going on, our assets ain’t gonna be taken advant-A̶̻̖̋̈́͝͝Ä̴͉̭̖̩̖̾̓̿̀A̷̦̞͗̒̎͂Ǘ̷̹̤̼͍͐̀À̸̢̖̔̓͑Ä̶̹́̈́̕U̵̜̜̦͂̊Ǵ̶̱́̕͠H”

Alvarez is suspect in the explosion, as we have not located him or his signal, however, we fear the blast injured or killed him. We do not have any other information at this time regarding this. Until new info arrives, my squad will be acting upon a Code Orange.

Good find Jado,
We have raided an enemy base and that they left something behind. Wasn’t very clean on their part though. Looks like a blueprint of some kind and that they are not working alone. Some kind of portal that is big and something that causes mass destruction. The bottom left has a code of some sort,but its smudged.
All I can make out is B7594kStdj…

We copy you @J_A_D_O. We’ve endured severe communication blackouts due to aftershocks. Our contact with the outside is failing.

We do not possess that info at that time. No Rangers have been located, and any attempts to have been hampered by aftershocks. We’ve lost all contact with Madigan and Blackwell, so I fear the worst.

Come in. Come in.

This is neo. Is there anyone to contact? Over.

Come in. Come in.

This is neo. Is there anyone to contact? Over.

Come in. Come in.
This is neo. I am in a situation of seeing i think a man with a very destructive weapon. . .
He is causing a massive destruction in our area. He already killed many people. I need help. Over.

@Vintermyst, the Patriots were hit with severe communication blackouts as well. With Surge’s research being as vital as it is, we couldn’t let anything disrupt it. We recruited the mercenary once known as the Good ‘ol Boy, to help keep us up an running. So far, so good.

The aftershocks seemed to move through the city as well. Sapphyr’s cloaking system starting going haywire shortly after, and became too unpredictable to use safely. This has slowed her down on her assignment, as she can’t get as close to our target as she could in stealth mode. We’re unsure if the aftershocks have had any effect on our mystery friend, but from what we’ve seen and heard already, it probably didn’t even make dent in its path.

I’ll keep you updated if anything changes.

Pray to godlante, thats all I have to say…

Come in! Come in! This is neo.

Thank goodness i was able to repair the radio.

I saw this man on the loose. It seems i don’t know whats his motif. He killed many people yet he spared me… I cannot see clearly his face but i saw he is wearing a cloak with hood… and has red light on his eye… He just stared at me then walked away.

Do you guys know what happened? Do you know who’s this guy?

Ja o Ja d Are you th r e?
I am sending Prophet over to supply Sapphyr with some new updated cloaking abilities that can last longer from the raid that we had at the enemy base. These technology are way more superior than ours. We need to improvise on our tactics in order to overcome this battle. Ours… just a litle…ou dated.
I will s…nd… ba.k…up
-NinjaBros

An elite Sentry unit was reported being seen earlier today. Possibly he was the figure seen? Some KLG Radio transmissions were sent to us by a mole placed into the Black Ops unit of the KLG. Apparently security now is one of Kurtz’s up most importance of matters to attend too. He has sent out guards and units everywhere. Despite this countermeasure, it doesn’t seem to effect our mystery friends path of destruction. 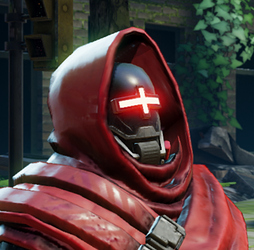 static noise static noise
Yes, Neo I copy you, sounds like a figure that somehow represents a evil version of Silhouette. Sounds as if… he has a evil brother. As… if … the portals… w.e…r openin… for a …e…l dime…on…of…he.o…hunte…rs.
-NinjaBros

Radio: An elite Sentry unit was reported being seen earlier today. Possibly he was the figure seen? Some KLG Radio transmissions were sent to us by a mole placed into the Black Ops unit of the KLG. Apparently security now is one of Kurtz’s up most importance of matters to attend too. He has sent out guards and units everywhere. Despite this countermeasure, it doesn’t seem to effect our mystery friends path of destruction.

I have seen an elite sentry earlier but has now nowhere to be found before this guy appeared. His cloak is like full black. his body is covered with cloak. He is also carrying a bag on his right shoulder which looks like a heavy weapon in it.

He seems no ordinary guy.

This is neo. I cant tell who this guy is. The place is very dark due to massive fire and destruction in our area. But im… su…his body is covered with cloak. Cant te… what appe…ance this guy is…

Come in, come in. This is neo.

There’s someone came. She has a pink hair with a yellow strand on her front hair. I heard she said about Danger Simulator. This girl seems like a dangerous person. I just have snatched one of her radios without being noticed.

I have been trying to use it but it seems like it is broken. i don’t know if I used it correctly…

Maybe she’s with of this cloaked guy i talked about.

I am currently following her. She seems like very suspicious.