Pictures say it all. 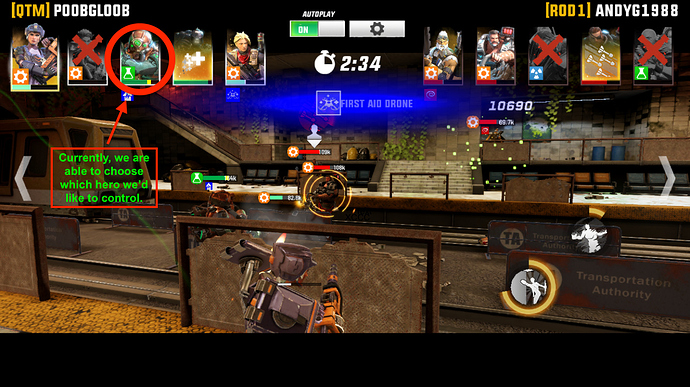 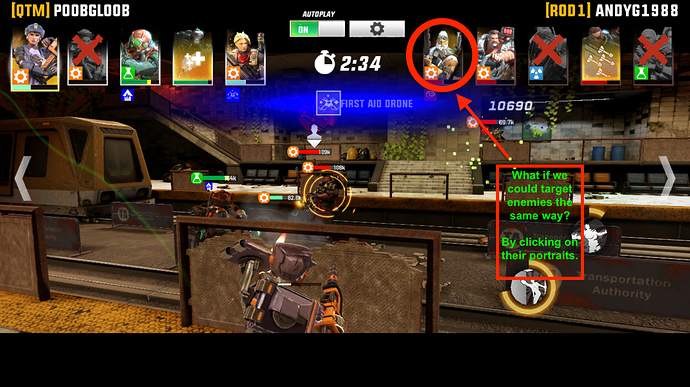 EDIT: To elaborate, its sometimes difficult to distinguish who is who at the beginning of the match (which is the most vital targeting-decision-making time), when there are more than 1 type of element on the map.
Feel like this would help.

This would give to much advantages to auto players. It is not that hard to disinguish woh is who in the begining. Worst is, that you have to decide between three in the begining.

If its not hard to distinguish who is who in controlled play, then how would this give an unfair advantage to players choosing a portrait to attack in auto-play?

Nonetheless, this feature would allow both players equal opportunity to effectuate the same opening action.

But it is still faster to click at the Portrait, than to find the exact position and aim afterwards. May only be a second, but a second can change the outcome.

I’d just be afraid auto-play would become just a simplified version of actually playing pvp. When i think of auto-play, I think of it more as a tool to utilize when you have other stuff going on. I might be busy for a stretch but want to use up my pvp lives so ill throw it in auto and not really care about the outcome a whole lot. Now, if I’m still around, I’m able to select targets I want my hero to focus which gives me a little more control over the outcome.

I guess I’m just a little confused as to how this is different from the current feature where you can tap the hero you want your hero to focus on? It seems like the same thing to me, maybe a little easier to select the target but I wouldn’t want to implement to many things to make Auto-play better then normal play.

It could change the dynamic of the game for more skilled players. It would be easier to micro your team quickly and assign them targets and then get to more accuracy based heroes to do skilled damage.

It would be nice if this was accompanied with a skill unbind that let you control where a skill targeted, not just who it did. So Salvador could pepper the field with his granades instead of just following a character. And Phoenix stream could hit multiple enemies. Ect. Skills did not just cancel if the target dies. This would promote strategy in pvp.