I'm running out of bucks. Tips?

Ive been playing for a 3-5 days and I love the game. But why am I running out of bucks so quickly? When you’re grinding for gear you are suppose to get bucks too right? So farming for bucks is also a deliberate choice to farm?

If bucks is so hard to come by, and I can’t get into nodes with the gears I need to level-up my hero, with difficulty spikes from 5.5k to 6.5k, are we doomed to stay in a node for days/weeks for being FTP? (BTW I’m currently on VIP2)

You have unlocked the gauntlet already? If you have try to complete it , that is so far the best way to obtain bucks , the trade of gold for bucks is usually not worth it unless you are interested in the extra XP and energy

With that, how many teams does it usually take to complete gauntlet? I currently have 7 heroes but it takes 3 to finish each sector depending on the power of my toons.

I would recommend at least 25 because there are 5 sectors, so you get 5 full teams, you could try with 20 but is harder

Early game (and only playing 3 to 5 days, you likely still are) has a bit of a bucks deficit. All your guys need gear, all your guys need skill upgraded, you cant get very far in gauntlet, and levels dont often give you a ton of bucks.

To farm bucks, do as much as you can in gauntlet, then farm the highest levels you can in campaign. You will eventually get more guys to help with gauntlet through natural play (Specifically gaunlet store, pvp store, and hard campaign frag farming), but until then this is often the best early game solution. Later one when you have less skills to upgrade, you will be swimming in bucks from full gauntlet runs!

Thanks man! I jusst realized that gauntlet is the key for moooney.

So with that I really need to increase my chances of finishing 5 sectors. So it’s wise to farm as much character as I can?

Am I doing everything right? WOuld really appreciate inputs on good farmable heroes in the PVP store.

All this is good advice. I will also say that most agree your energy should be spent on finishing dailies first, then as much hard mode as you can accomplish to get frags, then normal mode to progress in story/get gear. You can stray from this to get key guys to silver or gold of course, but its a general rule.

Personally I have spent less time farming frags for Nightingale, Cross, Ryker, and Beck once they are unlocked. Most of my daily energy goes to farming baron and keel right now. Used to go to halloway until they moved him to sector 8… 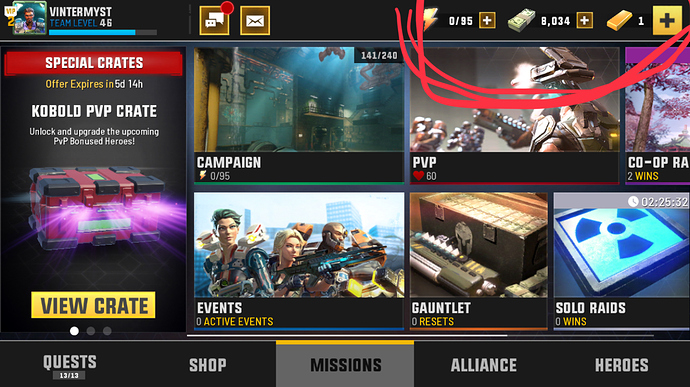 Realistically you are going to be strapped for bucks regardless of how long you have played or your VIP. You will have loads of extra xp after awhile, but always feel like you have no cash. This is common amongst most players.

If you don’t level up all your skills you will be fine. I would pick and choose only the best skills to level until you start getting a surplus of cash.

We’ve been crying for bucks for months and still HHG are not helping us.

The trade bucks for gold is a rip off.

I hope the min event will give us bucks

The trade bucks for gold is a rip off.

Definitely. The amount of sta and cash you get is negligible for 10 gold (the first try). You get a whopping 70k cash and 10 sta, that’s enough to buy one skill point and play one normal mission. The only time it is decent is if you get 3x or more cash.

The only surefire way I know people can get lots of bucks is if the holiday store sells them. During Halloween, the holiday store was selling upwards of 1mil for not a whole lot. It might not be the same for Christmas, but that’s how I got some momentum with boosting my characters skills.