Some Ifrit lore posted by the devs on the HH discord! 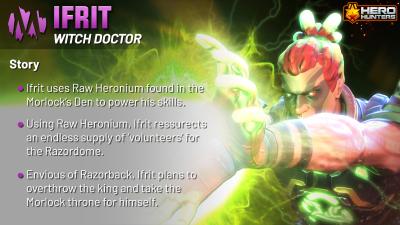 I also wanted to break down this lore a little bit. The lore states that the Morlocks have a king, being Razorback. However, this brings up some… say contradictions. There is much evidence that leads us to believe that the Morlocks are anarchists.
(Anarchy is a state of disorder due to absence or nonrecognition of authority)
For one, in the Morlock’s den it states that they are lawless, and no laws could be a sign of a lack of government. The upcoming Morlock’s event anarchy calls obviously refers to the Morlocks… however, like I said, this leads to contradictions.
Razorback being king would lead us to believe that they are apart of a monarchy, even though the game clearly hints at them being apart of a anarchy. This could mean one of a couple things.
1: The Morlocks are actually a class of people that has been stereotyped as anarchists. The Morlocks are not one unified group, rather a bunch of separate people grouped together by a title given to them by others.
2: The Game and the Morlocks are LIARS. We are being deceived right now. The devs and the Morlocks are working together to decieve us all, thinking that they are not organized, that they have no rules… but that’s just a step in their master plan to take over HH! They ARE THE LIZARD MEN. We must no be deceived by their tricks, me must wear our tinfoil hats and remind each other everyday that the Earth is flat and that Australia is a LIE. #StayWoke

Lol I over analyzed this, hope you find something better to do with your time in the future.

I think “king” is just an euphemism for “the guy that will kill you if you don’t do as he says”.

Thanks for the image, since I barely use discord, sometimes I miss good things like this

Lol I just like overthinking things. But screw that I want correct terminology. I’m too lazy to think of a term myself so I’m going to continue to NITPICK.

I’m more interested in the fact that the Morlock Den has RAW HERONIUM. It may not be refined Heronium but that’s still a supply of Heronium right there where Razorback can use to brush his teeth with. Maybe that’s why Razorback never stops smiling - he may have a stash of Heronium in the Den right under his sh-t eating grin.

Its my favorite drug dude. HMU I use a howitzer to ship them

Got a huge supply lying around dude

I think “king” is just an euphemism for “the guy that will kill you if you don’t do as he says”.

Do you know what the chain-of-command is?? It’s the chain I beat you with so you know who’s in gorram command!!

Ifrits probably just gonna pop a razor taunt though and get sent into another plane of existence (or maybe another sewer grate) and Razorback is going to pull a Luke Skywalker and brush off his shoulder.