Ifrit isnt he too over powered

Ifrit is kinda lousy even at Gold. Dunno about plat, havent’ gotten there yet. But the plat Ifrits I’ve faced have been not much of a threat (so far).

Thanks for telling me what team to construct. I have won every match so far with no deaths!

I think the description of Showtime could need a re-wording. It doesn’t increase everyones damage by 500 per second.

So i played some matches against Irfit/Panzer/Nightingale/Flatline and I must admit that you cant beat this setup. You cant even get Irfit down with his silver skill cofusing your whole team. And if you do, he gets revived by Flatline.

He is as OP as he looked like in the beginning. A 180k+ insta!! heal. Bonus health, bonus damage, confusing and slowing down yout whole team with ONE skill? Bonus health for every dying Hero, and if you get him down, every!!! other hero gets Bonus health in the hight of his WHOLE Hp for the rest of the match? Reiving EVERY hero you kill after 15 seconds?
His four skills have effects that are enough for 7 Skills.

I mean he gets 20k+ Bonus helath from every fallen hero. So how are you supposed to kill him in 15 seconds? There isn´t even a decent energy damage dealer to go after him. You have to rely on mech or chem, so you dont even have an element advantage against him.
You HAVE to go on him first, because otherwise he will revive all the support, preventing him from getting killed.

A week ago we looked at him and laughed, stating how weak he was and how he was just another flatline. Little did we know that he would be immortal.

It’s unbelievable that the devs released Ifrit the way he is. It’s the Get-Rich-Quick cycle all over again:

Go ahead and lock or delete this, but there is something that needs to be brought up. Listen, I get it. HHG is a business and businesses exist to turn profits. But there’s a shameful predatory practice becoming all too prevalent in freemium games that I was desperately hoping wouldn’t become apparent in HH. Devs of games that have regularly iterated updates with added content will at some point realize that they can pump crazy amounts of money out of their players if they release over-powered …

HHG are using short-term cash cows for quick revenue at the expense of long-term game stability. The past couple months have made it painfully clear where their head is at and I’m just about finished with this game because of it.

The fact that his gold passive activates if you “kill” him but gets saved by Flatline, and his plat skill activates even if he is dead makes Flatline/Ifrit an op combo.

If you focus Flatline first, she will be revived even if you manage to kill Ifrit in 15 secs. And she will raise Ifrit back, in case he died.

If you focus Ifrit first, he will buff the other 4 heroes massively and he will get saved by Flatline. And even if you kill him despite all the heals and the disorientation, that means Flatline will get a 20% CD boost to her Clear to revive him again.

The only way to win against this combo is that Flatline miraculously kills someone in your team, but given her low damage thats almost impossible.

My biggest problem with this hero is his platinum activating even if he is dead.

You kill Flatline and kill Ifrit, Flatline revives, and she revives Ifrit. You just spent a whole minute doing nothing.

Even if he doesn´t have flatline with him, he is still nor beatable. Just played against him, Caine, Gale, Heimlock and Panzer. Caine and Gale kept him alie easily since there is no energy damage dealer to kill him quick. Panzer destroyed your covers in an instant and with the 60%!!! slowdown of Irfits silver you are an easy target without covers.

Ifrits plat needs to be looked at, letting him rez people while dead is just stupid.

But part of this still comes back to P A N Z E R - who will end up being pure PVP cancer for probably 2 months after her release until HHG gets their shit together and actually makes her reasonable.

It’s also clear HHG was too soft on healing. Right now when you compare Damage Skills v. Healing Skills its not even close, its a joke, and there are a ton of healers who can double as damage or tanks - letting you run a 4 healer setup while barely sacrificing damage. You typically only want 1 DPS (the one you control) for kills and then 4 dudes who can support you. This was the case before Ifrit, before Panzer, before Flatline, before Caine… if the AI can’t be trusted to shoot accurately at the right targets, why not just put them on support where they can be useful and just bring in a high-star damage hero to do the job?

I killed his panzer, ifrit and Caine 3x

In the end I just wanted to die to make sure I get at least 20 PvP frags.

This is worse then panzer, you can’t play trough this.

Please fix all the other hero’s first before bringing in 1 op hero who breaks PvP for 1 month, to nerf that one and even bring a worse op hero into this game the month after.

This role warfare just benefits ifrit and flatline teams, nothing else but that, just insane… 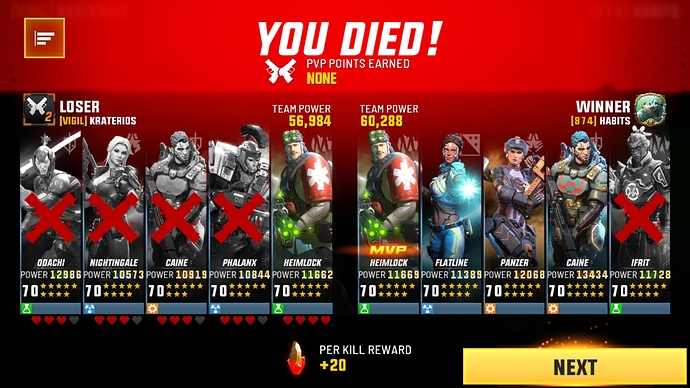 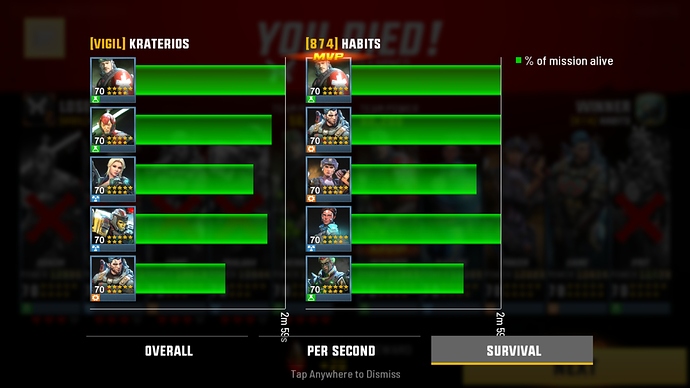 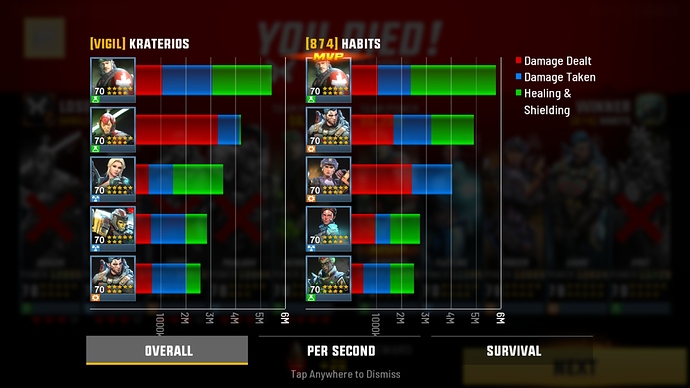 These combos have me laughing me behind off. And I don’t even have these particular characters at Platinum yet. I swear they are either not testing these characters before they are released OR they actually are…and well that turns into an even worse issue. 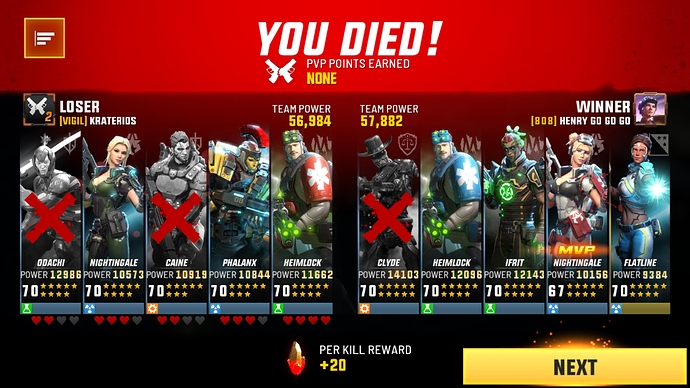 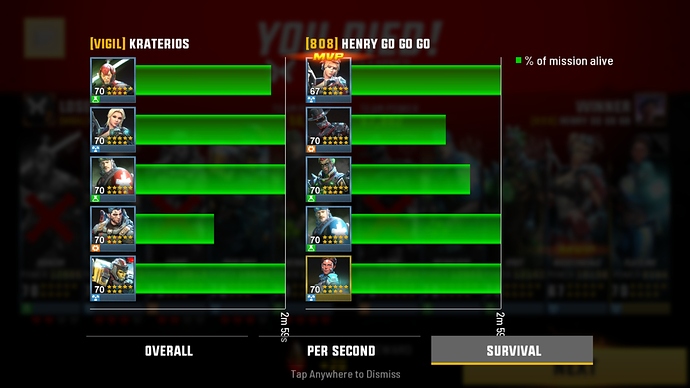 I agree this set up is too OP and i feel bad using the combo… They need to fix it somehow without nerfing them individually,… Ifrit prob would need more of the nerf since his plat seems OP, it works on multiple people at the same time. I believe. So Idk what the fix might be, but it can be frustrating.

Yet you mocked me in another post for running the very style of team you just suggested here. Remember this:

“It does amuse me when people run comps with 4 supports/tanks and 1 DPS then act shocked that their games take forever to finish.

People should be encouraged to run multiple DPS even if it means they might die sometimes because they arent surrounded by 4 supports.”

So now that you’ve spoken out of both sides of your mouth on the issue, would you like to clarify your position or just apologize for the unnecessary snarkiness?

I’m not attacking or shaming anyone, I’ll do the same coming week.

But this is the most game breaking ever, I rather die to a halo plat spam then this, that just means the match is over instead of waiting 3 minutes hoping to get 20 PvP gems

I can think of a number of simple fixes to Ifrit’s platinum skill. they could increas it to 30 seconds, there could be a limit on the revives in a match from it (say 2 or 3?), he could not be able to revive Flatline (or future revive characters), there could be a 45 second cool down so once a hero revives from it no one else will for 45 seconds, etc.

As is the Flatline/Ifrit/Nightingale/Caine, Mandrake or Heimlock combo is just ridiculous. Even if you DO manage to kill a hero through all the damage reduction, invis, and healing, they just get revived right back. And don’t even think about trying to burst down both revivers with so much healing because it ain’t happening.

Flatline and Ifrit must be laughing at Gammond’s gold skill.

Again, 3 minutes fight, just to lose hero after hero without a chance to do anything.

I’ll give this 1 month tops, if the new nerf fix op hero is going to do the same like last few months I’m out. I’ve seen alliance after alliance break down, top players quiting and I don’t want to wast another 200 days to play around this. My irl friends vip 12-14 want to quit, and I’m done telling them to stay because it’s fun?!?

I’ve already stopped playing the same amount I did before. I went back to PC gaming, I’m getting done with this stuff.

Thanks for the update…

Quite frankly Ifrit need several nerds… his healing beam… 100k instantly… operator keel hemlock gammond heal this overtime… only hero comparable is moss but he damages himself… this should either be change to heal over a duration of 4 secs or make him damage himself or even lower the amount of healing due to.the fact it is instaneous

Showtime is cool… leave this skill

His gold ability is cheat… bonus health to flatline… which at platinum means her clear is decreased by 20percent and she now has extra health meaning ifrit comes back…u can’t stop this or more like odds are so low it is annoying. This ability needs a major rework however that’s going to be hard for developers… so an easier alternative will be to readjust amount healed to quarter his health… that should be equivalent to hemlock initial game starter ability which so many players view as amazing