I just can't seem to win at PvP

I don’t have great heros but my total power is 8131 and I’m going up against people with lower power. BUT I JUST CANT SEEM TO WIN. any gameplay tips would be greatly appreciated.

Take out any healers first! Learn their positions so you don’t have to spend precious seconds looking for them after the battle already started. To be honest the best healers are bio chem (green) so invest in a reliable energy (blue) hero to inflict great damage to them.
Blue team also have good healers so you better bring some good mech damage as well.

Please post a pic of your main squad! Team power is not that important if the team composition itself isn’t good.

The key to the winning in pvp is based on how organized your pvp team is. You need to figure out a strategy of combination of damager, healer, and supporter, and their skills. Learn their skills and know how they can make excellent teamwork to stay alive and vanquish your opponents with ease.

And the second key is understanding your opponet’s team. You need to know what that team is capable of and know what action you are going to do to take advantage for your self.

Try collect and experience many characters if they look bad or not, and know what “role”-damager, healer, or supporter they are worthy of. Placing all effective heroes into a pvp team and being aware of what the opponent’s team would do and finding a counter will lead you to many victories. 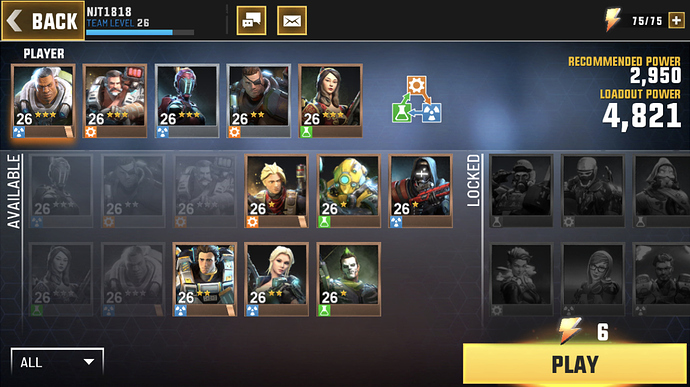 That is my usual lineup

You are likely struggling because your team has zero healing abilities! Healing is crucial both in single-player and PvP. Of the heroes you have, Hardscope and Nightingale are good healing options. Nightingale is great, especially in the early-game because she is able to heal very quickly after a match starts.

Matador, isn’t he OK at that level? But as you say, Nightingale is a hidden gem. I just recently started using her and she’d great!
I think you need to put your dudes up to silver, it makes them a lot of lots more better. I see you’re working on Butter. He’ll be 100% better at Silver.

Matador is solid early on, but he doesn’t get a heal until he’s silver; so that team is heal-less, which is likely what’s causing difficulties with winning at this point. But yes, once he’s leveled, he’s a solid early/mid game hero.

Ok so I’ll try to upgrade my bronze players, keyley Matador, but in the mean time who should I replace with nightengale

I would take out Ryker or Sapphire (unless you control her) and replace with Nightengale. Also Cast is a good tank in pvp so maybe try him out. I find it’s best to control the highest damage player you have because they tend to have low power and can die fast when controlled as AI. 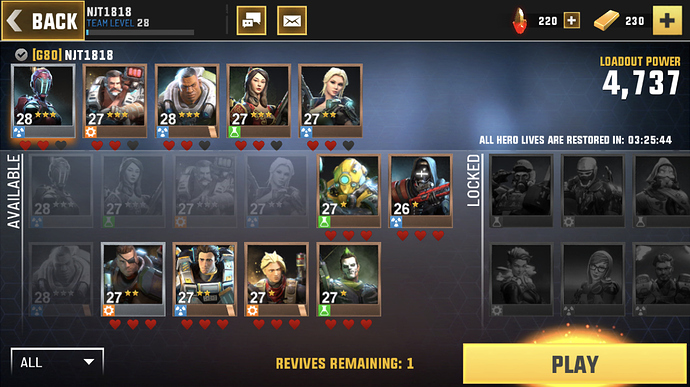 I’m currently saving gold for another hero pack in search of. Good 3 star healer but should I use it to level up my current heroes instead

Make sure to buy the sheriff dude from the PVP store when you have enough gems to do so. People say he’s been nerfed badly but honestly I still use him a lot at my level and he heals up fine.
And also the ginger beard man of course.

Gold is not used for levelling your current heroes up, only bucks! And bucks can’t buy hero crates.

So indeedo you should level your team up.

I looked your profile up in the game and I see most of your heroes are at level 28 with level 10 skills - you need to get these levelled up. Focus on one at a time.

Yes, don’t spread it out to much, make sure you focus on the 5 you have now, and probably on gammond (sheriff dude) and Mandrake (the irshis gingerbead who likes to kill the few last animals left after kurz went crazy)

Else you have a lot of hero’s who aren’t useful and you’re just wasting energy, bucks and recourses

you should stop pumping up. He won’t be much better than he already is - haha! At low - mid and high level gameplay he is still considered one of the worst characters.

I wouldn’t put a single resource into Castellan, Ryker, or even Cross from here on out. They just aren’t very useful at any power level (Cross is probably the best of that bunch but I still don’t really care for him) so you are better off developing other strong PvP options.

As others have said, get Matador to Silver and keep Nightingale’s bronze ability maxed to whatever your current level is. When you win matches and can afford to buy hero frags, prioritize Gammond (still a fine option at lower levels) and Mandrake first and foremost. Take Gammond as far as Silver 3 because he doesn’t scale well at all anymore once you hit Gold/Platinum and Mandrake to Gold ASAP since his team-cloaking is still one of the top-tier PvP skills in the game.

When you run Gauntlet, your first order of business is to unlock Dogface, one of the two only really reliable burst DPS heroes in the game and still a PvP monster. You can honestly keep evolving him until he hits 10* since he’s useful at every level but you will probably want to work on at least unlocking Flatline after you get Dogface since she’s a very useful support toon, able to both heal and ressurect. Maven is third in priority but still worth unlocking eventually since she’s a very useful PvE option.

Looking at your line-up and level I would go for: Hardscope (Useless bazooka), Butter, Nightingale , Cast (moreuseful at gold), Cinder (DPS) = 2 healers, 1 shielder, 2 tanks, well represented for each element. Sapphyr and Sentry are good too. But you have way too much energy toons, which is the game’s fault.

I have 300 gold WHAT SHOULD I DO WITH IT

Save it if you can. I’m not one to speak since I spend all my gold for stamina resets and raid resets but the golden rule is to save the gold for good crates. If you have any VIP level you can open a 10 pack of hero crates which is good for getting an army started.