If you’ve been reading a few of my previous topics, you would know my very apparent obsession with the Elite Kurtz Medic. It’s really been just for a meme though; Operator (plus Vanguard, Sentry, and Rifleman) has a pretty cool overall design. This post is essentially a necro-bump of another rework post I created a few months back except I will only be discussing Operator.

Really though, this one will be about his Bronze and Silver skills since Operator is more of a “utility” Hero. In this case, I wish to increase his healing potential by providing Operator with the ability to overheal targets akin to the Mediguns from TF2. 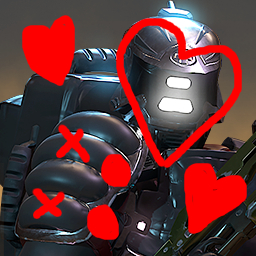 A smile I would like to protect, even if it is behind a helmet.

Bronze Skill Rework: Operator has the strongest single target heal out of all the other dedicated Healer Heroes in the game - far stronger than even Nightingale and Ifrit. My Operator, who is at 5 Stars Gold +0, has a level 54 Restoration that heals around 27k HP a second for 4 seconds. Way back before the Role Warfare balancing, that same Operator with the exact same skill level would heal for 45k per second for 4 seconds! Bear in mind that his healing is not spread over 4 seconds, it’s per second over 4 seconds.

That’s a lot of healing. No debuff cleaning or immunity; just really powerful heals-per-second. Think of the Quick-Fix’s Uber from TF2.

Even with his nerfed healing rate, Operator can save a similar leveled Hero at 10% health and bring that Hero to at least over 50-60% health, all while his Healing target was being a sponge for bullets.

So here lies the problem: when Operator’s heal target has reached full, Operator will still keep healing that target for the rest of the skill’s duration. Granted, the target’s health will instantly be restored upon taking damage, but overall the skill is essentially wasted on a fully healed Hero.

The obvious solution: allow Operator to overheal his healing target when the target gains all of their base health back. He doesn’t have to “jump” his healing beam a la Ifrit; all Operator has to do to is to make his Allies healthy.

If the healing target has recovered all of their base health, this Hero overheals the target equivalent to the amount of healing the target would have received normally. Overheal degrades over time, at 4% overhealed health per second.

Silver Skill Rework: the Flashbang feels out of place for Operator. It deals laughable damage and has a debuff that only works a third of the amount of times it will be used. Granted, the Disorient effect is a great debuff against enemy A.I., however I would rather have the Stun debuff as the main Flashbang effect rather than Disorient. An enemy that can’t shoot back or move is better than an enemy that can shoot back with inaccuracy. However, Operator’s job is not to cause damage or debuffs, which is understandable given the Flashbang’s negligible effects. Instead, let’s give Operator a “leeching grenade” that would work similar to Hivemind’s Leech Drones.

If the Ally were to reach full health from the Leech Grenade, this grenade will instead overheal the target equivalent to the amount of health they would receive normally. Overheal degrades over time, at 4% overhealed health per second.

Gold Skill Rework: actually, this skill is pretty solid where it is. The ability for a Hero to heal themselves is already powerful enough, especially since for Operator has this as a Passive. We can leave this be - maybe buff Recuperate’s healing rate a little?

Platinum Skill Rework: same as the Gold Skill: pretty solid compared to similar Platinum skills. Nothing to change here. However, I do have one little idea…

When this Hero’s health reaches above the 50% threshold, up to a minor, numerical value of any Healing received is instead spread across all Allies.

Put me over a fire.