Before you read this… 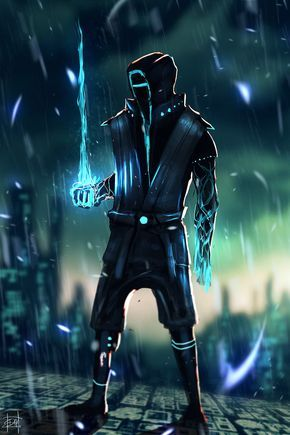 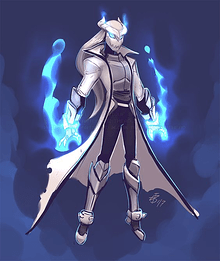 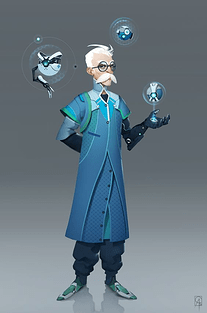 For his lifetime, Glaize was interested in science, especially into cryonics. He spent his lifetime in devoting to science by using cryo-preservation devices to keep soldiers preserved and waited to be revived. Uneffective, but ensures the revived will be at peak physical conditions.

At his thirties, he joined the UAF because he thought that they were fighting for a good cause. He provided the faction with cryonic tech to revive major soldiers for the war. He created his own Orb of Frost, which is a defensive tech to protect himself if the faction falls. For some reason he always left the faction in the winter and came back on spring. Some had seen him in his room a few days to winter with his eyes blue and his hair white.

Glaize built a relationship with Colonel Wesson and he was loyal to him. For a period of time. He found out of Wesson’s plans with the Rogues. Glaize felt that this faction is now a corrupted faction, so he left the UAF and took all of his tech from the faction. He then soon migrated to the Patriots since their goal is not to overthrow but to save their country. He felt this is where he truly belongs and he now pledged his life to the Patriots.

Description: A cryomancer scientist. Deals no initial damage but saves his team from falling dead and can continuously casting skills, dealing damage over time.

Uniqueness: Glaize cannot deal damage through shooting. The only way to deal damage is by skills, which charges pretty fast.

Bronze - Frost Bomb - Charges his Orb of Frost to create a frost bomb and shoot at the designated target, dealing xx (very low) damage. The target and everyone in the radius will be Slowed by 50% and Disoriented for 4 seconds. There is a 10% chance that the enemy would be Stunned for 6 seconds instead of Disorientation.

Silver - Icicles - Glaize generates an sharp icicle and tosses at a target, dealing xx (very low) damage. If he hits a target with a negative effect or the target is previously hit by Icicles, deal an extra 50% damage to the enemy. If a enemy hit by Icicles is eliminated, he throws 2 Icicles at random enemies.

Gold - Cryopreservation - If an ally drops to 1 health, the ally gains xx shield and boosts xx armor until the shield depletes.

Platinum - The Arctic Ghost - When this hero dies for the first time, Glaize is Revived to xx health and a blizzard covers the battlefield, cloaking your allies, preventing from the enemy from seeing you. In the blizzard, your allies are inflicted with 25% more damage if an enemy shoots at them inside the storm. Glaize reduces his charge meters by 50% and Glaize is Immune to all damage inside the storm. This effect lasts for 20 seconds and when the effect ends, Glaize is eliminated.