“Hah! Burn, baby burn! Don’t you love the smell of the crispiness of your enemies?” 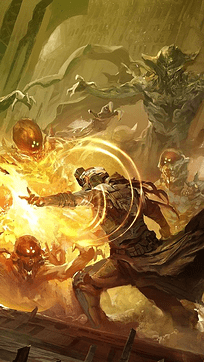 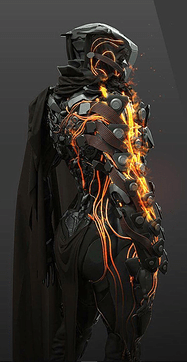 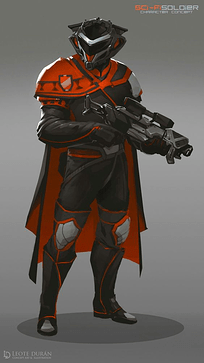 Choices. What do you know about choices? You live a life that has people bring things and achieve things for you, while we, abandoned, young, broke and hungry? We take any chance we got to get a living, even it means taking lives or be a slave to someone else. Are those choices?

I had a life. Not a good life. I survived, but not by being controlled. Not by working with others. I commit thefts. I steal various things to craft various things learned by Dogface himself. I sold them in the black market and soon became the richest person in the market. But, I never liked that life. Always on the run, hiding and sometimes committing some genocides.

But then, I found the Nomads, a faction that accepts all types of people, from maniacs to overthrown leaders. I joined and found where I needed to be. A place where there is freedom to do things without being restricted. I was the faction’s gunsmith.

So now you know my choices, I’m giving you a choice now. Back down…or burn?

Description: A fiery assault. Deals massive damage to himself to wreak havoc to all enemies.

Ammo: 5 per clip (with recoil)

Fire Bomb (Bronze): This hero tosses a sticky grenade at the targeted enemy [Stunning] for 5 seconds. After 5 seconds, [Fire Bomb] detonates, dealing xx Damage to all enemies in a wide range. Also, any enemies that are in the blast range receives xx Damage per second for 10 seconds.

Wildfire (Legendary) - Bronze: This hero tosses a sticky grenade at the targeted enemy [Stunning] for 5 seconds. After 5 seconds, the sticky grenade detonates, dealing xx Damage to all enemies in a wide range. Also, any enemies that are in the blast range receives xx Damage per second for 10 seconds. For 30 seconds, whenever the target moves, they leave a trail of fire behind them, dealing xx damage per 0.5 seconds for the duration in the flames.

Ignition (Platinum): Start the mission with fire on the enemy grounds on random locations for 10 seconds, dealing xx per second. Also, whenever this hero does damage to cover or an enemy, ignite the ground on fire

Yea, if you’re guessing that this is @HecklerP 's work, we do some collaboration together. He does skills, I do backstory. We’ll might work together more often.

+1 because I can recognize Hive Thralls being scorched anywhere.
+1 also for the third image, the proposed skin. I like how it isn’t flashy at all. It’s like stereotypical vampire attire but without the vampire part. I can’t really type out how much I like that outfit.

If you noticed, the emblem at the shoulder at the third image, it looks familiar to something

Me and @Spyro666 here are going to be collaborating a lot more, though this is my permission to Spyro to use my content for once. The rest of the remakes of my concepts will be mine next time.