"Be a gentleman. Be the man all ladies want. Be that guy that always stick to “ladies first”." 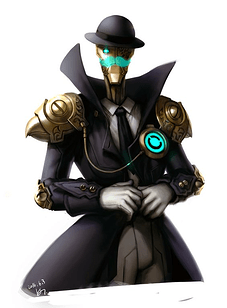 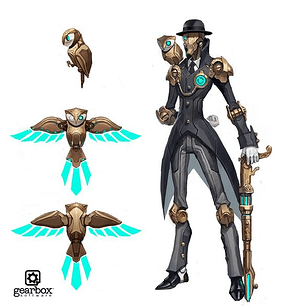 A creation from a mechanic from the future, Aeric was equipped with a single-shot rifle, a clock to jump through time, and a mechanical owl for companionship. He traveled around the world across the timeline. He saw the dinosaurs, the prehistoric people, medieval knights, Knights of the Round Table and the Legend of King Anubis.

He never stopped there. There he jumped to the future, seeing things in the future of humanity. He though never spoke a word about the future. But then, he jumped to the time of Zero Day, a few decades before his era. He was shocked to see a war like this, using advanced tech used for saving people to use for war, people dying in the worst way possible and the brutality of Wesson to destroy anyone with warheads if they went in his path. He saw destruction and he was not letting that happen.

Aeric sought out for a settlement to start turning to tide over, create peace among the fierce leader and found the Watch. He saw them as peaceful, fighting when they only needed to and tried to convince them he was a perfect member of the faction. The Watch members were skeptical, but he proved it when a massive scale KLG infantry tried to launch an assault, Aeric swept through with ease. The Watch saw him as a potential addition to the faction, so he now helped Surge and Yeager, letting them find out about his physical body and how he gained consciousness.

Description: A confusing enemy to deal with. Dealing damage through enemy damage and various buffs.

Owl Drones (Gold) - For every 15 seconds, Aeric spawns an [Owl Drone]. The owl drone has xx health and deals xx damage per second. When the drone’s health is depleted, rush to the weakest enemy and deal xx damage to a small area. The damage increases by xx for every drone hit.

This is not even original, The picture is just Marquis from Battleborn

True
I did get inspiration
Hey, I did not copy everything from battleborn. I only took the concept of the character.

Yosai is technically right. True that you didn’t take everything, at least write some credit in. BTW, I do play Battleborn and as I am aware, Owl Drones are something that exists in the game itself.

But in defence, the skills are your own idea, so yea, you do get some credit Heckler