Hero Spotlight: Kurtz, Leader of the KLG! (Plus: Dev-Astation 5!) 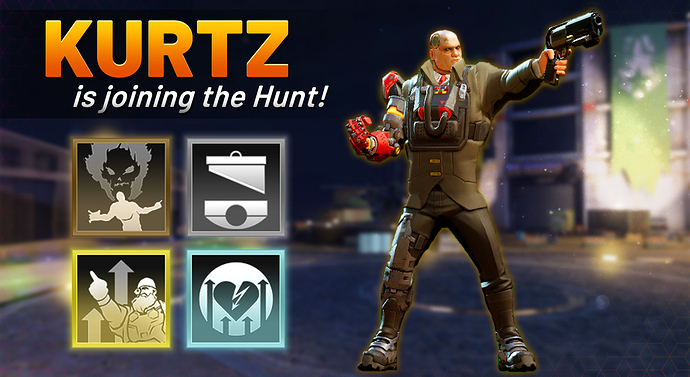 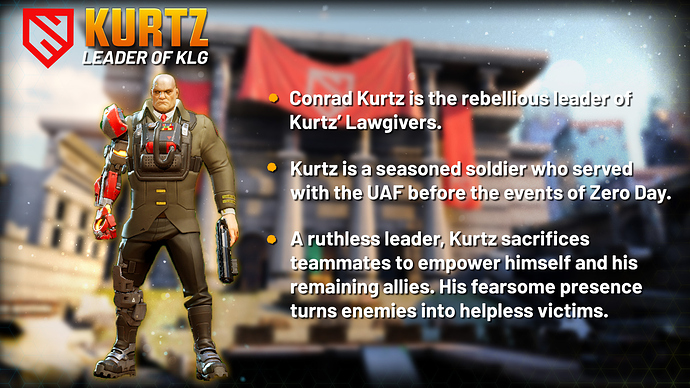 A former UAF commander, Kurtz, the Rebel Leader left due to ideological differences between himself and Colonel Wesson. He created his own private army, the KLG, and seeks to obtain complete control of the city with an iron fist.

Overwhelms the targeted enemy with dread, Stunning them and forcing them to cower in fear. Afflicted enemies have a chance to end the effect early each time they are damaged. Targeted enemy Heroes must be less than or equal to the Ability Level. If not Stunned, they are Disoriented.

Fierce Retaliation - Passive
Whenever an allied Hero is killed, all enemy targets become Heal-Blocked and take Elemental Damage per second for a short time.

Where Can I Get Kurtz!?

Kurtz will be available through Crates, and through Alliance War rewards!

Join us Wednesday, April 24th for your chance to face off against the developers! We’ll be taking Kurtz into PvP Duels to show off the KLG’s brutal commander!

Earn a special portrait for fighting a developer, and get a sneak peak at what Kurtz can do!

Look for details in the official Dev-Astation post coming soon! 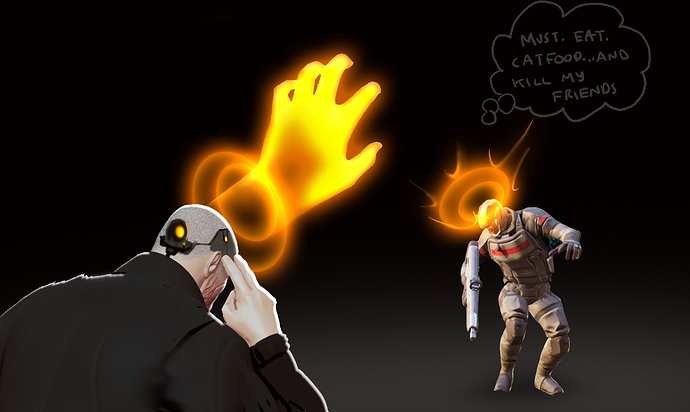 What do you think of Kurtz??

The desing is aesthetic. I don’t see it as a competitive hero tho.

Yes for Devastations! Hope I can be able to participate for a few of those! Also, Kurtz looks mean! I look forward to seeing what the numbers are in his skills.

I’ll tear you up in pvp)

I will be glad to fight with you)

Wow. This should be interesting lol

and how can I know which developer I am facing???

so he had a past with wesson huh? Considering they were together last danger simulator, i kinda expected that.
Conceptually, i like that he and wesson are somewhat opposites: Wesson’s skills support his allies ans he actually benefits as long as his allies stay alive, while Thanos( i mean Kurtz) is willing to sacrifice his allies
P.S. Good to see you, Thanos. I’m looking forward to unlocking you

Alliance war? No fragments on Co-op?

Curious to see how Kurtz’s Execute skill works alongside Flatline’s gold, which prevents an ally from dying. Also interesting to see how fast “Execute” charges, and what happens if he’s the only one still alive (which could be a common scenario if the skill cools down somewhat quickly). Most likely the skill wouldn’t trigger at that point, or he’d have to kill himself.

Cant wait for the thanos/kurtz memes to roll in

Great, another case grabbing 7* Hero that’s only obtainable by <1% of players

Kurtz looks really broken imo. Depending on how fast the dominate stun is, you can one shot an enemy with execute to power up and heal your team. Charge time is also an issue. If it takes too long, he would be bad, since he would never be able to use it.

That’s what the dev-astations would solve, finding a balance and addressing possible problems. He does strike me as a high-risk, high reward character.

I predicted in discord that if Kurtz was a pay to get hero like 7 stars, the game is approaching to p2w route. All of his skills are one mass threat in pvp. (Especially his platinum) I’m hoping kurtz gets rebalanced before he becomes available.

you’re right. already in the campaign his skills are well broken. You basically can not do anything because it has you paralyzed when you use your dominant ability.

I urge you to wait and see before you pass judgment. Nobody has Kurtz yet, so talk of rebalancing a Hero that isn’t even available yet doesn’t solve anything.