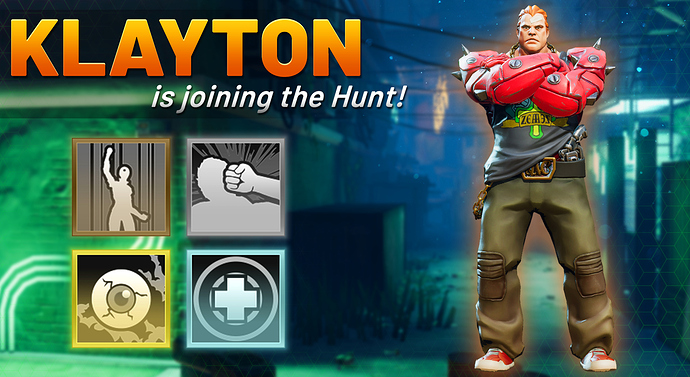 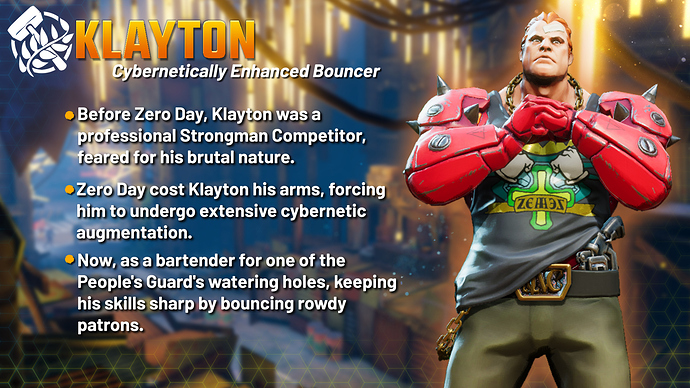 Klayton, the Cybernetically Enhanced Bouncer, is a rough and tough Frontline brawler who takes hits as well as he dishes them out. His Skills focus on counters, Stuns, and self buffs that combine to make him a dangerous contender.

Cruisin’ for a Bruisin’

Taunts the enemy team for 5 seconds and prepares for a counter attack. If an enemy damages this Hero, this Hero goes into a rage, counter-attacking dealing damage to a random enemy with a 20% chance to stun them for 10 seconds.

Charges the targeted enemy, dealing Elemental Damage and stunning the target for 5 seconds.

Whenever this Hero stuns an enemy, he recovers Health and increases his Fire Rate and Reload Speed by 50% for 10 seconds.

Where can I get Klayton?!

Klayton will be available through Co-op Raids and Crates! 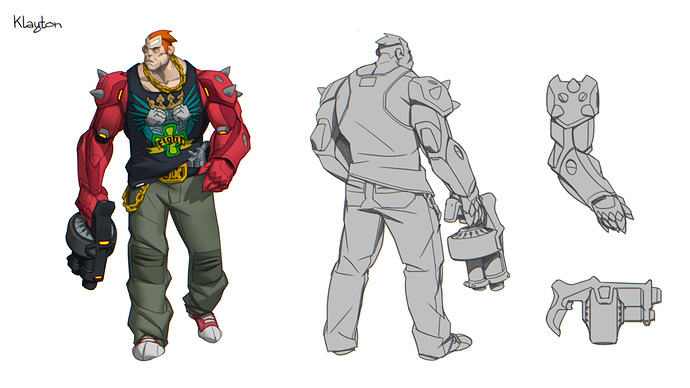 Not sure about him… I was hoping for a bio…He’s definitely a cross of already made heroes. His gold seems like it has major potential tho. Another top 5 power hero??

Just assume 5* until we hear otherwise is my guess.

Don’t give them strange ideas

How many mech heroes do we need?

Never enough apparently. It would be nice to get a strong Bio DPS hero for Xmas, but I guess that’s a little too much to ask for.

-Ok, so let’s add another tank.

He looks very similar to Shank, which isn’t necessarily a good thing. His bronze and gold look promising, but I’m keeping my fingers crossed.

I’m sure they are already planning it, they just need to figure out a way to try and spin it like it’s a benefit to us.

“Having another Mech hero is a benefit to you all. Believes us. Also new 16* heroes are needed for everything in the game now, you need them, get them while they’re hot.”

PLS NOTE: This was sarcasm.

We need him how or why?

I mean, Shank was released couple months ago and I’ve seen him just couple times in PVP, bounty, coop and of course I don’t use him for gauntlet or solo raids. It’s almos the same with Shives (after her nerf), Carabinna, Commando, Alvarez (not now cause he’s buffed) and Xianjiu.

It better not lack of damage like the pies shooter shanks

Yeah, Shank is not that good, and his guy seems REALLY similar.

Or how about “we want new players to feel it’s a bigger reward when they unlock a hero, so we have made new heroes 5* to unlock instead of the old 3”. Never mind the fact most new and old players alike can’t unlock a 5* hero for most of the month they are featured, and have the biggest bonus, without spending hundreds of gold.

So a grenade launcher weapon? And was he the bouncer at Shank and Shivs prison?

It says an LMG he uses