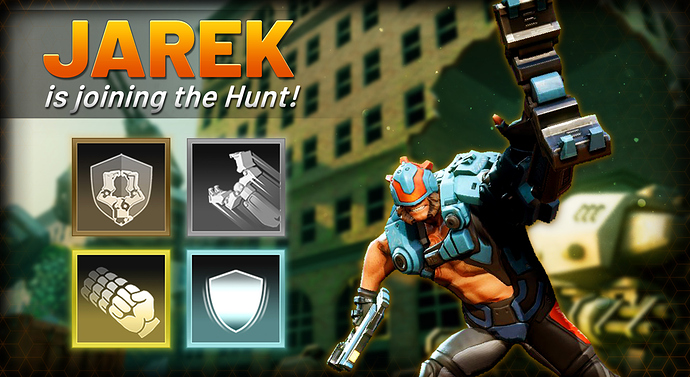 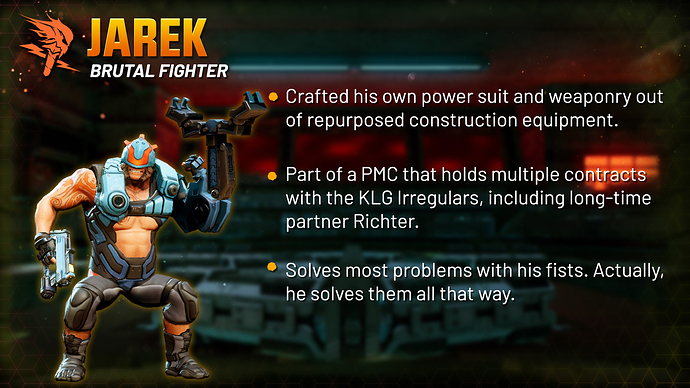 Jarek punches the targeted enemy, dealing Damage with a chance to grapple the enemy and shield himself from damage. If the target is Stunned, they’re guaranteed to be grappled! Enemies affected by Grapple Guard are Lifted, and receive a portion of the damage done to Jarek’s shield while he’s channeling Grapple Guard.

Jarek winds up, launching a powerful slam that deals Damage to a targeted enemy. This skill penetrates shields and ignores enemy armor!

Damaging an enemy with Grapple Guard or Shatter Strike also Stuns them. If the enemy was already Stunned, they take damage and are Lifted instead!

Whenever Jarek uses his Bronze or Silver skill, he reduces Damage and gains Armor for a short time.

Where can I get Jarek!?

Jarek will be available from the PvP Crates & Co-op Raid! 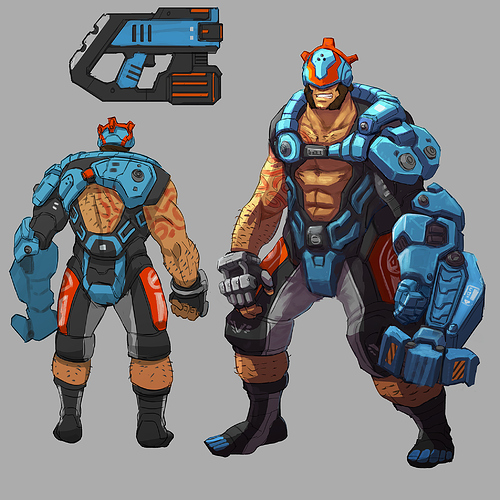 What do you think of Jarek?

Looks disappointing. Like a mix of the other 2 useless KLG Irregular frontlines.

Bypassing shields is pointless for tanks since the tanks never do enough damage to finish off a shielded target anyway, in the worst case the shielded target is near full health, getting a heal over time (i.e. Kobold), and the “shield skip” tank is just tickling their health bar instead of helping the team to actually breaking their shield.

I’m also tired of these gold passives that just give the active skills an effect they should have had from the beginning. How about…

“Whenever an any enemy is affected by a stun while already stunned, that enemy takes [big damage] and is lifted for X seconds.”

That would be a fun and powerful passive that encourages encourages more team synergy.

His plat fits right in with Richter and Yanlong as a major ZZZ passive. Armor is insignificant and damage reduction is useful, albeit boring, and it sounds heavily limited (short duration only after skill use). HHG couldve gone with something more exciting like a big cooldown reduction after a successful lift, instead we just get Richtlong.

Only thing that might save this guy for me is if his silver and gold actually do a TON of damage… but hes front line and HHG has an allergy to frontlines dealing good damage so I’m skeptical.

Someone making a harsh first impression based on text:
I’m gonna do the contrary and say he seems cool! But I’m definitely gonna give a more empirical opinion once I have gotten him, leveled him up and played around with him a few times.

How long is his Lift for?

Apologies, I thought I recall reading his tagline as a “Brutal Frontline Fighter”.

Still maintain the rest of what I said, passives look super boring and unless the gold bonus is just bonkers damage that encourages a combo-style hero - he just oozes mediocrity.

IMO Bolt is one of the only heroes who has been given damage skills that are actually “oh shit” good for direct damage. Considering Jarek has built in stuns and shields, but only had a single pistol for damage, makes me strongly suspect that this dude’s just gonna be a forgettable stunbot.

He seems like he would be an annoying disruption if his skills are timed right, but is probably vulnerable without heavy support. We’ll see.

i thought he would have been like some sort of animal. gorilla brute strength with traps and stuff. but yay for the hit you and shield thyself i guess. Anvil will have fun with him

His skills might be the most annoying ones I have seen so far, lets see how this goes

I think he sounds a bit like a Mauler (and you like Mauler didn’t you?):
potential to stun and / or lift, lifted enemies take extra damage. Both active skills deal damage. Sure the Platinum skill doesn’t sound too hefty but let’s see how the numbers are.

Lift is in my opinion very underestimated. No effect makes the opponent more vulnerable.

Lift is the best kind of stun

When is update coming… Any idea.?

yeah, i saw the offer for him and a few other things for like 1999 gold. he only needs 60 fragments though. guess i’ll wait then