Flatline deals damage to herself and a random allied Hero is revived with a certain health percentage. If no allies are currently dead this skill will heal the allied Hero with the lowest remaining Health instead.

Continuously electrocutes the targeted enemy dealing damage per second, and stunning the target. This skill stops after channeling is over, or until she is interrupted.

Whenever an allied Hero takes lethal damage, transfer 50% of Flatlines remaining health to the allied Hero to prevent them from dying. Then, both Heroes recover a small amount of health over time. This skill can only be active on one allied Hero at a time. If an allied Hero is already recovering, all other allies are susceptible to death.

Whenever an allied Hero is killed reduce the cooldown of Clear by 20%. For each fallen allied Hero, Flatline will receive bonus damage and health.

Where can I get Flatline!? 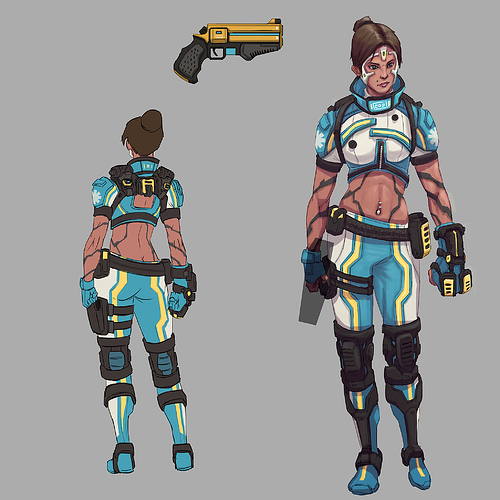 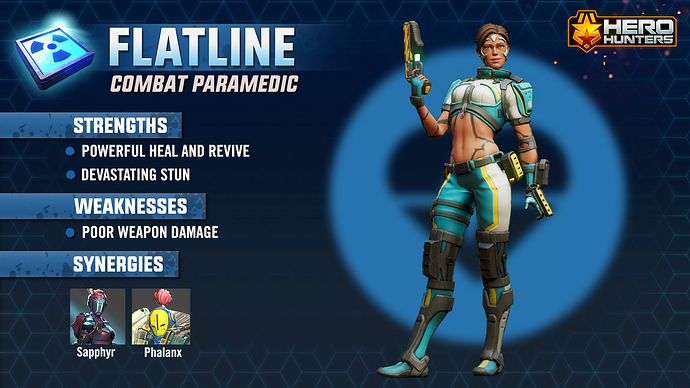 What do you think of Flatline?

Any hype here?
I unlocked her and accidentally spent all my fragments on her because I somehow thought that Oracle (who looks better!) was supposed to be a bio character.

Anyone have anything comforting to say?

I kinda dig her so far? Just starting to level her up so who knows how she’ll play at higher levels but as a support character I think she’ll slot in nicely for PvP. The res ability has the potential to be a huge momentum shift in a match so I think that as more people start seeing her out in the wild, they’ll realize that she’s a priority target. Because what could be more irritating than spending the first part of a match cancelling out an opponent’s Dogface or Mandrake only to have them come back to life and wreck your team?

The ramp up time for that skill is pretty lengthy though so I suspect that she’ll frequently be cleared out before she has a chance to pop it but that’s to be expected I guess. Having it charge really fast would probably be too overpowered.

Cool. I’m looking forward to upgrading her.
There are mainly 2 issues:

You can also test her out in duels for platinum, gold or silver just tap on default and some options pop up for different ranks

Smart! But I’m afraid it takes the thrill away a bit.

Good point! Still not accustomed to making use of the duel mechanic.

As for her poopy damage…that’s kinda the cross that support/healers have to bear in shooters right? You include characters like that for their skills and whatever they can chip in for damage is just gravy on top. I mean, it would just create a new, more irritating meta if she could heal…and revive…and stun…and output lots of damage. Being too good at everything is how we end up with “must-have” heroes which really shouldn’t be the goal for a game where the core hook is hero diversity.

This is gonna be so broken… goodbye PvP …

Question:
Her Bronze skill during my test run didn’t do any self-damage. Is that so, if no ally is dead, that this skill doesn’t do self-damage?