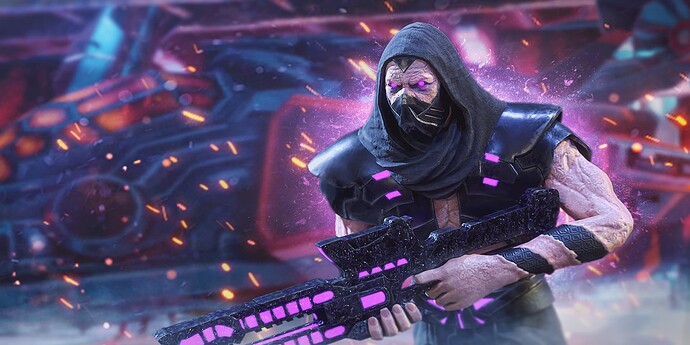 Rumor has it that Enigma was a normal human once…. trying his best to survive in the world after day Zero. Having lost everyone he cared about, only his survival continued to matter. Before long, he joined a bandit group of like-minded survivalists, without any pesky morals to hold them back from doing what was necessary.

One day the bandits’ scouts got wind of a rumor. There was a new discovery, an extremely powerful element called “Purified Heronium” and a hefty batch of it would be transported not far from their location. Not wanting to miss an opportunity, they devised a plan to intercept the patrol and take the loot for themselves.
When the time came, they attacked the patrol, and their heist went about as well as they had expected. After securing the container, while checking the loot Enigma was enthralled by the Heronium and stashed some of it for himself without anyone else noticing.
Everything was going to plan… until reinforcements of the patrol showed up. The battle that followed was bloody as they were caught by surprise by an unexpectedly vicious force. Unwilling to suffer major losses, the bandit leader ordered them to abandon the loot and retreat to their hideout.
Unaware of who they were dealing with, the reinforcements gave chase, likely having discovered that some Heronium was taken. While running for their lives, the Bandits stumbled upon an unsuspecting group of survivors in the woods.

The Bandit leader hatched a new plan and ordered the culling of the survivors. He wanted to make it look like they were his bandits, and that there was infighting within the group so it would look like they hadn’t been the ones behind the heist.
After the dust settled, Enigma decided to plant part of the Heronium he stole on one survivor who was on death’s door, in the hopes that this would make their pursuits stop chasing them.

As they were no longer being pursued following this deception, he thought he’d gotten away with it. However, once they got into the hideout, a purple hue emanated from Enigma’s backpack. A few moments after being noticed, an explosion occurred with Enigma at the epicenter.
Concussed and disoriented, the surviving bandits looked toward where Enigma had stood, and instead, they saw a figure malformed by purple flames. His whole body was scorched, radiating a purple hue but still somehow alive.
As he was visibly injured, some went over to try and offer him medical assistance. Their good intentions were rewarded by being grabbed and having life force drained out of them, with Enigma’s vitality being restored in the process. Panicked, the bandits started shooting at their former partner in crime, yet each inflicted bullet wound was quickly closed, and it was them who were dropping dead… Only one bandit was able to run away and survive this encounter, spreading the tale far and wide.

Enigma soon felt his newfound powers were a blessing and a curse. Every waking moment he felt agonizing pain, with relief only coming when he drained the life energy of others. Discovering some corrupted heronium in the debris caused by the explosion, he incorporated it into a new armor design that both partially numbed the agony he felt, while at the same time hid his deformities. Then he acquainted himself with KLG, the only faction that he felt might welcome a monster like him. Now known by the callsign “Enigma”, he satiates his hunger and prolongs his agonizing existence by draining his foes in the field of battle.

Enigma is the newest 5* Hero to join the battle.

A powerful and mysterious entity that uses the power of the void to steal life energy from his enemies and transfer them toward his allies.

Curse of the void

Marks an enemy on the battlefield, afflicting them with [Soul Drain] for a duration of seconds. [Soul Drain] causes a percentage of the damage inflicted via weapons to the marked enemy to be reflected back as a heal to the heroes that caused the damage.

If the afflicted enemy dies during the duration of this ability, all Enigma allies receive a big amount heal.

Each time an enemy is affected by Enigma’s abilities, they are marked with a [Mark of Decay] stacks.

Any damage to the targeted enemy caused by this skill heals all Enigma allies for a percentage of the damage done by this ability.

Percentage of all damage done by Enigma is transferred as a heal to all allies of Enigma, including him.

If Enigma’s target has an active Mark of Decay on them, Enigma does additional Elemental damage to them per shot.

This hero is invincible for the first few seconds of the game and receives 50% attack speed.

How can I get Enigma?

Enigma will be available in Crates and through Co-op Raids!

This going to be a fun hero.

Okay I just read the first two abilities which are absolutely dope, and I wanna say, it feels like my mind has been read, I have been thinking about making a hero that drains health up and recovers from his wounds and heals himself via his abilities, this is soooo cool,

Edit; When I’m done with everything for the day ima see if I can put together my concept I had and show how similar I thought their abilities were

Just a quick question; his ruby ability icon has the her “Magnus’s” face on it, would it later be redesigned to include this new hero along with magnus?

Good catch! The reasoning is the skill itself

Awesome (but imbalance) skills and boring generic backstory. Seriously, this is just another person with sad past who become living monster after contact with heronium. Revenant, Keir, Slurp, Cyphon, Pariah, Callidius, etc. I really miss something interesting like this was with Panzer (including video with her story also discovered back of Steele and UAF Airborne), Luciana, Icebox, MK2 (with all forums events), Ursus, Dreadnought… Each of this heroes have something unique and put in action by their wish or direct will, not like victims. This is really cool!

Character designs are definitely improving. I’m looking forward to this one. Please start making astral and void fragments available so we can upgrade these guys!!!

I’m just glad KLG Irregular’s are featured, i started in April 2021and haven’t seen them been featured so im psyched.

Hey there! Thank you for your feedback! Regarding the story, let’s just say there’s more to it than meets the eye!

Can we get his mythic skin where he’s wearing just an orange coloured underwear and nothing more than that? 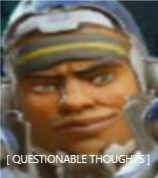 no copy/paste from FFG drawers

where is the real gamechange that was promised

VOID and ASTRAL fragments as bounty rewards, increasing by milestone.

How is the void element a bad thing, literally everyone is asking for more, I mean we have a ration of like 4 astral - 1 void,