Armor Up tosses an armor pack that provides an allied Hero a charge of Armor Up.

Each charge of Armor Up provides a small shield that absorbs damage and provides an additional bonus armor, to a maximum of 5 charges.

Each shield lasts until destroyed. When a shield is depleted the allied Hero loses a charge of Armor Up

Whenever the allied Hero is damaged they spend a charge of Counter Measure reducing the incoming damage by a percentage, dealing damage and silencing the enemy attacker for a period of time.

Whenever an allied Hero loses a charge of Armor Up or Counter Measure they recover health.

Whenever Caine critically hits an enemy he reduces the cooldown of Armor Up by 10%."

Where can I get Caine!? 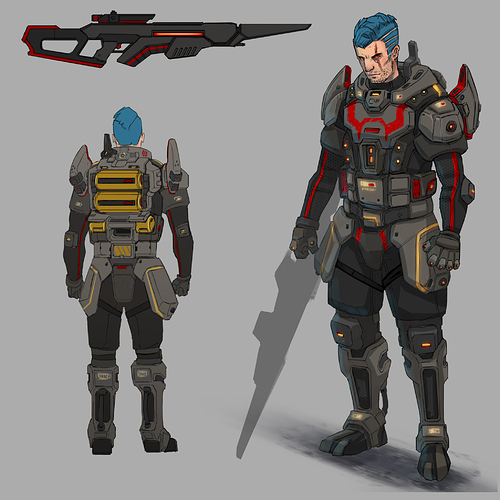 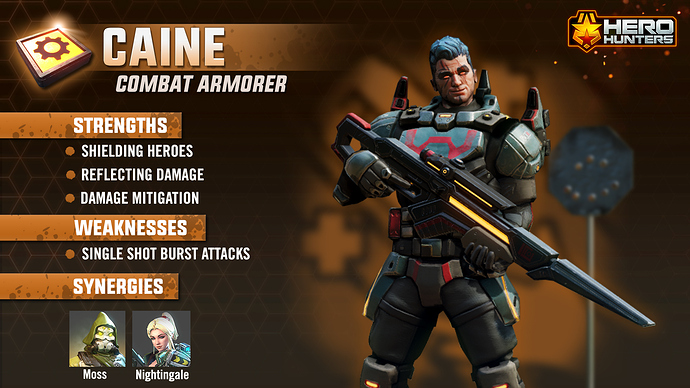 What do you think of Caine??

Hivemind has an KLG support opposite number!

Update: Getting a chance to mess around with this guy, and he is definitely on Hivemind’s level when it comes PVE support. They are both vying for that MVP position.

I think skill cool down may decrease slightly

He clearly have a mustard and a ketchup dispenser on his back, ready for a BBQ.

can someone explain me how Caine’s platinum skills work ? my understanding is
allied heroes gain bonus critical hit and bonus critical hit damage.
I ran some test with dogface hitting matador on gauntlet sector 5 with his basic shots the damage is 19946 and 34177 for a critical hit.
When I added Caine with dog the damage are the same.

thanks guys if you can enlightened my understanding

Can we discuss anything Caine-related here?
My Caine is my ongoing Platinum project. I now have 3 Gold bars and all equipment in place for a promotion to Gold+4 - except for the canisters. Tomorrow’s raids will be Mech Raids so that’s when I’ll get those canisters I need.
However what’s my best focus until then? I don’t wanna spend my energy on looting canisters from Campaign and I have no idea what other equipment he’ll need at Gold+4. Is Golden Throwing Knives a safe card? Shurikens? What Platinum items does he need? As I understand I can’t find this out in the game until I actually promote him to Gold+4.

The item guide is your best friend

I forgot that one existed! So my best shot is to collect golden rifles and platinum pistols. Thanks.