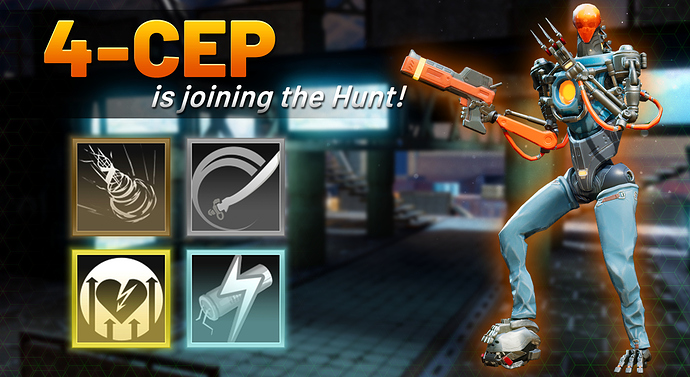 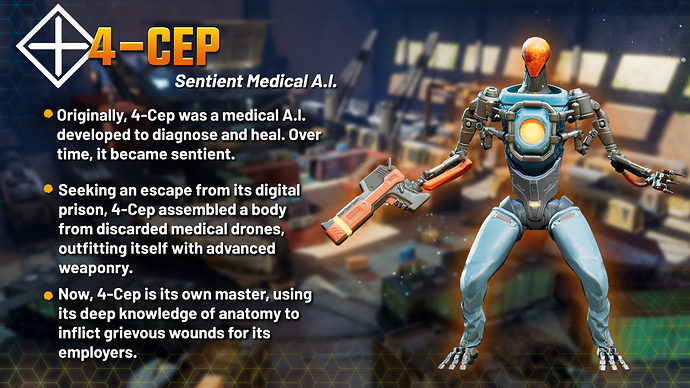 4-Cep, the Sentient Medical A.I., is a rear-line fighter who picks off its enemies with power laser and scalpel attacks. Its ability to revive itself by draining Health from its teammates and a hardened body resistant to damage makes 4-Cep a frightening force on the battlefield.

4-Cep fires a precision laser that continuously deals Elemental Damage per second to the targeted enemy and reduces their Armor. The laser lasts up to 5 seconds, or until cancelled.

Whenever 4-Cep is killed, it siphons each allied Heroes’ remaining Health and revives itself after a 5-second delay. Upon revive, this Hero recovers Health equal to the Health siphoned from the allies. This Hero also gains extra damage for 5 seconds. 4-Cep can only revive once.

4-Cep implements superior nanobots to harden their exoskeleton, reducing all incoming damage against the body by 25%. The head is still vulnerable. This Hero also gains extra Damage.

4-Cep will be available through Co-op Raids and Crates!

What do you think of 4-Cep? Let us know!

Amazing! Loveeeee the Terminator reference! Ahhhh, this guy is gonna be sick!

He has come back to the past to terminate Ryker, ending any hope for the dismal future

ummm can it be 3 stars

One, his pants terrify me. Why is he wearing pants that cover his legs (and not his crotch) and why doesn’t he wear any other clothes? Is he trying to draw my eyes to his crotch? He doesn’t have anything in his crotch area, why would he do that?

Two, everything depends on how the character works, but a good DPS character that infinitely self revives, reduces damage and has a 15 second heal block is very potentially OP. He also has a tiny head, so that Achilles heel is pretty well protected.

is this going to be another Shivs? A op Pvp hero?

And @Grasher think about sap. She does a healblock really well

Imagine this guy with someone that gets a boost when their allies die (like Kurtz). From the description alone, this guy’s silver, gold and plat skills are all top notch. If everything else isn’t balanced out well he’s going to be OP.

I really like Saph. She isn’t an insane DPS character, but that heal block really makes her damage mean something.

A mech who has no face, Edward Scissorhands, and nifty pants? Yes please! Kinda bummed that he isn’t an actual mech medic, but it’s a nice addition to the mercenary team.

Looks good fun, how many times can 4cep revive?

Interestingly, he probably won’t be good to have paired with Ifrit or Flat, cuz then he doesn’t get his bonuses on revive.

He’d be a decent hero to pair with Ifrit. He self-revives after 5 seconds, so he’d never trigger Ifrit’s plat, but every death of his would trigger Ifrit’s gold, and eventually stack a monster amount of health onto Ifrit.

Great call grasher! Now that I think of it, it’ll ‘revive’ Ifrit’s status. Even Shank will greatly benefit from 4-Cep. Excited to try some different teams out! HH, you’ve been on a ball with these new heroes!

This dudes got some potential! Looking forward to him

Honestly, I would have called him Freddy Kruger.

If this guy gets a new skin, would we call it the 4 skin?

I’m happy to see another Killer Robot like Clyde but robot in jeans 0.0

Also that’s the most broken Gold I’ve seen as of yet.