We will miss you all(developers)

Muninn, are you hiding something?

Nope! We’ll miss you too!

Noooo you are all my fav devs

First and foremost, this news is both sad and exciting (?). HH has built a great game here, so their departure is sad but it’s exciting to see the energy another company will inject into an already established game. I’ve never played a game while a transition of power has happened, so I’m interested to see how this plays out long-term.

Daily Quests
These can be and have been very repetitive if you’ve been playing this game for years. @J_A_D_O had a great idea on how to switch things up, HERE.

It could be even simpler if they were just randomized daily.

Crates
Some of the crates are rather redundant. Most players have all the seven star characters at this point. So the 7 Star Crate doesn’t do anything for us besides sit there. The Gilded Crate has been ignored for months on end while the Gilded HERO Crate and Forged Fantasy Crate get updated constantly. Problem with this is, players aren’t receiving tokens for those crates like we’re able to receive Gilded Crate tokens. The Custom Crate isn’t doing anything. I don’t know anyone who is subscribed to that. Possibly new players? I have no idea honestly. The Skin Crate should be updated fairly often with how important skins are these days, yet the Skin Crate hasn’t been shown love since the introduction of Plus Skins, January 2021.

Stores
The PVP store, Gauntlet store, Alliance store, and Heronium store need some updating. Better gear options, ruby, astral, void gear would be appreciated, along with fragments for astral and void characters and even some fragments for FF characters since they aren’t completely available to players like the other characters are.

Campaign Mode
The lore of this game is engaging. Adding stages beyond 14-10 with more story would be great.

PVP
New brackets after Legendary is long overdue. As one of many players with a roster of 10 stars, added rewards would make me want to push in PVP again. As it stands right now, I don’t have much of a reason to play against everyone sandbagging Verrill just for heronium and bucks.

Co-op PVP is nice in theory but it’s been broken since its release. Someone starts a thread complaining about Co-op PVP every single time that event comes around. It should be addressed somehow.

New Game Modes
The roster of characters continue to grow but the amount of things we can do with the multitude of characters does not. I know that in War, the back end of my roster is useless. In Bounty, I don’t use the characters that don’t have their bonus. New game modes that intrigue and excite the player base and make use out of older characters is ideal.

I mentioned this before too but I’d like to see a sort of Player Town added as a feature to this game. We use resources to create buildings, level them up, grow our town, and reap the benefits of that overtime. Plenty of other games have this feature, I could see it doing really well in this game.

Special shout-out to the Realism PVP game mode that was both an April Fools joke and fun to play. It was a great game mode (for the one time we had it) and I’d like to see that return.

Gilded Festival
We get Gilded Tokens as rewards very often. Yet there’s no reason to use these tokens since the Gilded Crate is never updated as mentioned earlier. The Gilded Festival was a very appreciated event that offered rewards for spending all of your hoarded Gilded Tokens. Players have been desperate for this event to return. It’d be nice to have this event be biannual, at the least.

A Fair Balance
I understand this one is a bit tricky. One of the most appealing parts of this game for me has been how accessible this game is for spenders and free to play players. If you need something in this game, it is within your reach. If you can’t spend for it, you can grind for it. I came to Hero Hunters from a very spend heavy game. I wouldn’t call Hero Hunters pay to win because I know what that looks like. However, things in Hero Hunters have been moving in that direction. This is where I mention skins like referenced earlier. Skins have grown in importance. They are no longer simply aesthetic. A useless character (sorry MK2) becomes the number one ranked character in power because of a Mythic Skin. That’s fine, but Mythic Skins have terrible crate odds now. They were at 4% chance and now they’re down to a 1% chance of obtaining them. If that’s how it has to be for the company to make money, understandable. But since these skins have grown in necessity, they should be released at some point for players who didn’t get them through crates the first time around. That hasn’t happened yet, not only for Mythic Skins but for some Rare Skins like LoveStruck Cross whose skin has never been offered in any event since its release as a scavenger hunt reward. Point being, everything in game should be obtainable for all players at some point. As it stands right now, if you don’t get a Mythic Skin upon its release, you don’t get it at all. It’s discouraging. The release of Astral and Void characters have pushed things in a pay to win direction as well. Spenders who max them out will do better in War since they get a higher bonus. The majority of players aren’t going to spend to max these characters out. Then in PVP, they’ll sandbag with them just for their bonus, but it just makes the PVP environment exploited and unbalanced. I’m hoping that there can be a way to return this game to its roots of making everything obtainable to all players while the company is still able to profit greatly to sustain itself.

Last, two new characters named after Skathi and Muninn in remembrance of the last standing OG devs! (they should both be OP lol)

I’m excited for the future, here’s hoping that DECA adds some new voices for all those heroes with copied voice lines haha.

Wow feel like vent time… ruby is not balanced damage doers increase so significantly more than tank or support. Many heroes become pathetic at ruby because they’re support and get wiped out easily by damage doers. Tank ruby skill for cover damage has got to go. Not only is unfair to support but the minimum level shots destroy cover so there is no advantage to adding bars to ruby. Should be replaced with basic armor and health. Tanks are not beefy against damage doers. Support should be split into healers with increased healing and skill cooldown and basic armor. Then new support can be basic damage and elemental armor and oppose damage doers. I think fisher jarek and few others be better as this new support and pris and hideo could be damage doers. Also like to see all ruby get stat increase to health and armor. Battles do not last long at ruby compared to plat therfore many heroes don’t cut it currently.

sweet you can start with making a 50m war bracket

I was in at the beginning of a very successful game called Empires and Puzzles. Started 3rd day of release. Much more difficult to draw heroes than here, but grinding kept you in the top for the first 2 years, then $$ started taking over. Year 3 or so they were bought by Zynga and things began to get ridiculous. New “improvements “ rolled out and $$ was the only way to get them. Our alliance was full of old school grinders, ranked anywhere from 1 to 5 at any given time and we fell like a rock, just couldn’t keep up. Many, including myself, quit a game we loved because it became PTW. Please don’t let that happen here

Whatever will be happened, I just hope this game will not turned into another pay-to-win game…

As for myself, i want to know reasons…
Reasons why some ideas from the players can not be implemented…
Or if it will be / can be implemented in the future…
Maybe a rough time schedule forecasting could help…
This way we could know / hope that things gonna be better and better…

I like the idea of putting in a bunch of new updates to the game cuz we only got a few new stuff over the years BUT, i hope they don’t make it too easy to do things and make the game boring than it already is for higher level players. Though they also need to make it appealing for new players. One thing i wanna see an improvement on is the anniversary event. I think it should be something rare and exciting to see and not something that repeats every few months.

Also, will they also be working on the other hothead games or will HH be their main focus?

the only games they will be acquiring is HH and KSB

I’m not trying to start anything, but would like to know what was the driving factor in selling game over to another company? Was it revenue based? Was it because the community got too demanding? Was it because updating content became too difficult due the the older code? Just curious? Is Hothead concentrating on other projects? These questions were not meant to demean or put the devs in a place for others to pile on. Just curious what drives decisions like this. Also, same kind of question for DECA? What drew you to this game?

it was very nice to meet some hh devs, especially skathi, and thanks for the duels we had in the devastation events, I think this will be a goodbye I hope they do very well in their future projects. I suggest you say goodbye with one last DEVASTATION event, and save a very nice memory of my favorite developer. 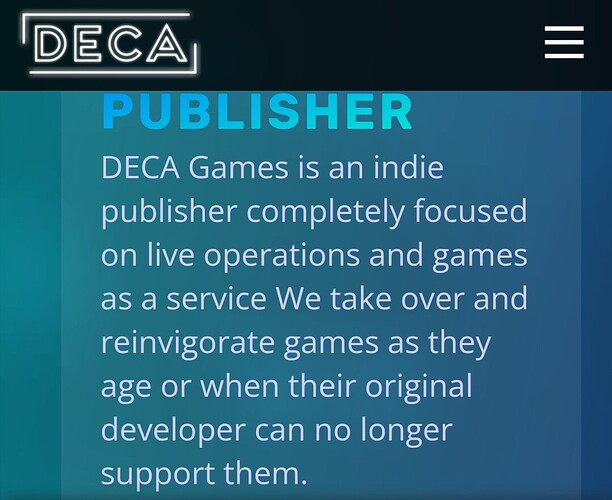