The Anniversary Update is COMING SOON! 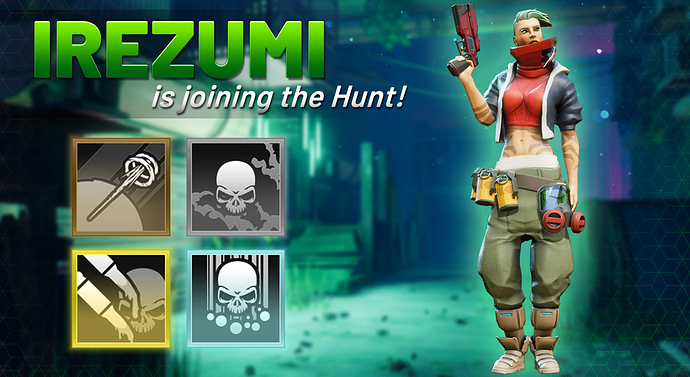 Irezumi, the Deadly Ink Master, joins the Hunt! Turning her venomous tattoo ink on her opponents, Irezumi excels in powerful Damage Over Time and debuff Skills that leave enemy teams in shambles.

Learn more about this Hero on her Hero Spotlight: https://bit.ly/2U7JcuP 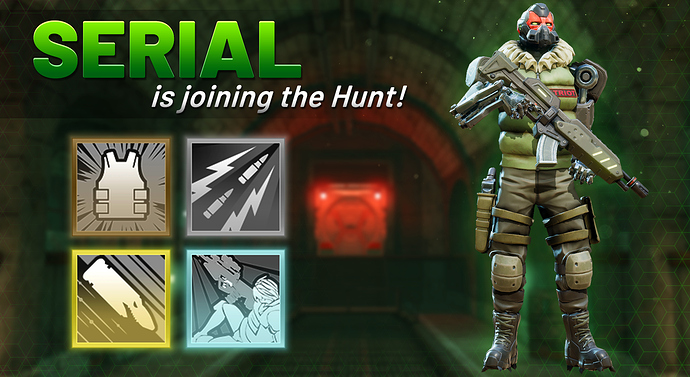 Serial, the Cryogenically Frozen Super Soldier, joins the Hunt as the newest 7* Hero! This Mid-Line legend possesses strong DPS Skills and self-buffs, plus debuffs and the ability to attack from beyond the grave, making him one of the most relentless powerhouses ever to terrorize the battlefield.

Learn more about this Hero on his Hero Spotlight: https://bit.ly/2OcalsB

Check out all the exciting new Skins coming, and how to get them, over at https://bit.ly/2HackcS 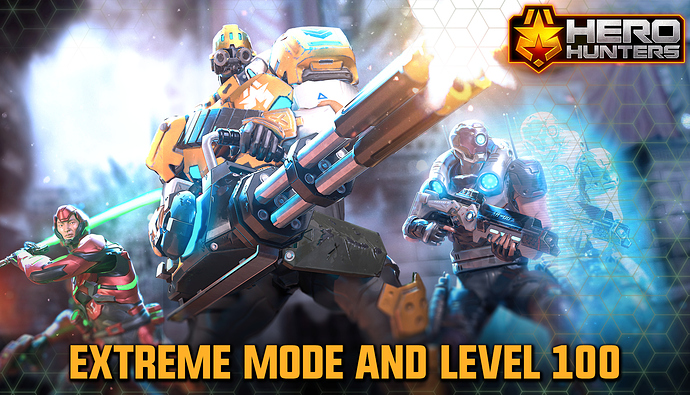 Extreme Mode is our newest difficulty setting, taking its place alongside Normal and Hard Mode. You’ll need fully-upgraded Heroes to take on this challenge!

What are those new Gear items for? Read on!

Grow your Heroes to even greater heights by ascending to Ruby Grade!

When your Heroes reach Platinum +5, you’ll notice that they’re still able to equip Gear items. Those Gear items, when fully equipped, allow your Heroes to reach Platinum +6 once you have the Anniversary Update (version 3.0) installed. After a Hero reaches Platinum +6, they can equip Ruby Gear and eventually break into Ruby Grade!

Note that you’ll need to raise your Heroes to Level 100 in order to achieve this new Grade level. 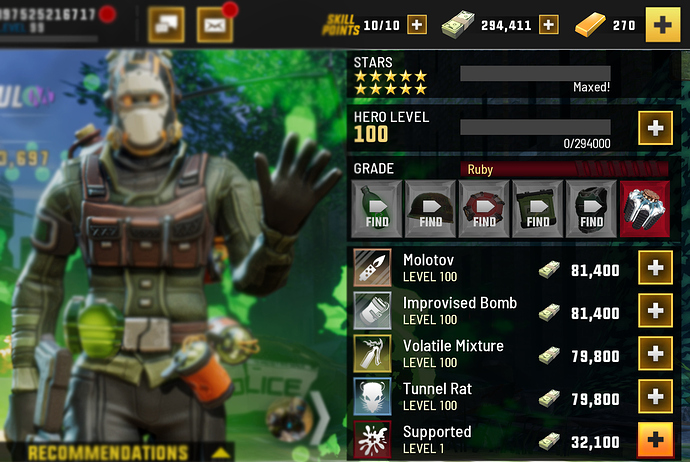 There are three Ruby Skills: each is designed for either DPS, Tank, or Support Heroes. Depending on the role a particular Hero fills on the battlefield, they’ve been each assigned one of these three Passive Skills.

Sorry, the Ruby Skill a Hero has is predetermined! You don’t get to choose which one they get. This means that everyone’s Kunoichi will have the same Ruby Skill as a Passive Skill.

Ruby Skills will either help a Hero lean hard into their specialty, or make up for their shortcomings in some way.

Ruby Skills start at Level 1, and take Skill Points and Bucks to upgrade, just like other Skills. Don’t sleep on these Skills if you want your Heroes to rise to their maximum power potential!

To celebrate the addition of Ruby Grade, every player will receive a Ruby Core MK I, for free, via inbox message! These Cores will be rare initially, so use it wisely! 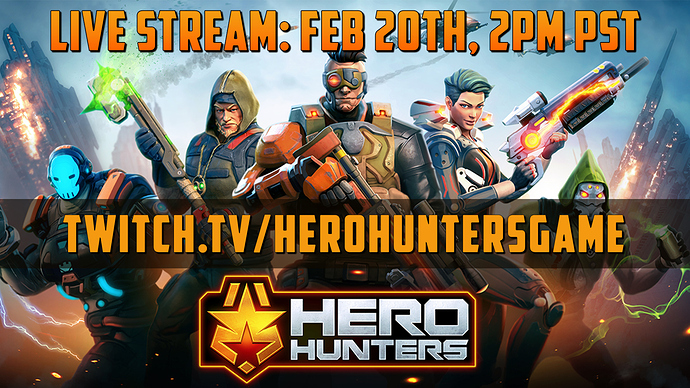 We’re planning a developer livestream to show off all this great new content! Join us at https://www.twitch.tv/herohuntersgame on Feb, 20th, 2020 at 2 pm PST!

The Tagged Crate continues the tradition of having great prizes, including Irezumi’s exclusive Skin Tagger and Gilded Tokens !

NOTE: You’ll need to have a Team Level of 40 to unlock the Skins function and equip your Tagger Skin if you win it. If you win the Skin from Team Level 35-39, you’ll still own it, but you won’t be able to equip it until Team Level 40.

From March 9th, 2020 at 12 PM PST to March 16th, 2020 12 PM PST, enter the INFECTED Event to earn Tokens, which will give you a chance to win the exclusive Heronium Infected Rare Skin for Serial!

Take on the Gorgon and collect Infected Tokens:

The Infected Crate continues the tradition of having great prizes, including Serial’s exclusive Skin Heronium Infected and Gilded Tokens !

NOTE: You’ll need to have a Team Level of 40 to unlock the Skins function and equip your Heronium Infected Skin if you win it. If you win the Skin from Team Level 35-39, you’ll still own it, but you won’t be able to equip it until Team Level 40.

Wow, Ruby! This looks great. Super excited for the skin events too! Ruby + 7?! Even better! This is an extraordinary update!

You guys are the best.

This update looks phenomenal, you guys have really outdone yourselves with the Ruby upgrade, Level 100, all of the dope skins, and Extreme mode! (Not to mention the Prophet buff, I will love wrecking face with him now).

(P.S. @LordNikon I agree, Irezumi looks better with the skin than her default tbh).

Absolutely! HH, way to go! Can’t wait for the update to drop!

Put MK5 and Mk6 cores in the Alliance store!

FINALLY THE BOMB IS LAUNCHED … 5TH SKILL … THIS IS THE REAL CHANGE TO THE GAME … THEY WILL CHANGE MANY DYNAMICS IN PVP…
IT’S TIME TO OPEN THE NEW BRACKET, GUYS!

Wow, I’ve never been more excited for a update. This is amazing. The heroes look beautiful in the ruby grade.

I’m excited for this update to put a large gap between pay to play and free to play players. Hopefully the level 100 and ruby players are split into a higher power bracket in pvp thus removing a large amount of players from the pvp pool the rest of us play at still.

Thanks.
Now i had to work more on my concepts.

Is Category “legendary” (1.5m+) unlocked? Asking for a friend.

OMG. Both new heroes’ skins look amazing. Thanks for that.

no, never.
we had to suffer together forever

Very cool stuff! Makes it even more odd that people complain about a game that lets so much be had for free. Appreciate your time spent designing the game.

Although most is good, completely disappointed that nerf is Caine and not 4cep. 4cep is all over pvp and takes no skill to play as. I kill max 10 star heroes with 8 star plat +2 4cep that’s not balanced. Klayton still worthless was hoping I would be able to upgrade but since he’s just a meat bag with health and no damage,I’m glad I waited for notes instead. I had pvp match end up with me having near full health klayton vs ronin with maybe 3 shots left and even though I waited out shields and stunned I couldn’t get a single shot to hit ronin.

@Muninn Sir I would also like to know if the next PVP and AW brackets will open up now? Gauntlet bracket, etc. etc.

I will say that I’m going to miss Caine’s 3 iconic floating orbs.

New PvP brackets open as needed. Note that “needed” isn’t based on sentiment or feedback, but on the data our back-end tools gather from all PvP players and matches, so don’t spam us with requests for it, please. I don’t have a definitive date for if/when a new bracket will become available, but we’re aware of the feedback. Thanks!

Awesome job on the Razorback and rifleman buffs.