Hero Crate and Fragment Update in 0.9

The most notable change here is that a 3 Star Hero duplicate will reward 60 Fragments, where it previously generated 35 Fragments. 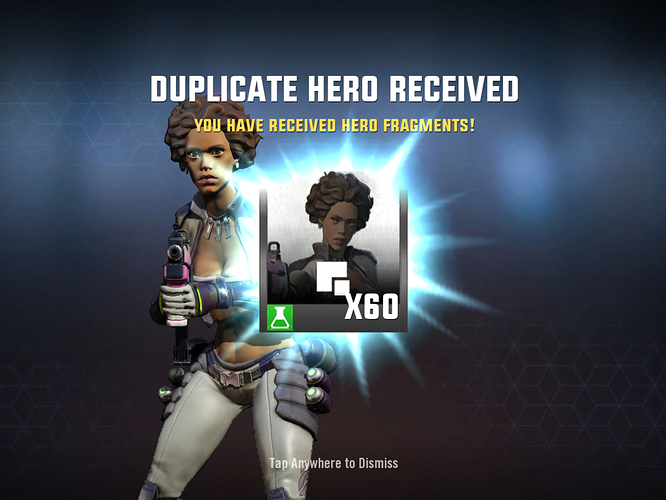 The Fragments per Star have also been updated with this change. you can find a chart detailing the changes below. 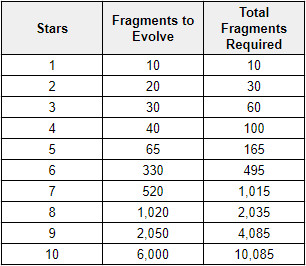 Do I understand correctly that you increased the fragments needed for 9 star hero? From 1,500 to 2,000? So you’re telling us that you are giving us more fragments because gold aint worth shit now, and then you are increasing the amount of fragments needed. That is insane.

I gotta agree with @Golfwang9.
This doesn’t seem fair either.

Besides… still no universal fragments coming back?
U realize how hard it is to even get to 10 stars? Even with ur new setup?

That way it’s all about the money.
The only way is by buying a crazy amount of hero crates. Which u need gold for. And those amounts of gold. Require money. Not fair. I’m sorry

@W4L, @Golfwang9
My initial post was not entirely accurate I’ve found out. We poorly communicated what was actually done with this change.

What did not change was the total number of Fragments to reach 10 Stars. That number stayed the same. What actually happened was that total value was redistributed across multiple Star Ratings to create a more smooth growth.

@Huginn
I also agree with @W4L and @Golfwang9 on this one.
I understand that the total amount of fragments to get a Hero to level 10 hasn’t changed, but it has become harder to get a hero to level 6, 7, 8, or 9.
So now it’s even harder for new players to evolve their players.
The only ones who benefit from this update are players who already have characters at level 9.
Everyone else has to get more Hero crates to level up than they did before so it doesn’t seem fair
Only way to get those crates is by spending money on gold.
So All and All I think it’s a decrease of the gameplay again…

This game with update 0.9 is now bullshit… why increase of frags from 350 to 1020 for a 8’star… thats insane… again co op does not give hero frags anymore and the same gold or silvr frags again and again… if you want to update, update that… why such updates does not come … i donot know… this made the game very strange as u now only have to buy too much frags for better star heroes and that is very hard…

I steadily watched this game go from an amazingly polished, thrilling and rewarding gem to a steamy pile of cash grabbing garbage. All while the developers lied about how it was for performance and rebalancing purposes and would provide greater value which it never actually did. Basically they made it sounds like the price of gold was coming down but in fact with the changes in 0.8 gold became heavily devalued. You pay like 5% less per piece of gold but gold buys like a tenth of what it used too. 300 gold used to guarantee 5* and I got five 7s in my first 10 pulls so rates were great. Now guaranteed 3 and no 7* for 300 gold. Seriously Hothead if you didn’t plan the pace of your game properly and people were advancing too quickly then you increase the top tier like 11* characters you don’t cripple the entire pace of the game to a level where new players can never hope to compete with existing players and where the campaign content is still geared towards when characters started at 5* and a third of the gacha pool was above 7*. I was stoked to feel like a game was rewarding me. When I could get my 7* character up to 8* with 350 frags slowly building up a stock 3-5 frags at a time from shop and missions. It would have taken forever but it was a reasonable level of grind for a f2p player but now it is incomprehensible to think i’ll ever see a 8* character. It also helped a ton when I received 40 gold a day for being in tier 1 of pvp and with daily missions 30 gold reward I could do a Hero pull every week if I played daily but now there is no such system and no such motivation. I even kept collecting gold this whole 0.8 update hoping that things would turn around in 0.9 but it seems the course of this game with each new update is simply to make minor balance tweaks to characters and massive core system changes that hinder the growth speed of players to a level where purchasing gold is the only option. I hope someone at Hothead understands that simply writing “better value” or “improved smoothness of growth” as buzz word while knowingly doing the opposite of destroying value and decreasing the smoothness of growth is unethical. Saying that 3s now give double the frags but evolving requires 3 times the frags is a net loss for us not to mention we used to receive frags for minimum 5s with the chance of 7-9* characters and elemental frags. This game does not have enough depth to survive without the gacha aspect and now the gacha aspect is near worthless and provides little to no benefit while at the same time the update removed a lot of ways to farm frags. So the two points of progression of gacha and raids for characters were severely nerfed and thus the progression is too slow and unfulfilling to justify even playing not alone paying money to compete. Gachas don’t work when there is nothing in the gacha worth risking gold for. A 6 star prophet just isn’t going to pull in same number of pulls as a 9 star one and knowing even if you get him that you’re going up against people who have him at 9 star is discouraging to say the least. They should have just kept things the same and reduced the rates of 7* and above heroes. Anyways I’ll check back in at 0.10 but basically you pooched your game… maybe it was necessary and the game couldn’t support itself financially the way it was designed originally but you needed to make logical changes.