“Go with the flow or be the flow”

“Ever felt energy flowing through you before? probably, but not the way i do!
My name is Tempest, at least, that’s what they call me. You know, the violent storm, or, The Storm of wind!. Except I didn’t get this name by doing something with wind. pfft, boring.
I got my name from the storm part. a storm of lead!!”

Tempest, aka Lee Weyland is a (Super) soldier, as he likes to call himself. while all he is is just an over energetic man with an advanced kinetic bodysuit, also called the 3-GKD.
This suit allows kinetic energy to be stored and used for offensive capabilities. Such as acting as a power supply for his rifle. or as a last resort of his continuing destruction

Lee is a man with nothing to lose but his endless amount of energy.
Lee does not give up. He will continue until it is either done or until his last breath.
He has been serving the UAF for 4 years. He started his military training in the UAF at the age of 17 in 2023.

Now with enough experience he got transferred to the Guerilla Forces of the Rangers where he started his first operation called “Pinpoint” .which consisted of traveling back and forth in time in order to change specific events and collect materials that could grant them the upperhand in the war.

[speaker] ATTENTION ALL ASSETS PLEASE REPORT AT THE OPERATION TABLE
[Alvarez] “The attack on our previous base cost us a lot of our equipment. With what we currently have we won’t be able to make a significant difference in this war. i am hereby Commencing Operation Stockpile”
“I’m assigning a squad to travel 7 years ahead into dangerous territory to gather necessary equipment that can aid us in this war. The first place you’ll search is at the UAF base.

“Radon, you are the lead of this squad. Raijin, you are assigned as the Frontline.
Lunora, you will assist the team in any technical roadblocks. Tempest, you are protecting Lunora. Prophet, you will scout ahead of the team to tag and eliminate any opposing threats.”
“You drop in 5!”

The squad readied up and stepped onto the time travel platform.

Once dropped off they took a look around only seeing the base they got dropped from completely demolished.
After a decent walk they came across the giant concrete jungle, the buildings have mostly collapsed forming a concrete like desert.

Upon arriving at their destination they noticed they were not welcome.
In fact the first sign of contact opened with a hail of bullets, they quickly ran for cover

[Tempest] “Damn is this how you treat your own”

The gunfire took a halt and a female voice took the silence.

“You have 10 seconds to identify yourself and give a good reason not to shoot you”
[Tempest] “We have a common enemy. We just need some of your stuff”
[Female] “Unless you’re UAF We ain’t giving you a damn thing but lead!!”
[Tempest] “Well. I happen to be an ex-UAF trooper, we are here with a mission under Mandrakes command.”
[Female] “we’ll negotiate under our terms. Though I hope you have any expectations!”

The squad got blindfolded and taken inside.

Once inside their blindfolds got removed. They were in a dark room with what seemed to be at least 6 people with guns pointed at their heads.

[Tempest] “What lovely welcoming we get from our own. This how you treat all your guests?”
[Female] “you! I don’t want a single word coming from your mouth! Let the others speak.”

Lunora poked him with her elbow.

“You’ll get us killed if you don’t shut up.”
[Tempest] “hmpff, Fine.”
[Lunora] “Mandrake sent us here.”
[Female] “Mandrake is dead. Has been for 4 years now. 1 more wrong answer and we’ll answer back with lead, we don’t have time for your games!”
[Lunora] “We are from 2027, we kinda messed up and changed the present there a bit.”

[Raijin] “Well, actually we are from 96 years ahead of you. We messed with a device and it took us a couple of years back. Yes we messed up but with the right equipment we can change that. We can fix everything. But only with the right gear. Which is what we’ve come here for. You are probably our only chance!”
[Female] “hmm. Mandrake did mention about some kids dropping in and messing things up. But the time travel stuff gets over my head. I don’t believe a word of it!”
[Mysterious man] “I might just be able to change that.”

The mysterious man took his hoodie off. Showing a bald head and a red beard. It was Mandrake.

[Mandrake] Good seeing you again, Savanna. (Oracle)"
[Oracle] “ but how? I saw you get killed 4 years ago! That’s not possible!”
[Mandrake] “You see. I have tricks of my own. I was off for a retirement anyway. But it’s good to see you again!”

Oracle walks towards him and punches him in the chest.

[Oracle] “That’s for disappearing (punches him again) and that’s for staying hidden all those years!”

[Mandrake] “Yeah. Coulda seen that one coming.”
[Lunora] “Thanks for backing us up! I Didn’t know you came with us.”
[Mandrake] “huh? No, I didn’t come with you guys. I’ve been here all along. I saw you 5 sneaking by my base”
[Raijin] “Base? But it was destroyed. All the buildings collapsed after the incident we had back then. What were you still doing there?”
[mandrake] “Well, I figured if I wanted peace that would be the least likely location for me to be.
Once I spotted you guys sneaking by, I knew something was up. so i followed, once i witnessed you guys getting almost lit up i figured it had to be something really important. So I decided to sneak in here.”
[Lunora] “why didn’t you reveal yourself earlier? we could have been killed!”
[Mandrake] “well. Clearly I’m not risking my retirement for nothing. wouldn’t do it for nothing of my concern.”
[Lunora] “Prophet, I thought you had us covered?”
[Prophet] “I can not see what is not visible. Mandrake uses an advanced cloaking device, my model does not support thermal vision to detect that.”
[Oracle] “ enough talk… What do you need?”
[Radon] “anything you offer. we were told this was the place to go.”

Oracle, Mandrake and the squad took off to their armory with Prophet staying outside on the watch.
Around them is a huge amount of weapons, high tech armor and tools.

[Oracle] “take anything you need. if Mandrake is on this it has to be a major thing. not like we will make a big difference with such little manpower.”

They took a lot of armor, weapons, repair tools and a Carrier mech (unarmed Galante) with lots of rechargeable batteries for Walker Mechs and a sturdy supply of heronium.
while barely ready a callout came through the comms.

[Prophet] “Large hostile battalion heading our way”
[Oracle] “ they must have heard the gunshots, prepare to defend! I want all troops defending that mech! it might be our only hope for a future!”

Not long after they went back outside gunshots were already scattering and echoing through the normally lifeless city. Soldiers from the UAF were aligning across the defenses.

[Prophet] “scanning… counting 2 Gorgon mechs. a commander. a dozen field medics. and an estimated centuple ground troops. advising to take cover immediately.”
[Radon] “Lunora and mandrake! escort the mech to the teleporter. Raijin, you help Tempest with the troops. prophet, take out the commander and support! I’ll take care of those mechs! Go go go!”

As gunfire ensued the number of troops from the UAF started to cripple down to a mere dozen. a UAF frontline trooper emerged from the building taking the frontline with an oddly thin suit.

The enemy’s commander marked the frontline trooper causing all fire to be focused towards him. the earth beneath him started to shake and waves of destructive energy came from. underneath him. it seemed like the more bursts he shot the larger they became, decimating the enemies frontline.

The focused firing stopped and the frontline trooper collapsed. Tempest ran towards him dragging him back to cover, checking for a heartbeat, with unfortunately no luck.

With the enemy frontline still being at large Tempest decided to put on the armor while Raijin provided cover.

[Tempest] “Wow, it’s a perfect fit! Let’s see what it can do!”
[Oracle] “just be careful. it’s not made for absorbing that much energy!”
[Tempest] “if this thing couldn’t take that much it would’ve already crumbled under mine!”

Tempest started firing back at the troops…

While his firing rate began to accelerate the ground started shaking and collapsing underneath him.

It only took Tempest several seconds to erase the enemy frontline.
At the same time Radon took out the gorgons.

With no troops remaining the squad took their return to the payload.

[Tempest] “Oracle, do you mind if I keep this?”
[Oracle] “Well, the thing is that barely anybody can withstand such power. He was the only one of us who was able to handle it well. I’d be pleased if it stays in good hands. Take care of it and never surrender it. No matter what.”
[Tempest] “I’ll be sure to keep it in good hands.”

[Oracle] “If ever there would be a scenario where you can potentially lose it. If you keep firing when you start to collapse it will automatically use it’s last resort. you can figure what that means."
Good luck to you all.”
[Mandrake] “It’s good to have seen you once again Oracle, but I have my retirement to attend to.
Later kids!”

Everybody waved goodbyes. since they can’t take people back as it will overload the Platform.
The squad took off to the Platform.

[Lunora] “with the batteries we got we might be able to restart and repair the mechs laying all around our base. We can make our own army now. With this we can actually make a difference in this war!”

They traveled back to 2027 where the Rangers began to recruit more members. Since they are able to provide weapons and gear.
Lunora and a group of engineers got to business with working on the mechs laying all around their base. 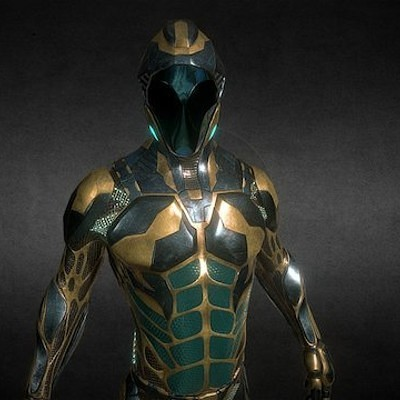 Bronze: “Flux” opens the flow conduit. allowing infinite charge for his rifle as long as the trigger is held.

This ends "Flux"
(charges with 6% every second)

Gold: “On target” this hero enables his laser once activating his bronze. Reducing the recoil and spread by a decent amount

Platinum: “Seize and Release” Provides immunity to cover-break staggers while also
distributing the kinetic damage to his cover. Dealing damage to cover equal to any %HP lost whenever “Flux” is active

Additionally, whenever this hero reaches critical state (25%) while “Bronze” is active this hero becomes invincible for 6 seconds and then explodes, destroying all cover, staggering and dealing large damage to every asset on the field. killing this hero.

“Doing damage”
The difference between a good DPS Hero and a great DPS Hero lies in the amount of damage they can dish out. This Hero receives a decent amount of extra elemental attack damage as well as a 30% Skill Charge bonus for their Bronze Skill

Love the character! He and Verril together would be a very powerful DPS duo when both their larger mag abilities are added, making them unstoppable combined with good healers and shielders.

You’d need a reaaaally strong hero in order to prevent tempest from entering critical state. Eventually at some point he would just kill himself within a couple of seconds