[I really need to re-read the guidelines for sourcing images, or refrain from posting them in the future.]

Bronze : Natures Hand
Groots arm extends and one arm forms a shield of branches grabbing the targeted opponent surrounding them, rooting the opponent for 12 seconds, whenever the opponent does an action like ; trying to move, reloading, pressing shoot button they will get a medium amount of damage and refreshes 1 second of the ability, this ignores shields and the arm can be broken, it has a decent large amount of HP and the branch shield reduces incoming damage by 45%, : charges slowish like Oracle

Silver : Ultimate Sacrifice :
Grabs a teammate and then starts wrapping itself in a ball around them for 15 seconds, the ball has an extremely large amount of HP , it starts regenerating a good amount of hp every second and for every second a small amount of extra attack damage acts as a shield to the ally, the ally can not shoot or perform any actions but still charges ability cooldown, if the ball gets destroyed the effects will stop and Groot dies : charges in 20 seconds

Gold : Little : when Groot activates his silver he leaves a small root of himself, if he dies because of the silver the root starts growing into a new one, after 10 seconds he will be functional to shoot and charge abilities and has half the usual HP, after 20 seconds he will be able to use his abilities again and has normal HP

Platinum : I Am Groot :
When groot uses his silver he will release 30 glowbugs, these seek and distribute amongst allies, every glow bug heals a very small amount of HP, Groot now has a decent passive health regen

Ruby : Supported, A skilled Support Hero can’t help their team if they’re down for the count. This Hero gains an Armor bonus and a 30% increased chance to dodge

Gun : Not really a gun : Grabs a malfunctioning prison drone he got when he escaped the prison
Stats :
RoF : 5 rounds per second for each barrel the drone has, so 10
Damage per shot : super low
Magazine size : infinite

[I really need to re-read the guidelines for sourcing images, or refrain from posting them in the future.]

Bronze goes as forward: extends arm and does the other one in front of his face, wraps around opponent, when damaging branches sting the opponent, when destroyed the arm breaks and he does an animation where he grows it back in 2 seconds, otherwise he just reverses the first action

Silver goes : both arms go to ally, they extend in a ball, meanwhile he slowly disappears branch by branch to the ball, when destroyed it just breaks, when survived it reverses animation

Gold goes : the root will grow taller branch by branch, after 3 seconds it develops a face, then a more human like body, legs, then it stands up and grabs his gun, whilst growing branches just grow until he looks like normal

Platinum goes like : simply just have glow bugs flying from him

Thanks for reading, others coming up soon

Yes. Make this a thing. Now.

Don’t forget to source your images as per the forum guidelines!

Muninn, will you check the concept i made for you? Besides, i couldnt find a way to link the source, it was just light blue and unclickable

copyright claims galore. if this was for a Marvel game, sure but to have a unique tree character you gotta be very unique when it comes to them

Your options for tree characters are basically groot or treebeard.

well those 2 are probably the best known. there have been other tree like monsters/characters in other media. its just gonna be hard to be original with a tree

You got it man

If you post an image that you didn’t create, find out who did create it, and source it. This can be done by providing a link to the original website it appeared on (not the Google image search link you got it from) and naming the artist/entity that created and owns the artwork. If it’s fan art, you’ll need to source the artist and, where applicable, note who owns the character.

Example: If you’re posting fanart of Predator, you’ll need to link to the artist and name them, and also note that Predator is owned by 20th Century Studios.

Next time, I’m taking the whole topic down. Ask somebody you trust for help if you’re still having difficulties with this.

Okay thanks you, don’t want to cause trouble 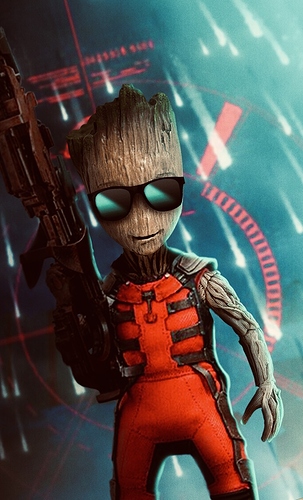 That is the most amazing thing i’ve ever seen, both favorite characters in one