“The world is now in vain. But what we need now is not fighting the enemy but saving what we love. Touch a hair on my allies and you will know what it means to lose everything.” 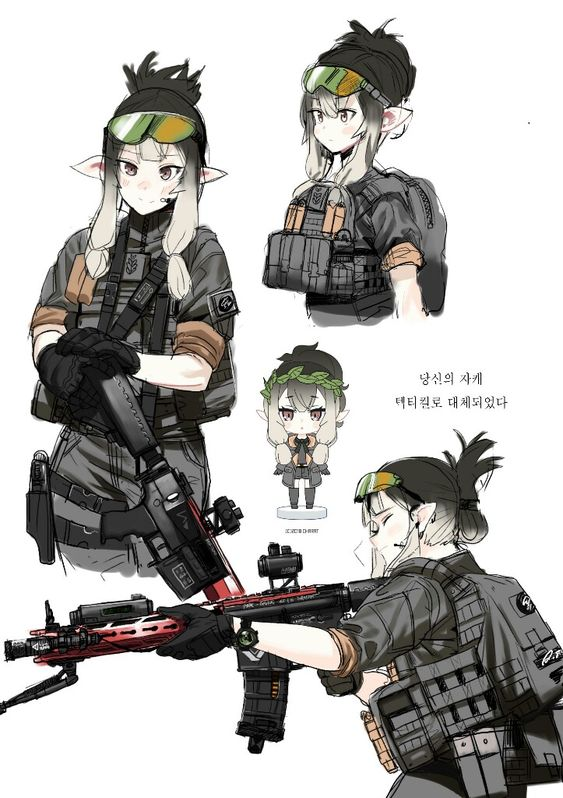 Angelika was a lively female. She always believed in her team and her faction. She’s the motivation for the faction to continue going, the reason why the faction even existed in the first place.

She has been working as a medic at UAF, but she was missing something. She was heartbroken seeing the soldiers at UAF in so much pain, so much hurt. She believed that we should be fighting to save things that we love, not hurt more people. She believed in a faction that prioritized in rescue and protection, not taking down the enemy headfirst. She left UAF to find this “ideal” faction. But to her misery, none has fitted her expectations.

She was living out in the Outlands, surviving day by day. The only thing that kept her going was her optimistic view of her situation and her medical skills. For what seems like a year has passed, she reached the final faction in the area, an unmapped faction, the Renegades. She kinda lost most of her hope, but she kept trying. She met with Silver and Severo. The two took her in and when Angelika told her story and quest to them, they took her to the Renegades’ leader, Enzo. She was delighted to hear that the Renegades, although did partake in crossfires, never left any soldier behind. She was accepted into the Renegades and was proven a valued member of the faction.

From that day on, she became the main leader of the Renegade Covert Ops team. She was both a strategist, a great field medic and motivist for others to believe in a better life afterwards.

Description: A tactical support. Great at contributing to firepower while exceptional at sustaining allies, even when they are exposed.

Xz7Dto5MhSS1Li3D0cNxWIF77j0Z42iHHopuvaVn64xI3FtUkBx9PEl20lc3Muf8_PiHmyC2kda43vV0zxmzIZ2pmBtn_TxaGJc7R0RpUnqzkvh0TuRv_tYg1-O6Ik9UxJREui6g512×512
Bronze - Staggerer - Replaces Angelika’s current ammo with specialized bullets which deals x more damage while healing the lowest health ally with 115% of the damage dealt to the enemy. If all allies are at full health, her damage output deals 10% more.

8WngYj-TvCNelAIam2u87hx7vPVi9ahdRTbRPJAA9lcHSEyCFnvdB7WCHoMvmH8A25fPoQ_ZeOkZMpgR4m4Tt7h9q1RS4cs5LssyFAJC_0FH1caYs2eJQw0rV76wIKvB0vrhVFVO512×512
Silver - Motivations - Rallying her allies, boosting their damage output by x and armor by x for 10 seconds. If an ally receives lethal damage while [Motivations] are active, the ally gains a shield with x health and boosts their damage output by 15%. This boosts lasts until the shield is depleted.

VZE0pP4uaAAC_1GWGjrJzyz_kZZMisN-YVR29qTcYXGB24CT65IbvY0D62N793r1593iVkKEIU5nykp1SkavSVkWuIHQPhRd2NEYajnE_8B8xj2zx6GJSIIWnDSm28HoEbuVJ_Tz512×512
Gold - Search n’ Rescue - Whenever an ally drops below xx health, recover xx health per second until they reach xx health or they reach max health. If the ally is damaged while healing, the ally gains a small shield for 5 seconds. The effect does not trigger when another ally is healing.

pnkYKcYKZLoQ9X76YhvmYuNqQAx8RPG-8Y24-QpNLwMsUypYtil2J-v8jpCa1oWYYlEjdXLDaGLNde8b-62lcw4lJyCz7SuF7HKINViCjor2iC9ha2kGYoFRmKx27oRcD7_8Rbwn512×512
Platinum - Convalesce - For every shot landed on any enemy, her next shot is boosted by xx damage. This effect ends when she reloads. Also, for every ally standing, her initial damage output boosts by 6% per ally.

Creator Notes:
Angelika was created since healers nowadays don’t deal that much of damage. She is leaning more in the “damage support” than a “healer” since she heals a small amount to keep them fighting a bit longer while contributing damage to the team.

I dig it, I’m always a fan of heroes who fill in a unique role that balances other heroes

I can dig it. The passives seem a bit strong. Search n' Rescue seems like it might need to be limited. Like it can only happen once every 30 seconds. Or something.

I think I would like the Platinum a bit better if it triggers with one of the active abilities, like an augment to an active skill.

stop making heroes better than mine.