Help! Permanently desynchroized from servers, is anyone else getting the same message now?

So I was just happily watching an ad 5 mins ago when this happened… when I tab to dismiss and retry, the desynchroized message pops up again no matter how many times I have retried.

Also tried to reinstalled the game and login from another device, same error shows up…

Is anyone else experiencing the same issue? Or is there something wrong with the servers right now?

Ahh I see, what about the rest?

Feels to me that there is some server issue right now…

I am experiencing the same issue they must have turned off the servers for android users until IOS users get their update lol.

Same issue here. Reinstalled the game to ensure it’s not my local game that’s gone corrupt or anything. But still same error.

Seems like it happened for some users with previous updates as well. Hopefully it’ll be fixed shortly.

Yeah I have been getting that msg for 30 minutes now… 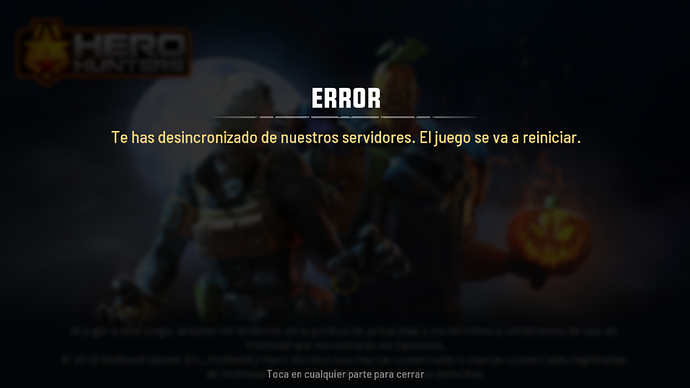 Ohh, seems like all of us andriod players are getting this now…

Someone please drop a message here when the game is fixed
No one subscribed for this, pun intended

I do get this message in the last 10 15 minutes

Exactly HHG got tired of all the B@#ching and shut the servers down to make APPLE users happy that we can’t play the game LOL. To all IOS users it is APPLE that is the issue with the new IPHONE and IOS not HHG’s fault that they can’t update the game on the store.