is anyone else facing an issue with the game freezing when trying to play level hard 1 for the gunderdome event??

Turn Background Downloading on and allow it to do its thing. A lot of people are disabling it, and it can cause problems if you don’t have all the content loaded.

thanks muninn. that worked.

What about those of us who have never turned it off? Will a forced update help alleviate this issue in the near future?

Maybe. But since the current problem is easily solvable, you can alleviate it today by turning Backgound Downloading on. I wouldn’t wait on an update.

But what do I do in my situation? 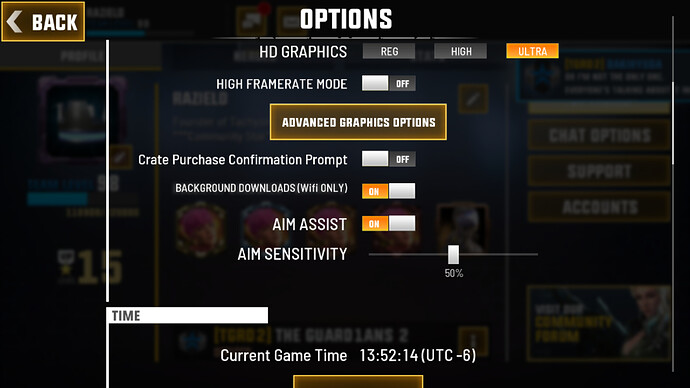 I don’t want to bombard you guys, but I’m seriously stumped. I’ve tried it offline. I did a fresh install.

When I did the fresh install, it took about 10 tries to re-download the assets for the stage. Then there was a lag between a frozen screen and then the subsequent yellow circle that doesn’t move. The yellow circle is now back instantly upon trying, but my game locks up and I have to force close it everytime. I’ve never toggled Background Downloads off.

It takes time for everything to download. If you’re doing a fresh install (not recommended, as it makes this problem worse) and instantly jumping into Hard, the system has had zero time to actually download what it needs. You may need to play a few other missions and give it time. If downloads are failing, that’s a local connection issue. Server health is nominal and we have no reports of DLC failing.

I suppose I’ll give it time. I have good service though. And I don’t play on Wi-Fi. What sorts of missions would I have to play? And any idea why it’s Hard.1 doing this and not any of the other stages along the way?

Update: So I used my wife’s phone to do hotspot wifi. Turned off my phone data, turned on my wifi, attached myself to my wife’s phone’s hotspot. Sat in game for about 10 minutes. Tried again. Nothing. Waited another 5 minutes. Tried again. And BAM! Got in. I don’t know why it couldn’t collect the data from my phone data, but I’m happy. Case closed on my end.

This is still an issue with a lot of people and it is still not working even though I have done the above mentioned with another phones hot spot and I have 5G and full bars and tried it at my library with their Wifi and still no go…there is some underlying issue not being resolved if more and more people are having this issue.

This has worked for me.

I had my Wi-Fi connected and played a few PvP matches before running the event.

I wish that were the case for me because I’ve done just that and still nothing…very aggravating to be honest.

Still its not working for me my game is still freezing after starting hard 1 level.