This has been brought up plenty of times and one dev (@Muninn I believe…?) said they would look into it; but I want to bring attention to it with an actual post this time because it’s causing a lot of confusion for newer forum users (and some experienced forum users as well).

For those that are unaware, certain forum badges can be used as a ‘title’ once you’ve unlocked them. The most common is the Editor title, but there are others that are usable as well - Poobgloob’s ‘Community Star’ for example.

My complaint with the current title system is twofold.

First, why in the world is Editor a title?? It isn’t valuable at all and doesn’t convey any useful information about a user - only that they’ve edited a post/reply at some point. Community Star is very understandable. It suggests that this user is a good contributor and likely knows a lot about the game and how it works. But why Editor?? It has zero relevance and furthermore - it confuses people. In any sort of publication, an editor is someone with a degree of power over what is getting written. There is a strong implication that an editor has some relation to the devs, whether that’s through employment or as a volunteer.

Second, why can’t every badge be a title? Surely if Editor is an option then everything else should be as well. If not every badge, then at least add some to the list of usable titles. How come I can’t display my “Great Topic” badge? It’s a distinct source of pride for me since I’m the only one on the forums that has it and I’m proud that I had a 50-like topic in the past. How come others can’t wear their badges that show they contribute? It would lend some credence to their comments/posts and help newer users identify those who have a little more experience with the game.

I believe that the forum service is hosted by a third party (Discourse), but I’m sure that the HHG devs have a lot of control over how it operates. If the title system isn’t changeable, then just let us know so we can have some peace of mind about it. But as it stands, it’s a very misleading and poorly implemented system. It has a lot of potential to bring clarity to what people are saying here, but it’s extremely under-utilized.

Bonus: Here’s a collection of some of the confusion that the Editor title brings:

What does the “editor” title mean? Are you employed by HHG?

The problem i have with the pvp

Every time on all the answers just mocking? Are you one of the editors or am I wrong. I say about the balanced team and instead of explaining on you copy paste or whatever you have how the matchmaking works.

i guess i mainly see people called “editors” that disagree, not sure how they are involved with this game or why they have that title but when i rant on these posts i’m not asking if anyone disagrees, i’m hoping that someone that makes development decisions reads my posts

And yes a lot of the people who replied to you are “yes” men, who tout the awesomeness of this game, especially that ULFPAM guy, or any “Editor” for the matter. Anyone who goes against these guys will automatically get shut down.

A lot of people don’t know this (I didn’t know it until recently mentioned), but the Editor tag isn’t actually a rank. Sometimes I see the “editors” being harassed by other people thinking that there a forum leader or something.

And here is the result of last time this was brought up: 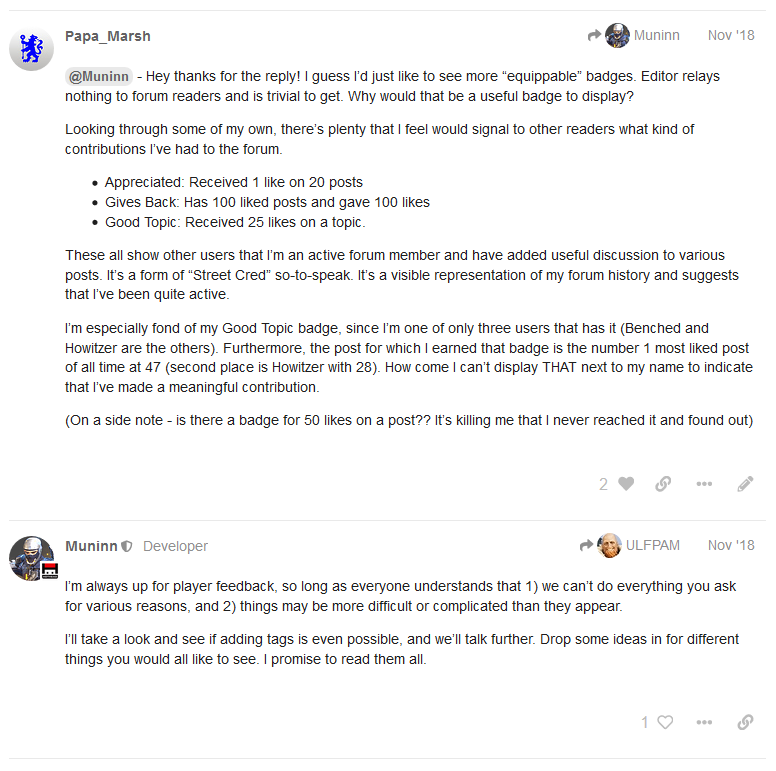 Our goal has always been to create an environment where Hero Hunters fans can meet as equals. After deliberation, we’ve decided that turning badges into titles only serves to gamify the boards, and that goes against our goals for them. Creating additional custom titles is a lot of work, and would only serve to further any perceived divides.

We think it’s important to acknowledge our Community Stars, so that manually-granted title will remain. Mod and Developer titles are important for differentiating sources of information. Aside from that, no other titles will be available on the forum. That way, none of our users are held “above” anyone else, and everyone can be treated equally.

I agree that the Editor title is confusing. To this end, we’ve disabled the Editor title. The only remaining titles are Mod, Developer, and Community Star, the latter of which will be granted sparingly and organically as we see fit.

Thanks for your feedback!