We have a fisher bug problem. Why does Fischer die when his first skill is too hot?

Take a look at the patch notes for the most recent update. His skills were reworked and his bronze now deals self-damage. With bonus damage, though it appears that he’s offing himself inadvertently instead of dealing “half of remaining hp” to himself.

Is the platinum the same way?

Fischer deals damage to the enemy equal to his current health. He recieves damage equal to 50% of the damage dealt.

Mathematically speaking, it’s impossible to ever half something to 0, yet it’s happening: (

So the change was released with the incorrect wordage? If so, that’s a shame to all of those who don’t read anything outside of the game itself.

This is ridiculous and needs to be fixed immediately with compensation for all players. The creators have transformed my favorite hero into a suicide bot.

This is coming from the same creators who consistently spell receives as ‘recieves’ on every character. I’m not really expecting them to think through their wordage much.

I think an unfair balance

If it would work as intended it would be a fair balance. But it does not. Mine does about 13 million damage with his skill so I guess they messed up the damage calculation, which leads to to much self damage.

Well, if Fisher is a rival, isn’t he supposed to die a lot? Unfortunately Fisher is dying when he’s a rival. This is a contradiction!

Yea, this needs to be fixed. What a waste to put him in, he kills himself instantly. You can’t take control of any other hero if you want him to live.

Not to mention the waste of resources prepping him for the event.

Thanks for letting us know!

Question about Fischer in Bounty: Here’s a scenario, an 8* Fischer will be 5x boosted for Bounty Bonus during Shoremen month… In this example he has 1 Million HP due to the health boost. His Grapple Dash does Damage equal to his remaining health, and the 5x Damage boost would mean his Grapple dash will do 5 Million Damage right? So, my question is, would Grapple Dash cause him to commit suicide? Considering he takes 50% Damage of the Damage he deals, meaning he would take 2.5Million Damage… …

Sorry, I just have to gloat about being right… hehe

Still does phenomenal damage tho, I’m not complaining ! 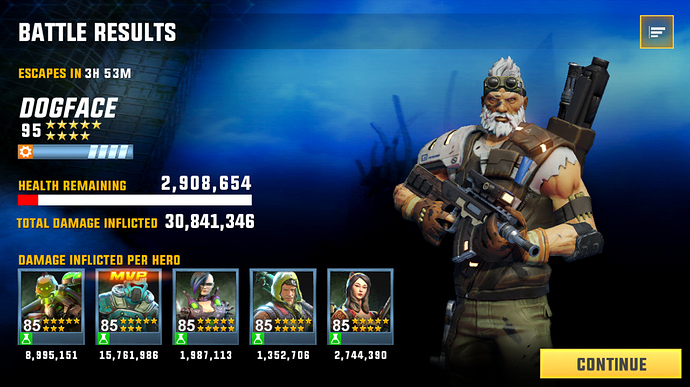 There is an issue where his self-damage is also getting affected by the Faction bonus multiplier. This is a bug and we’ll fix it. 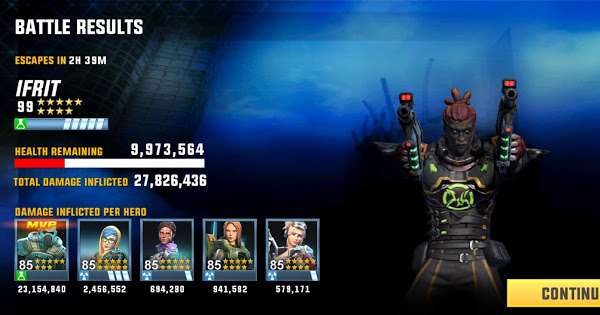 @poobglob Mines at 8* also but its hitting 23 mil