I think the best thing would be to have pvp be truely pvp. No bot opponents.

I suggest a 60 sec waiting room. If it ends without opponents, start another search. Bot opponents are frustrating in the fact that they have <5k points. If they have a similar amount of points as the person they are facing, the human player would not lose an immense 100 points when losing. Or gaining a measily 10 points when winning. This gives us zero insentive to play more than one pvp match a day, and only one, to get out daily pvp reward

@DSD, If the bots were better balanced and the points system changed to be less punishing on loss, would that help with the situation? Our matchmaking system always prioritizes other players.

Matchmaking does priorities other players, which is great.

And yeah, that would surely relieve some of our concerns! The reward for winning should be same or close to the punishment for losing.

But, for now anyway, a botless matchmaking system is out if the question? And if so why?

I would like there to be an option where you can scoop a match. Let’s imagine you get paired against all bio chem chars but all of you charachters are of the mech attribute, well then you are in a world of pain. Sure enough you might bring on or 2 down but ultimately you would loose. So a forefit button should be available for the first 5 sec of the pvp match. That ultimately speeds up the matches both players want to play when match to an even game 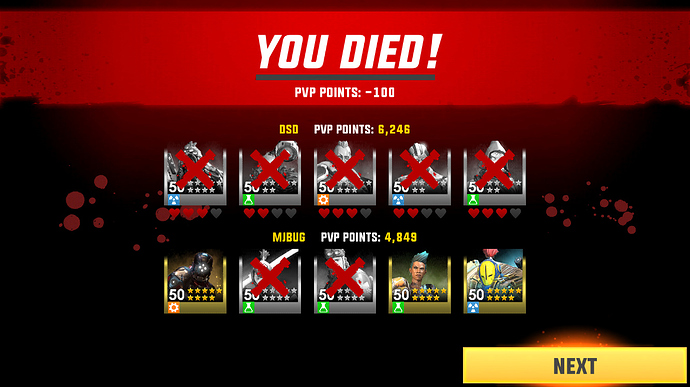 @DSD, We agree that this is a very frustrating situation. One of the reasons we created this thread is to collect feedback and ideas to improve PvP as a whole and it seems that this is currently the number one issue.

I just spoke with our PvP designer. She told me that the next release should help with this issue. Winning will be more generous with points and a loss will be less punishing.

But that’s not the end of the changes for PvP. We’re looking are possibly larger scale changes in the not so distant future. If you have any other ideas that you think will improve your PvP experience please share it with us!

@Huginn first of all, thank you for responding so quickly. This really gives me, and others, the feeling that we are truely heard in our problems/suggestions.

I’m very curious as to what ideas you guys have, and what you’re gonna implement in pvp in the next update. I’ve already suggested the no bot system, but aside from that, i have no further ideas at this time.

Imma call it a night rn, am on vacation in Kos, Greece, gonna sleep for like 12 hours now

@DSD, our plans for PvP for the 0.6 update, primarily, include some bug fixes and the adjustments to the points that I mentioned above. The larger changes I mentioned is something that our designers have been brainstorming on for a bit now. There are a few ideas that we will be evaluating internally before we announce them to the community. We want to present fully baked ideas. Your input definitely can influence the direction those designs take.

Please also encourage your alliance mates to join in the conversation as well!

Like @DSD said the main issue is meeting opponents with way lower points and most of the time lower tier, maybe adding some new tiers or divide up tier 1 so we can meet opponents with simular points

@Huginn damn man. Something to check up on for you guys.

It seemed PVP took a turn for the better. But i did a match just now, vs an opponent with 5.9k PVP points. I think it was a bot, because i didn’t recognize the name.

I’m not too happy atm.

@DSD, I messaged the appropriate person. We’ll investigate this today!

@DSD, we seem to have fixed the issue! PvP should be working as expected!

I just encountered a bot team in pvp, stronger then me, and they once again have only 4.5k pvp points.

I thought this was a thing of the past? The chance to either lose 90 points or gain only 15?

First of all, hat off for finaly fixing the pvp points for bots. I’m close to top 3 so i know i shouldnt complain that much. But i keep running in to bots that have +10k more power than me. A bit over the top i would say. A good game i could probably finish off one of them. But 31k against 41k is no contest. Am i just whining or do u agree that 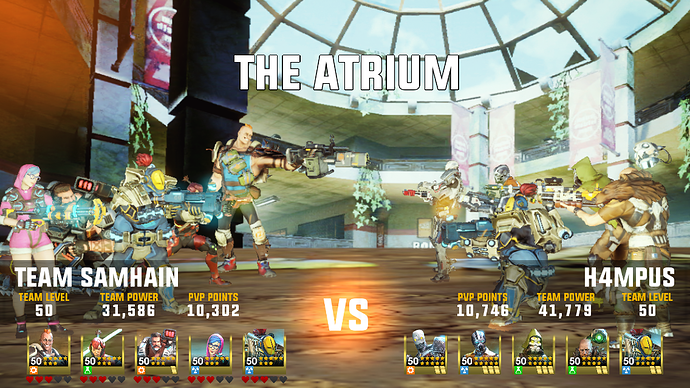 PVP sucks again. Just like Samhain is reporting, these bots are too insane. If I’m lucky I can kill 1 hero of the opponent bot, and the bad part is that I keep getting this bot.

I was enjoying PVP lately, and yes it needed an update to make it more challenging but this is too much. Please fix asap

Sorry for being so direct

@Samhain, @Freakpyromaniacs Thanks for reporting this. We deployed a fix the other day for Co-op, but it seems that it had an unintended change on PvP. We will be looking into this issue this morning.

Thank you for the quick revert!