Let me start by saying I absolutely love this game. I’ve been playing for the past 6 months, and am vip 13 with 400k power. So I do know what I’m talking about when it comes to pvp. The meta in this game 3 months ago was FABULOUS. Downright amazing. Now with the 2 most recent updates trying to “balance” pvp, it has only made things worse. All I run into in pvp is people who are exploiting the game mechanics. (Running 3 plat heroes and 2 silver and bronze heroes) not to mention people outspokenly keeping skill levels low to avoid raising their power levels. Forceful and jeffmykelldotcom are the two biggest culprits. This is ridiculous. They use these exploits in pvp to gain MILLIONS of points in the 25-30k power range. Most people In that range have lower end heroes and are no match for this “tactic”.

The Devs have said before they are working on “fixes” for issues like this…but when you’ve been saying that for 3-4 months…kinda seems like a load of horse shit to me.

Panzer was a great attempt to try and change the meta…and she did just that. She was a HUGE change. I for one think devs should’ve just tweaked her bronze skill to lower damage, and not have a full charge at round start. But then they threw the monkey wrench known as the “role rebalance” into the mix. This is an AWFUL idea. DPS heroes are meant to do damage. But the stronger dps heroes like dog, panzer, hardscope, and Clyde don’t stand a chance against a tank with 600k health, on top of 2–3 healers with revives healing them nonstop. You have to run ifrit at plat, and panzer at plat with flatline to even stand a chance in pvp anymore. It’s kind of dumb.

Just my two cents, but I definitely think the pvp should go back to how it was before this newest update, and stop focusing on revive heroes, and give us more with heal block, or more “nuke” worthy heroes.

With the most recent rebalance hotfix that went live yesterday August 9th, pvp does seem a bit more balanced…BUT it still need some work. They did hit the problem heroes, (nightingale, heim, panzer, and ifrit) but I still feel like DPS heroes aren’t where they should be.

With that said, I feel like a new breath of life was put into pvp again. I’m actually not finding myself overly frustrated at it today.

As I understood and as I already been staying today, more role rebalances are ought to follow. Let’s see what they bring.

Well in regards to the min maxing, I don’t have a plat 7+ star Flatline or Ifrit despite buying several crates so I figured I would just get any wins I could. Even that doesn’t seem to work for me as every team I face is minimum 5k points above mine, and the worse being over 12k…

Any game where the to 50 players are playing with the same one character in their lineup is a bad move by the devs. Look at games like LoL and Dota. You are going to have trash heroes no one plays, but your top tier heroes should be diverse. Synergies should be possible and expected. Heal blockers should DEVISTATE a team running 3 healers. Controllers should be able to lock down at least one enemy at all times.

I feel the problem comes from HH simplistic combat though. Cover should be more important. Average characters, even tanks, should not be able to shred cover in 2 seconds. We are at an impasse here. Weaken healing and they get blasted at the start, because it is impossible to protect another character. They are all vulnerable at all times. Strengthen it and you get infinite heals. Because combat boils down to your npc’s autofiring and spamming skills as the load, strategy goes out the window to meta and minmax strats.

Think if Pris lock down an enemy indefinitely in combat, but did little to no damage while doing so. What if Callidus heal block lasted 15 seconds and you had a button to tell the team to take cover, but the granades actually work because you have to get up and move out of your strong cover to get away.

We need more control, heroes need to be more unique. Waiting for skills to drop to be effective is dull. You can only do so much with that model before you break it. If anything, gold and plat skills need to be MORE powerful and unique. Not just passive bonuses. Peel off the fancy graphics and a lot of the characters are the same. Some variety would be nice. Just my two sense anyway.

@x_Majik_x, I agree on the PVP min-max abuse. 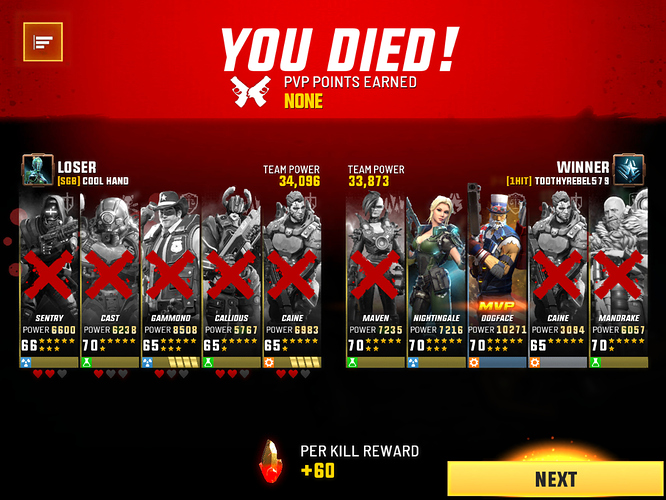 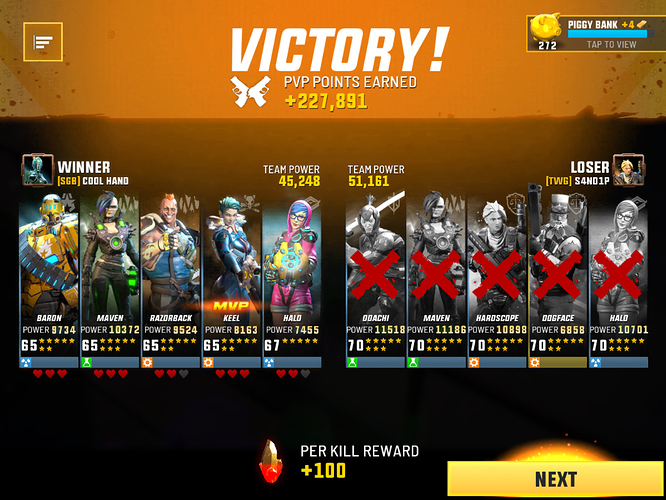 I had suggested before where the devs can stop this abuse by having the following parameters -
1, is highest star hero is 10* than the minimum one can run is 8*
2, if the highest is plat than the minimum is gold2

This will, literally stop the abuse of the system.

@Cool_hand the only think I can thank if with you is the 8 and 5 star, besides that it a really big difference.

@Deathleech you run bronze with plat hero’s, you’re min maxing yourself so yeah sorry but you’ll face people who do the same.

This doesn’t take it away that I’d you run 5x 7* gold hero’s as an example you’ll still face peoe who use platinum with bronze hero’s.

On point mic, they plan to do improvements in iterations and this first iteration sure is a nightmare. They really should have kept the old pvp and just added a PVP v2 game modes. Cycle between two during the resets.

@Kraterios, that’s why my suggested parameters would stop the abuse. If a player fail to meet the stated requirements than their “battle” button will not activate. Not that hard to write in the code. Just had a match where I run all plats and balanced team but got outmatch by a higher power team with 4 plats and 9*gold … how am I supposed to be match up such disproportionately with a team that abuse the system and they got away with it … go figure …

Is 4 Platinum heroes and a 9* Gold hero abuse per default?
How are people supposed to use their Platinum heroes in PVP if they don’t have enough of them for a full team?

See what is wrong with the picture below 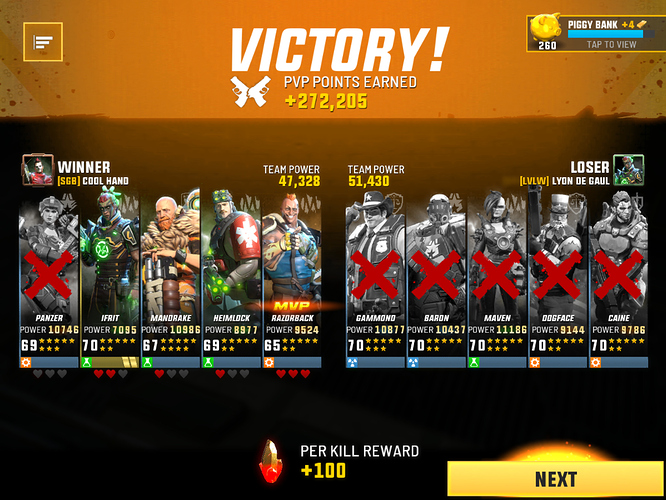 Picture one I run a full plat team and got penalised against a higher team power.

Picture 2, I run 4 plats n a gold2 again got Penalised for running that !

Where the hell is the consistency in matching …

@Deathleech you run bronze with plat hero’s, you’re min maxing yourself so yeah sorry but you’ll face people who do the same.

That wasn’t my issue. My issue was I was facing someone else min/maxing, but they were 47,523 power level while I was 35,111. That’s a 12,412 difference! They basically had an extra 9 star, plat hero worth of power over me. There’s no way anyone can beat that, no matter how bad they are min/maxing.

Is 4 Platinum heroes and a 9* Gold hero abuse per default?
How are people supposed to use their Platinum heroes in PVP if they don’t have enough of them for a full team?

Exactly. You can’t really put in limitations like Cool_hand suggests. My best team is all plat but I have a 7*, 7*, 8*, 9*, and 10* hero on it. I wouldn’t be able to run this team with his proposed change because my two lowest are outside the parameters of my one 10*?

Please note I didn’t intentionally level these heroes up this way. As a mostly F2P player, that’s just how they leveled. I have been trying to get my two 7* characters up for awhile, but without having easy access to shards in the PVP or Gauntlet store, it’s slow going.

This takes the cake on the spoofing abuse … 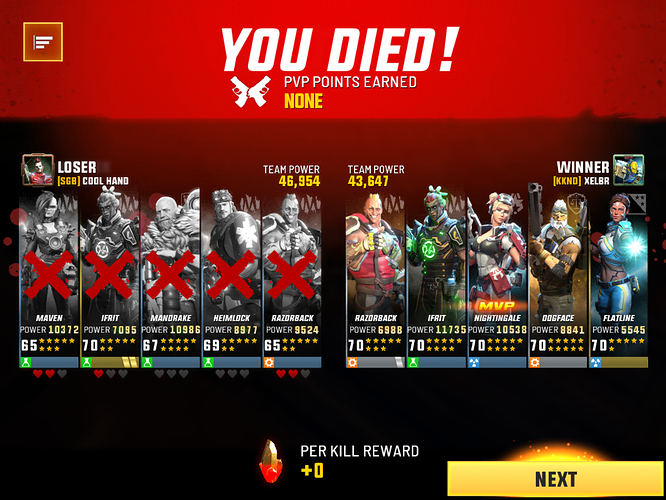 10* silver DF is not common

How the hell am I considered a known troll? Lol like who the fuck even are you? I’m stating my opinion on the failed mechanics of this game and I get called a troll? Lol please apply proof to your logic. I help all new players in this game in vip chat. You have zero evidence to back your “claim”. Please take you bullshit reply and kindly shove it up your ass kid. I never once said panzers nerf was too hard. Her nerf was fine, but then breaking the pvp is retarded.

You literally state in the OP that the August update was too hard on panzer and she only needed the bronze skill cooldown delayed.

Anyone who actually PVPs instead of trolling would know that Panzers shotgun is still like starting the game with a charged Dogface… she will dump 300k+ damage into the nearest energy hero within seconds. Only a troll would think that’s a healthy metagame.

Anyone who actually PVPs instead of trolling would know that Panzers shotgun is still like starting the game with a charged Dogface… she will dump 300k+ damage into the nearest energy hero within seconds. Only a troll would think that’s a healthy metagame.

@Sogui At 60k matches you meet heros with 350k-900k health that change the strength of Panzer, and the important ones are hidden by covers. Add this with improved healers and revivers then the game is very different. Panzer shoot a shotgun, and can’t aim for headshot just above the covers, and after the initial 20 shots she is very slow reloading. At 30K matches with 100k-400k health her initial strength might feel different.

Panzer scales like other heroes, she still offers the best burst in the game but her gold and plat skills gimp her in PVP. Hence why I made that thread “most skills in the game are not worth it”.

I do not intend to self-gimp my characters by taking skills that ruin them, but I’ve also tried my best to make the Devs aware. I run a 40k lineup and I still can easily put any energy hero into the ground (except Gold Vanguard lol).

Edit: Just after typing this my 7900 panzer killed a 9600 gammond without having to reload.

Edit: Just after typing this my 7900 panzer killed a 9600 gammond without having to reload.

, Panzer is Mech and got the bonus vs a Energy Gammon, in addition Gammon is Frontline so Panzer don’t need to remove cover. This is quite basic gameplay.

LOL I can tell by that “self gimp” comment that you’re most likely forceful in-game. And if that’s true, your “points” or “arguments” are null and void. And if not, you obviously know ZERO about pvp. As nail stated, when you get into the higher level pvp games the front line heroes health ranges from 450k-650k/700k. And Panzer was built to be a dps hero that could shred cover and expose problem heroes like healers, or to keep tanks busy. So please, educate yourself before you comment that I’m a troll and know nothing about pvp. And I said nothing about Panxers nerf being too harsh. The most recent hotfix was a little much, but whatever I’m versatile in pvp so I’ll figure it out.