I’ve just spent 700 gold on the essential crate… used all on quick wins for Platinum helmet fragments and only looted 6.

Is this just a glitch or what? It can’t be real odds… That’s £15 I just spent for that.

This is worse than EA fiasco with Star Wars.

I feel so robbed I am genuinely on the delete button for this game, after nearly 2 years.

Edit: Nvm you are not guaranteed stamina, how much did you end up getting?

2nd edit: Just bought a crate and got 150 stamina, Used it on 24 (9-7) missions and got 5 Plat bullets…That’s pretty good. That’s like one platinum item every 30 stamina, think that’s about the same as before the update.

Was able to finish off a gold 4 to plat hero and another gold to gold 1. Idk If I’m the luckiest guy on here on you are the unluckiest but hopefully this is a one time thing for you.

I have about the same ratio of items that you have, so I guess he is very unlucky.

Spend your stamina in hard mode, the drop rate is still the same there. It’s much better to farm certain items

My experience is completely the opposite.
I have already platinumed 4 heroes since the update. It’s a bit too easy to get them promoted. And I didn’t even spend much gold for refills.

I only have platinum heroes so maybe it is just that?

Will see when I unlock Min. Although I already have a ton of gold gear…

It’s a pain farming mk ii and iiii frags. About the same drop rate as you doped.

And spending real money on gold is to do this without a drop rate is fraud.

Well gold can be accumulated as long as you participate in gold PVP events, from PVP crates and dailies.

Yes that is 30 quick wins for Platinum items and just 1 drop!! 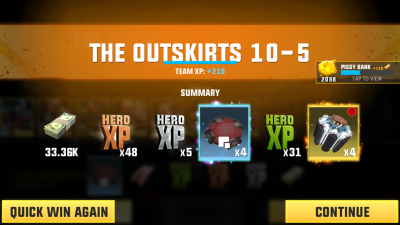 Just looks like you are having some bad luck. I think right around 3-5 would be the average amount of plat items you could get with a full stamina charge (around 125-160). Sometimes less, Sometimes maybe more, but I think that’s a fair average for the highest tier items in the game. Especially because when you do find these items available in shops/crates, they are extremely cheap for the amount you are getting.

Still believe that overall the process of crafting items and ranking up heroes is faster & easier then it was before this update.

It’s… Luck bro.
I’ve also noticed since the update you need less of certain gear items but they’re way harder to get.
Sorry Charlie.
It’s been impossible for me to get gear pistols.

yea, seems like luck buddy… I’ve gotten a few times where I’d do 20 quick wins and get 1-2 plat drops… but then I’d do another 10 quick wins for the same item and get like 4-6 drops of that item.

The only item I have really troubled with are Kare silver bullets. Took about 35 missions to get four. Did someone have the same trouble or am I just unlucky?