Cut ronin’s attack boost by half. With 4 weaker heroes it’s almost impossible to win without kunoichi or panzer

Honestly bc of these ronin sandbaggers, it makes this game so much less enjoyable! It irks me sooooo much when I see people just power up ronin then use him in pvp with whoever that’s weaker. There’s no strategy involved. It’s just cheap! The average plat ronin gets an average of 1500-2000 attack boost, multiply that by 4 is 6000-8000 more attack. The only way to counter ronin is if you have a stronger kunoichi or panzer. Truthfully I’m not going to set up my pvp line up just to destroy ronin Because it’ll be useless for any other set up I face.
I’m asking the developers to hear our complaints about this… nerf ronins ability by half… 8000 attack boost is just way too high! Anyone can win n that’ll make people like me quit because I just find it a cheap win…
To anyone who does this, you’re one of those people who just takes advantage of the system. If you win, does it make you feel good knowing you cheated your way to a win? Now ask yourself this, when you lose by sandbagging, how worse does it make you feel? Knowing you tried to win the cheap way but still lost… 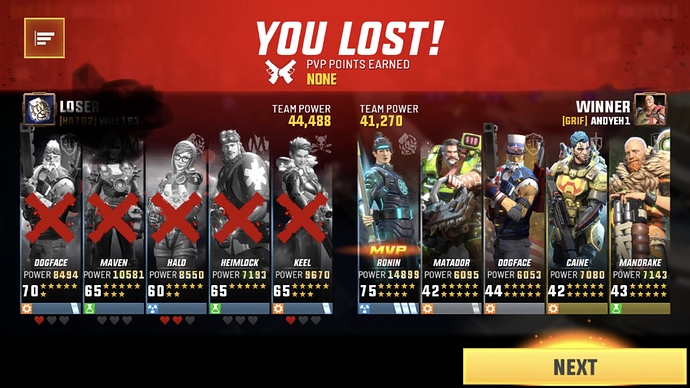 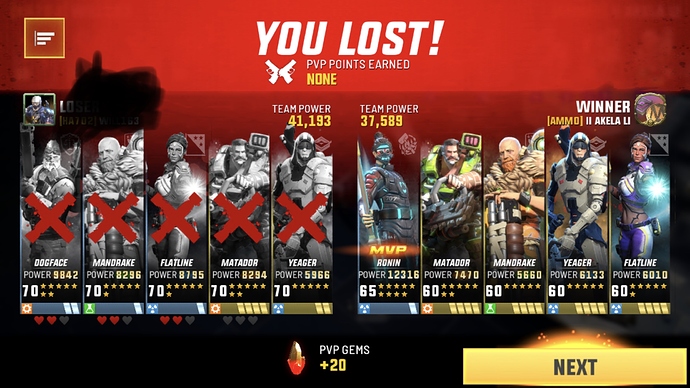 I dont think ronin is the problem. It’s how people manipulate their power level that’s a bigger issue. A good fix may be to punish min maxer-sandbagger harder. For example, instead of andyeh1 getting matched with you, he should get matched in the 70k power range. Force him to compete at his appropriate power level and see how quickly he will upgrade.

It’s already hard enough to get matched fairly in pvp. I don’t think devs will take the time to code that… easier to just slash down his attack boost .

Nothing wrong with PVP, I’m in the 80s and 90s most of the time, win some lose some, and I use Ronin on my A team every day. I see players crying about this broken pvp stuff all the time. Nothing is broken, pvp works well, grind on!

I’ve more or less quit, and Ronin’s one of the reasons why.

Honestly id blame matchmaking for this one. If said ronin player was fighting people at their power, they would stand no chance. Ronins HonorBound skill would be useless in a balanced scenario, because the design specifically promotes min-maxing of any kind.

You don’t find it broken bc you take advantage and sandbag with ronin yourself.

Anyone who sandbags just plain sucks. They have to manipulate their power numbers for an easy win.

And even min/maxing Ronin + 4 healers, plus… my opponent much higher power, plus… 1 vs 5 is beatable 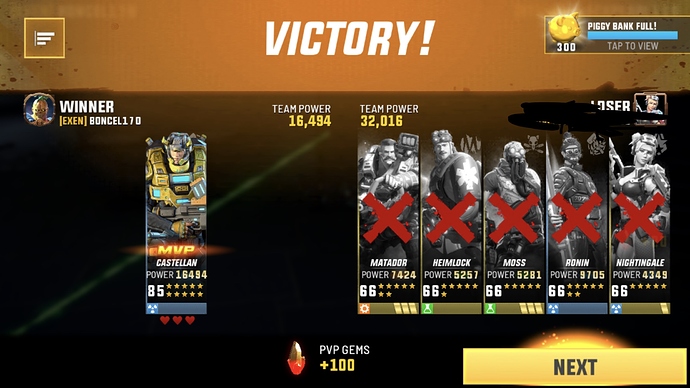 I want to see ronin change so that you lose something for every lower health hero you use. I think he should lose 20% shield from riposte and 30% returned damage for every hero with lower health. That way if he can kill my flatline in less than 5 seconds i can still kill him. If you up damage you make them a glass house. Case and point kunoichi taking 30% more damage from a skill. Of course if you use people with higher health you should gain something maybe ronin gains health. Make people decide how they will use him don’t reward people for maxing only ronin and then throwing him with gold heroes and effectively bullying people who are generally lower leveled and power.

One year ago Ronin was useless. Now he is op. Next year he might be useless again. Life goes on.

The current Ronin’s reflex skill is so useless with current AI system. He is just randomly swing his sword like an idiot and watch his teammates dying without contribute any damage to the team. Of course, he will be targeted to die last. It should be better if the AI triggers his 2nd reflex skill if he is targeted(be hit more than 2 bullets or losing 10% health).

The reason he was useless was the ridiculous imbalance that were the mech DPS heroes. Ronin could have been twice as strong as he is now and it wouldn’t have mattered when Panzer erases him 5 seconds into the match.

I thought it was because everyone just jumped to meta teams and no one tested out ronin or his plat.

and no one tested out ronin

Hero Hunters has over 5 million downloads on the Play Store alone. How likely do you really think it is that nobody ever tried a common 3* hero. Before Panzer, Dogface dominated PvP. Matches took 30 seconds at most before the HP role warfare. No energy heroes had a chance, not to mention that once Panzer engulfed the meta, there was exactly 0% to win a match if you were dependent on an energy hero win condition.

I wasnt very descriptive when i said everyone jumped to meta teams. You have a good point, but of course i dont mean no one tested him, just not a noticeable amount of people. His silver skill was useless before the buff, and the mech dps meta of old times was just more reason to discourage people to use him.

Honestly i forgot the point im trying to push, but i think its that ronins platinum was always the same since then, so it COULD have been used, but the meta forces newer players to follow them to profit. But then i forgot how op panzer was back then.

Wasn’t he supposed already nerfed? He keeps killing all heroes just with 1.5-2 clips.

Agreed, Wesson’s Plat boost is not even as much but still a lot more restrictive in who it applies to. Ronin’s should be similar. Either a more specialised bigger boost or a general but very minor boost. And the fact that it boosts BOTH his allies HP and his own Attack substantially is obviously unbalanced.

I agree on not nerfing Ronin but modify his Plat skill. Instead of Honobound working off “all allies”, why not just apply to People Guard heroes only. This would be somewhat similar to Wesson’s Plat that applies to UAF and UAF Airborne