Now that HH has decided to cap the total number of fragments’ reward in coop mode, in case the developers don’t want to hear negative feedbacks, here’s an Idea about distribution of total frags which may help to blow a new spirit in. Although this method may partially deviate the mode from topic, it can still help some people to get their hands on featured heros before first bounty event.

Here it goes like this:
Lets assume as per new limitation, there is 16 frag available in a coop trade 85+ (8 for each participant).
The idea is instead of awarding equal frags (8) to each per round, let the teams fight over the total number (16). I pictured myself a mirror shaped battlefield which starts from furthest points for each team apart and ends (but not limited) to a common main ground where the final boss/bosses await.
Both teams should fight all the way to the main ground and fight all the low level and high level opponents in process to make it to main ground in order to face the final boss.
As I mentioned above the end point is not limited for any team, meaning that if a team performs better and could defeat the final boss earlier then can continue to the opposite team path and clear the remaining opponents of under performed party.
The battle is over only when all the opponents in the battlefield is cleared including one of the teams. Yes you read right. as soon as the opposite teams face each other they can decide either clear opponents or shoot each other first. At the end only one team should remain and all the rewards should be distributed according the percentage of total damage dealt. For instance if a team has made %63 of total damge would take 10 out of 16 frag and the other team with %37 of total damage receives 6 frags.
I hope below awkward

image would help to show what’s in my mind. 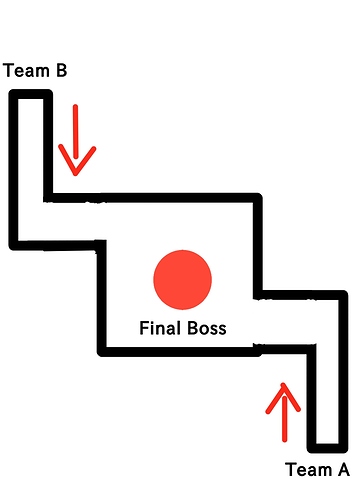 I don’t know if this idea has been already published by anyone in any thread, but I just felt some serious changes is severely needed in this regard, so I posted my opinion.
Its just a raw though, kindly help to cook it.

Sounds great as long as it is a separate version of co ops along with the original. From what i understand, its kinda like tug of war and you get prizes based on how long your side of the rope is, although a high level player carrying a low level might make it unfair. In terms of reward and escalation, each competitive co op should reward 1.5X the original, so it should be relatively equal.

Thank you for taking your time.

Sounds great as long as it is a separate version of co ops along with the original.

Well it doesn’t seem the HH intends to grant any surplus frags otherwise They wouldn’t cap the number.

although a high level player carrying a low level might make it unfair.

It’s one of major issues of the game which has been the topic of many threads since the begining. “Miss Mach making” so in general the issue has been long at stake.

What I proposed is kindda mixture of:
Coop (two teams with a common purpose)
PVP (eliminating each other)
Bounty (Damage count)
So what you called tug of war is relatively correct.
Actually this way of Coop gives the chance to more competent players to receive more. And in case the match making works well, it serves the purpose well.

@ all saints your idea is a good one and would benefit those not willing to pay there is another way I think would work they should change it so players can only trade in thier Alliance so it wd stop those that trade outside then the ppl that buy new hero wd decide who to trade with daily and 1 reset should be allowed.

I should of also put no limit set for hero frags

Thanks buddy.
A thoughtful suggestion. But I personally dont think HH team would remove the limitation any time soon.

I wish one of the gentle devs drop comments so I know atleast they were aware of this thread existence.
Thanks for your kind attention.

@BOOMSAUCEMAN If a thread is really old, please let it sit rather than ‘resurrecting’ it from the dead.