So would i unjamon… Kind of my point. Don’t limit the frags and lower drop rate, just make us pay for it like w bucket.

Another example of this. Hero skill points are now a flat 20 gold. I would have to buy 3 purchases to get a better value. 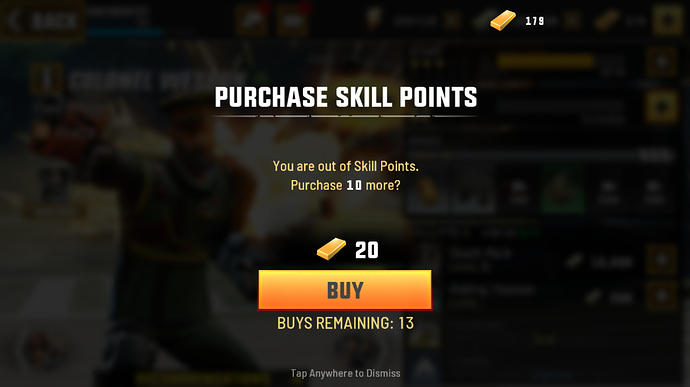 Just realized that and fixed it, along with the assessment @DESTROYER1DAN

Just updated the game. Was excited for about 5 seconds. Then… A fixed amount of 60 gold each time I need a stamina refill is an improvement? This is BS. You sold this change like it was going to benefit us. This benefits YOU. This is an extremely inconsiderate move on your part. We’ve made you rich. Are we just dollar signs to you?

I never bought skill points (other than by accident) so it doesn’t affect me.

It sure looks like we will need alot more gold to play this game to win/be competitive. From where I am standing and looking at things on the above analysis, it looks like this game is purely pay to win from here on in relation towards the 2 major game modes.

To be clear, I am NOT saying that it is impossible for freemium or low spending players to play or enjoy this game. There is a difference between Pay to Win, and Pay to Play.

For me, it looks like this game is going the direction of Pay to Win.

For PVP, I believe that low spending / freemium players will have ZERO chance of making it into top 50 PVP without spending gold. You can be an exceptional pvp player, but there is no way you are clocking 30 million pvp points (or 100 wins on 3 hearts) in 1 cycle without revives and without the bonus hero.

As for bounty, since it is a team game there is a possibility that a low-spending/freemium player can be in a great alliance, but with recharges becoming more common it is very likely that low-scorers without the benefit of recharges are gonna be pushed out by those who want to get into the top alliances and who are willing to pay for that to push their bounty scores up. There will be exceptions and definitely, for an alliance to retain top rankings within top 5 or top 10, a number of their major bounty hunters (not just 1 or 2) will have to be on recharges, carrying the rest. There will be no such thing as free to win for bounty. If you’re a low-spending/freemium player in a great bounty alliance, consider yourself very lucky and make sure you hold on to your place!

I understand the commercial need for HHG to bring in money and get players to spend money on the game. I personally have supported the game more than the average player (VIP 14). This post is NOT about that. (Please spare me your robotic answers about that if you wanna reply along those lines, you’re preaching to the choir).

What this post IS about, is the transition into the Pay to Win model. I believe that for every successful game, regard must be given to make it possible for low spending/freemium players to succeed at the very top of the playing field, provided they put in the effort and the grind and all that. However, I am not convinced that the recent changes take this sufficiently into account.

I don’t remember Jareks’s launch but did he come with _ million bucks, gear and 100 skill points + more?

Very well put Sing, they’ really haven’t thought through the implications of this. I hope the alliance wars isn’t an excuse for these kinds of changes.

100 skill points and plat batteries, wow so much value, why did I not see this before

I thought it was a nice bundle. Get it or don’t get it. It’s already designed and released in this form and it won’t change.

For PVP, I believe that low spending / freemium players will have ZERO chance of making it into top 50 PVP without spending gold. You can be an exceptional pvp player, but there is no way you are clocking 30 million pvp points (or 100 wins on 3 hearts) in 1 cycle without revives and without the bonus hero.

I guess you are right, I don’t revive hero’s, but I always use bonused hero’s, I manage to be on top 100 but at the end of the tournament I was in top 500 with 35+ million points

No matter how much I put my time in PvP, no matter how many times I beat top 50 player’s, it’s impossible to be there without reviving your hero’s and spending gold.

But also a good way for them to make’em save their gold for something better.
Even the 40 gold refill isn’t good value.

Players who choose to buy a new Hero outright will be able to get mileage out of their purchases, while non-spenders can unlock the newest Hero over time.

I spend cash money in buying gold to unlock the newest HERO, by use of reseting allowing me to have an advantage over non-spenders!
For me this is “tricky” basically a push, to buy more gold to get HERO, via Special offer to have an advantage over non-suspenders!
There may not be a reson to buy gold at all due to the new limitations being, no resets, an unavailable opportunity for, mid-spenders like me (30 day gold drop) which apperes to reduce the slightest advantage of spending money in general.

If the character will be available via gold rather than cash may counter any advantages of reseting by saveing gold over the month to get the HERO.

Looking at this in both (Buy/Free), would this add up around the same amount, as long as you save gold over the month. With a possible larger advantage saving (30 Day gold drop) getting the character before the 1 st bounty?
I am unsure how this change will effect me as well as the other variables addressed, however this month will be bad due to using all my gold unlocking Bucket with the availability to reset, using more gold, which technically is buying the character and having the time to level them up before 2 nd bounty, before non spenders get the character for free. (The Average Advantage)

Being able to get the hero at the beginning or during first bounty is better all around??
I think it is good!

-Allowing the possibility to obtain the character for free resulting in less or more spending among the any spenders.

-Character availability before or during 1st bounty with limitations may reduce the Characters Bounties left during Bounty Event, with an annoying damage disadvantage!

Based on have 2 bounties considering the introduction of WAR.

Could this be a simmilar breakdown of advantages between spenders with adding the availability of the Character??
Which brings me to question this change: a punch for average spenders to spend more or stop spending in general?
I am sharing from my point of view based of predicting possable effects in relation with money, advantage and a possible update that presents a perception of change?

Thanks to Hero Hunters Monthy Update which results in sharing among same intrest individuals within this comunity!!
Thanks,
-J

I joined the forums just to post my opinion on this.

60 gold is too much for an initial stamina refill.

I’ve been playing for 182 days and never missed completing all daily quests. I watch all video ads for quick wins until unavailable daily. I do Tapjoy offers whenever I can. That’s ad revenue for them. And I’m VIP 5, so I do spend money even when using all resources to f2p. I think I’m a very dedicated gamer and by the time a year of playing has surpassed I will have upped my VIP level even more by buying offers I can’t resist. Overall, a long time daily player who has spent equivalent to a console game with dlc and still has interest to play and sometimes spend more money on new content I want.

I spend almost all gold earned on stamina refills. I know I should buy hero chests. My friends have told me from the start, to not spend gold that way. But I do. If I have that addictive personality and need to finish getting that gear item, I’ll do it and the gold price going up with multiple purchases makes sense. It’s inflation for my impatience. Maybe I just want to do it once and move on. But for an initial price of 60 gold? Naw. Never again. Would I go to the casino with $100 and bet 60 on roulette black? No. But I’ll bet $10. And then $10, and then $30. Get the point?

I’ll be saving all my gold for hero offers now. You know, the gold I saved by playing outside of the gold store. I wouldn’t buy Yellowjacket/Barrage or whatever his name is. But I would have spent $30 on Bucket if she was wearing more revealing clothes showing off the toxic gas burns.

The 8 frags limit and dis-encouraging community trading while requiring reset is by all means the worst mistake made so far. 10 frags a day at level 70 was just fine by me. These updates are only addressing issues that affect a small percentage of players and alienating dedicated others.

I like this. I like this a lot, I really do. Yes, I see why crazy active people are mad about some of the changes, but I personally like them. I don’t play this game 24/7. I have a life to live and work to accomplish. Evening the prices for stamina refills or skill points won’t be an issue for me at all. I’ll be able to get on, use what I had, be happy for the day and just let time refill it all for me. No money spent, no gold spent. This game is just entertainment for me; for others it seems like a cult following. They’re so concerned about every last little detail that might in the slightest hinder them from being better. This is really just a game after all. If it’s all really that bothersome, don’t play. It’s your choice.

What a ridiculously unhelpful comment… You begin with how much you like the changes and then go on to concede that they don’t affect you whatsoever. So what is it exactly that you like? You then dismiss the concerns of the those that are actually affected by the changes when you’ve already admitted that they make no difference to you anyway.

Meanwhile, you’re implying that others aren’t playing the game for enjoyment and that YOUR way of playing is the only valid one without stopping for a second to consider that others may be choosing to play differently than you. Instead, you put them down for not “enjoying” the game in the exact same way that you do.

You are certainly overreacting to my previous statement. You have taken an extremely pessimistic attitude and viewpoint to literally every single word I said. I did not put anyone down. I didn’t insult anyone. I stated my opinion. You chose to immediately put it down, call it useless and tear me apart for seemingly no reason whatsoever. I don’t know why you feel the need to be so negative.

if you do not play the game basically 100% your opinion does not count.

Once again, someone has made an absurd statement about what I said. Of course I play the game, otherwise I wouldn’t be here. I’d be a moron otherwise.