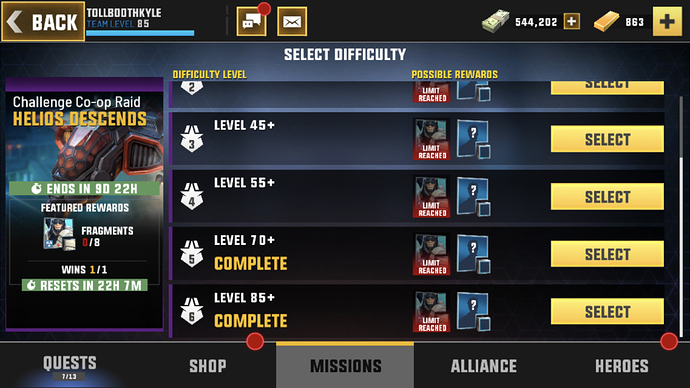 Came to check this. Mine didn’t reset either. Or it’s a bug, or the Devs lied when saying that we’d be able to grab the new hero for free even though it would take us more… Very upset with this.

Same thing happened to me today

Raised the price on everything and won’t let us get the new hero. I used to drop money on gold to reset to get the new hero. I guess what they are saying is that my money isn’t as important. Plus the frags, like other are saying, doesn’t reset the next day! Bunch of people in my alliance mentioning quitting. Can’t say I blame them

There Is a message at the top of VIP chat, and maybe global they are aware of the issue about the fragment cap not resetting and we will be getting a msg sent to our in game mail when its fixed.
I wander if we use a win and they fix it if we will get a free reset…

It was posted on Discord by Lord Nikon.

Do you have a link to for where to find this?
Thanks
-J

This amuses me. They screw you into buying the hero, then screw you when trying to get the hero free… I’m also quite upset about purchasing a $99.99 gold drop literally minutes before the new one with bonus materials and not being able to get refunded to spend the money on the better gold drop as well. That’s a different subject but it just shows they don’t even care about us paying customers. All in all either you spend a ton of money to get the new hero, or to add frags to the new hero, or you’re out of the rankings in bounty. There’s 0 possibilities of being kn top without spending a boat load of cash…

At least if you’re money grabbing… make your tactics work before doing it. If we gotta pay $50 for a new hero, make them relevant for anything besides 2 bounties. Make it so your system works. And make it worth our time when we DO spend so much here. This is insanity

This game is getting ready to “Jump the shark”
Not good

Dont get it. You mentioned how people were behind a paywall getting Bucket for the first Bounty, then followup by adding a daily limit and a reduced featured hero fragments payout per day which is split with a random hero? Wth?

I honestly don’t mind not having featured hero in first bounty. I have iterated it many times but I understand there has to be differences between P2W and F2P.

I just like having significant usable 5-6* new hero after faction event so I can start working on them with booster crates.

Please can you somehow put limit number of active bounties spawn for Yeager to like 3-5 in upcoming bounty. It is concern for me and would be for everyone if there are like 8 to 10 active Yeager bounties in first Watch bounty we can do nothing about. It will be nightmare.

I agree with you. Game can’t be created for top 200 alliances. They create a faction but don’t represent game.

I am F2P. I score about 1.5bil in first bounty without featured hero with grinding. I see no problem in not having new hero for first bounty at all. I am in a top 150 alliance.

I do have problems but having hero for first bounty isn’t one (if I have to state it - as F2P, I never brought reset to unlock hero before bounty. And I still did great).

I agree. I been listening to lot of players who have stopped spending on game because it feels less fruitful to them.

I also somewhat agree about exclusion of Artemis from crate. But I was alright with it since it has drop rate of 1.6 in hero crate and having her drop anywhere more than 20% would be detrimental.

I agree to their concept that some chatacters are okay to remain P2W. It is part of all games and although I don’t have Artemis and she is solid character, she shouldn’t be an easy unlock - 399 gold for 20% chance of unlocking is dumb luck. It won’t be fun but I would like a minute chance to grind her which is somewhat possible from Alliance Store or Heronium store (if I ever get a 10* at current rate stores changes)

I believe that anyone who worked hard to get a 10* should have option to grind those exclusive 7*. I think its fair because it usually breaks my heart when I see a noob player having Artemis out of shear luck lol.

Imagine Artemis in the crate, you brought all 5 but didn’t get her. But next guy unlocks her who been playing casually for just a month. Luck shouldn’t determine so much in a game.

I feel some characters should be P2W which can be compensable to grinding instead of luck. That’s what keep us F2P running

Good grief. They can’t keep the same heros in pvp and gauntlet stores forever. I understand that this will anger a few that started farming heronium. Hell, I lost my farmable too. But they have to change them eventually. And all this talk about not being able to use gold to open new characters?? How so? I got Yeager 1st day. Didnt spend a penny. Used gold from Tapjoy offers. Getting the new ones are pretty easy with a little work, strategy, and timing. Js

Tapjoy isn’t always a guarantee I’ve spent hours on offers and sent proof for them to tell me I never downloaded or completed an offer. It’s how I’ve gotten where I am f2p. But they’ve scr*wed me over a couple of times

If you read a future post of mine, I corrected myself. I did not have Bucket by the first bounty. Always was a little too assertive.

I’m glad that its settled. Please do stick to your original standpoint, as of now I agree with it more than my own previous viewpoint. Hopefully all respect is returned to where it was before.

It’s possible but takes a long ass while. I got both Prophet and Artemis through a combination of Alliance and Herionium store. Took me over 500 days for Prophet and around 550 for Artemis I think. (Keep in mind that Alliance and Heronium store didn’t exist until quite recently (for some one who just pasted 700 days yesterday))

Well I thought posting new Ideas about how to recieve frags would help. Therefore I left a new thread about how to fight over frags in coop back there in feed back section. The topic is Competitive Co-op. Plz check and help with Ur comments if U like. Many thanks.

It’s not all about getting the new hero. All focus is on that. And yes, you can do, relatively, good in bounty without one of the bonus heroes. But it’s so much more than getting new hero. I’m a 700+ player (that means I’ve played a lot) and I don’t have all heroes. And I’m not complaining about that. The main complaints is that we get less and less value for money spent. For new heroes monthly that only comes to play in two bounties, then stright back to the closet and never to be used again (until next time that fraction is bonus for bounty).

It’s about us wanting something to happen with both Gauntlet and Gorgon Wakes for a long time and nothing happens. We get Alliance War instead.

It’s about rewards for events. Sure, they might seem fine and needed for a new player, but not for the top players still striving to getting stronger. This frag event for example. None of the rewards gives me any value. None. Why don’t give some to all instead? Why don’t change the rewards for Gorgon as a quick fix? I’d say no one in my alliance plays more than one Gorgon and that’s for daily quests. Do I need to say it’s all on auto?

So, no, it’s not about getting the newest hero for free. It’s about so much more. But I guess you only see what you want to see.