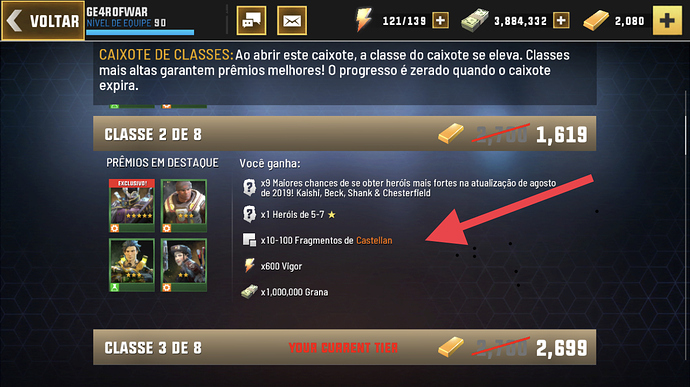 Contact support not on the forum. Not much they can do here

It is probably an advertising error, it probably means Chesterfield frags and not Castellan frags. The clue seems to be that the text is orange and the name of the crate is Chesterfield crate.

Nonetheless, this is pretty sloppy. The error (if it is indeed an error) is repeated throughout all the tiers where there is a description of the extra frag drop (2,3, 5, 6 and 7). If you bought it for the Castellan frags I think they should do right by you.

By the way, devs please look into it, Beck frags seem to be dropping 30 instead of 60 (maybe it is intentional because she is a native 2-star hero?).

I honestly don’t see a problem coming to the forums to report an issue, frequently in-game issues are experienced by a wide group of players who have the common problem. You may or may not hear from a dev but at least other players can share their experience (if similar) or tell you what to do to get help.

Well you did the right thing by reporting it here as it is a bug and you are warning other players about it, however like some other posters here I just presumed it said chester frags without reading it lol

The better question is did you actually get your chester frags?

You can post this here, sure. Let other players know you’re experiencing the same issue. That’s good for solidarity, but it doesn’t help solve the issue. There’s no way to investigate your account from here. So while it’s good for making noise, it doesn’t give us actionable data and account access.

I would contact support. If they don’t immediately solve your issue, there’s a reason for that. If all problems were easily solved, they wouldn’t have happened in the first place.

Then you wait for support to respond yes

so far nothing or automatic message

As it was a Chesterfield Crate, and players got Chesterfield frags, even though it was listed as Castellan, we won’t be substituting prizes. You got the correct frags we intended. For those who bought the Chesterfield Crate and were hoping to get Castellan frags, we apologize for the miscommunication.

I hope the intention is not also to give such surprises. The consumers shouldnt be the ones to bear the cost of inaccurate product information

The mislabel of the frags was an error. We don’t seek to intentionally mislead anyone. There’s nothing nefarious going on. Mistakes happen, and I apologize again for the inconvenience.