Try truly focusing down his turrets one at a time. The only way to kill Castellan effectively is to kill his turrets first. The constant shields are coming from his turrets.

Some heroes are dangerous when you ignore them, and others are more dangerous (but more vulnerable), right out of the gate. Castellan is vulnerable without his turrets, and he will go down without them. Butter and Keel do go down if you focus on them, and Min is not without her weaknesses.

Overall, these are good heroes, yes, but you really can take them down if you know who to target first.

Thanks for the team

If you cannot beat Castellan and encounter him so much then you should include him in your team .
With Min-Maxing and in 3 Vs 3 battles I have faced issue while killing Castellan . However in normal 5 Vs 5 PVP , it’s not very difficult to kill Castellan . With a good dps hero like Panzer or Kunoichi because of her stun , you can take down opposition Castellan. Most of the times he is not piloted , so after placing one turret , he will try placing another one which will reset the missiles and give you more time to kill him. Taking down his turrets will make him useless . In PVP it all depends upon order in which you take down the opponent’s hero . Heroes like Mandrake Bucket , Keel and some more if ignored in the beginning will cause you trouble while others like Dogface , Castellan and some others will become a pain later on in the match , the game gives us enough time to kill these heroes by then.

None of them are OP. They don’t need nerves. They got nerved already. Several times.

1st - There are already too many castellan users, dont want to be with them. No offense.
2nd - Tried your strategy today. Met castellan 2/7, both times ended in draws

What is your in game name ? I could have a look at your heroes and suggest you a counter …
Hideo works as well .
Also you have to pilot those heroes , unless the opponent is hiding his Castellan with a couple of Frontline Hero like Bucket / Butter / Kobold / Matador , you should be able to get to the Castellan .A draw match means you didn’t have enough dps hero in squad or the opponent was very high on healing. Such match ups are rare …

This is the team i used 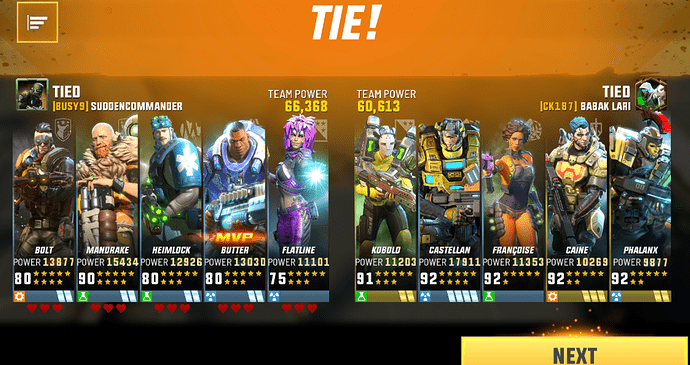 That’s a hard opponent to beat with a Bolt-manned composition. Still, Bolt does well against Castellan due to his aoe frag arrow; you just need to keep nailing the headshots.

I generally try to go with 2 dps of different element type like Artemis / Phoenix , Panzer / Kunoichi or Heckler . There is always a risk running dps heroes but by switching between the heroes and a little protection to them by Phalanx or Mandrake and a good healer in Keel / Duran , I am able to win majority of the matches . You met a very strong Castellan here and in terms of damage Heimlock , Butter and Mandrake all combined don’t do a good job even though they are good in other aspects like keeping the team alive .

U should try using Anvil or Yanlong, both are highly effective against shields, and Yanlong’s powerful mortar can decimate Castellan’s static turrets. Also the turrets are vulnerable to area attacks that would usually be dodged with a player, and forcing Castellan to put another turret delays his rocket turrets which is the biggest threat.

Good call. I’ll upgrade my yanlong since his faction is going to be featured next.

Agreed, Yanlong is one of those sleeper heroes. He’s very useful against energy static shielded heroes, and is surprisingly resilient late-game.

I disagree with parts , I never have any issues with min and I save her for last almost always. Dogface can almost always kill butter before his skills kick in. Cast needs his turrets taken out first or take him out early if no strong dps on the team

Treat phal like min and save for last, and leave my keel alone. If she on the opposing team take her out 1st or second depending on your team build and opposing team dps

Speaking of being sick of seeing the same thing.

So the OP encountered an issue and is frustrated. I don’t think walking away is the best solution here. In other (more serious) aspects of life, absolutely. But what you just said is essentially “stop caring and move on”. It’s bad logic, and probably the last thing someone in his position would want to hear. If he encounters an issue in bounty, would you tell him to quit that too? Or maybe Co-ops? AW? Gauntlet?

The best solution is to voice your frustration here on the forums in a civilized, level-headed manner, to discuss with others, and, of course, to be open to changing your mind.

Personally, I think Castellan and maybe Keel could use some nerfs. Sometimes Castellan’s shields from his turrets pop up three or four times in a row, and I don’t think the turrets go to full health every time. I might be missing something, though. Also, when both turrets are out, sometimes they’ll be in the exact same spot and I can’t focus on one. They will literally swap back and forth no matter where I aim. (Honestly, these sound more like bug fixes than nerfs lol.) But maybe Keel could use a small healing nerf, too.

Or, on the contrary…

Instead of nerfing more heroes, why don’t we asked to buffed the other heroes?

Have you thought about using someone that can silence the abilities you’re having trouble with? Like I’ll use maven against castellan. Her ground fire forces him out of the shield and if his turrets are in there, she heals herself at the same time. When he steps out I throw her grenade and silence his abilities. If he runs back into the shield to dodge, hes back in the fire.

Some of this might be attack order too. If you went after castellan first in that above match up, Caine’s going to shield him before you get past phalanx shields and before you know it kobold is throwing up her shields, francoise is going to heal and boost her stats. Once francoise boosts her skills she does serious damage, she can boost somone else too and now castellan is pummeling you with his turrets. You have a lot of support which is probably how you ended up tying.

I would have targeted Caine first and then kobold and then francoise. (Might switch those last two depending on who’s health is low at that point) casteallan likely has turrets up so I start focusing on those. Then him and phalanx last. You might consider swapping out one of your supports with someone that can due some medium damage and light healing. Beck might be good or halo. I like a halo/flat combo because when flat uses her taser halos lighting doubles the damage. Since that taser also make the target stationary you can rack up headshots with bolt.

thanks for the tip. I’ll give it a shot

U could try ghoup or purifier for longer fire. Purifier is awesome imo