Hello everyone!
I love this game and I wish it would thrive even more and grow more in popularity. I am a firm believer, that if this game is exposed to its core audience, it could easily become one of the most popular titles on the app store and stay there as long as the developers keep up the amazing job they are currently doing pushing out new content and keeping in touch with the community.

However ever since I started playing the game, I have had one huge issue with it, which i do believe pushes away countless new players every single day, preventing the game to reach its full potential: this game is extremely expensive and you only very rarely feel like you get enough for the price you paid. You might think: “hey, isn’t that the fundamental purpose of an RNG based loot crate business model in the first place?” and you would be correct, but please let me explain my statement regarding this specific game. I am aware that HotHead studios is in Vancouver, one of the most expensive areas on the planet and developing a game of this caliber costs a tremendous amount of money. While the prices in the game might be affordable in areas like Vancouver and other rich regions of developed countries, it is outrageously expensive in any other place.

You also have to consider how extremely tired every mobile game enthusiast is from the endless flood of low-effort games with the sole purpose of milking as much money as possible out of the customer. If this game did a better job at introducing new players to all the ways of earning heroes and provided more actual benefits to VIP players, it would have a lot more pull and appeal, and would make many more curious new players stay. A new player only sees that his 5 bucks wouldn’t even be enough to buy him a single hero crate and he is standing there out of energy with his default heroes, 0 bucks, the inability to continue playing any game mode, and an ever growing idea to file this game under pay2win, like the thousand games he tried before this one, and just go ahead and uninstall the game and move onto the next one. He will never discover all the unique heroes, all great campaign missions, coop raids, all the competition in pvp and the cool alliance events, with all the generous rewards they offer. He wont realise that 25 out 50 heroes are actually unlockable by playing the game, he will just see that they are locked and his 5 bucks wont even unlock a single hero crate.

As a paying customer who is enjoying the game to its fullest extent, but living in a country where this game is borderline unaffordable, I would like to make suggestions on how to appeal to a broader audience -especially in countries, where the average salary is lot lower- with a slight shift in the business model and monetization.

Make VIP provide a completely advertisement-free experience
This is a feature, that i believe I am entitled to as a paying customer. Ads should be the means to provide content to free users, not for already paying ones to sit through. VIP benefits in its current state severely lack any kind of real content before VIP 10, where you get a second Gauntlet reset. Adding the complete removal of ads to the list would satisfy many players who are fed up with having to sit through boring trailers of garbage mobile games that they will never play. To make it a pleasant yet satisfying experience, I would not remove the 2 ad related quests or the free wins, but simply change their icons and by clicking on them, the player would be instantly redirected to the rewards. Here is how I envisioned it: 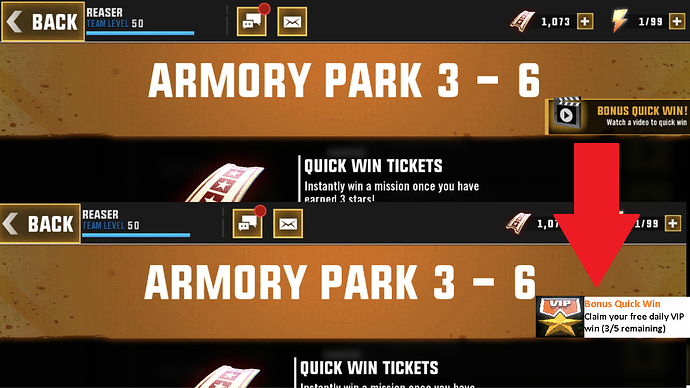 This would add a sense of premium service to the VIP experience, which in its current state feels just like a means to spend more money (except the VIP 10 Second gauntlet Reset) 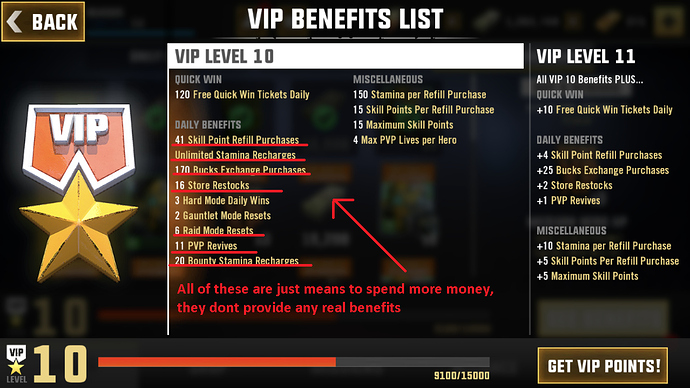 I would like to see a change in what the black market has to offer!

I would make the black market a place where fragments for heroes you already own would pop up and you could buy these with gold to upgrade the heroes, which can only be found in crates. I would also radically change the amount of frags you would get for the prices currently in the store or would decrease the price. 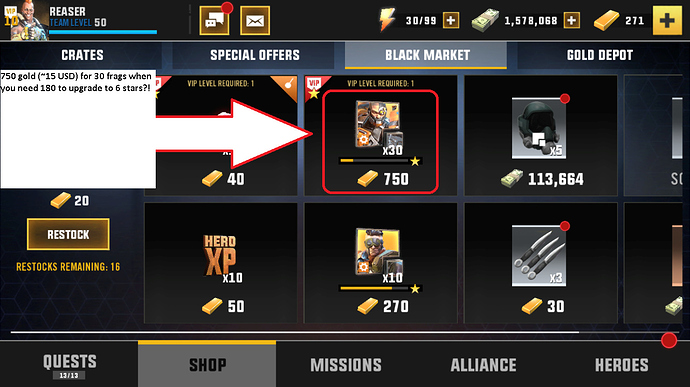 Last, I would like to suggest changes to the gold prices
As I mentioned earlier, gold is way too expensive and does not feel like you get enough for what you pay for. By changing the amount of gold you receive for the specific prices, you open up the game to people in countries where the currency is worth a lot less and there are a lot more additional taxes. Also, i am firm believer, that someone who is satisfied with what they get would be more willing to spend more on the game, than a customer who has to pay out of necessity to unlock what he desires. Paying for extra content is much more desirable, than paying just to progress past a specific paywall and a happy costumer stays around a lot longer, than one, who feels like, is being forced to pay.

Here are my suggestions: 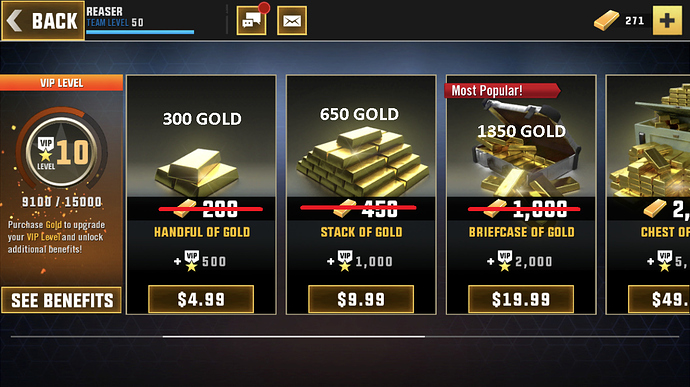 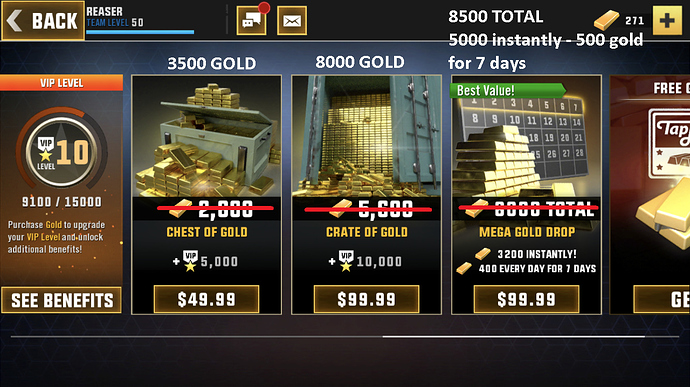 I love this game and I wish it would gain the popularity it deserves. I honestly feel these changes would draw in a lot more players, who would stay and become part of the community. I also believe these changes would by no means decrease player spendings, on the contrary, it would incentivize players to spend more because of how much more they would get for their hard earned money.

Thank you reading through my suggestions! I would like to ask if you agree or disagree, and if you have anything to add to the list. Thank you and have a nice day!

I absolutely agree with you about all of this,!

Well said @REASER I could not agree more. I am a new player and have fallen into an immediate love-hate relationship with the game. While I love the content I am turned off by the exact perception of Pay2Win you just described.

When I got VIP, at the behest of my friend who introduced me to the game and has spent much more than I have…I regretted it. I felt trapped behind a never ending tier of VIP levels that…that what? Give me the option to spend more money?! The price to benefit ratio was immediately depressing.

Yet I play on for the same reason you do. I truly think this game could become “the next big thing.” The League of Legends or Overwatch of the Mobile Game World. I believe in that, I want to be a part of that, and I think the changes you’re calling for are the first steps needed in getting there.

Agreed to the fullest extent @REASER
Your suggestion is spot on.

This signifies quite a bit of greed from the Devs, which I hope they correct rather soon. I feel like a Gold crate (something that may potentially yield something so utterly worthless) is not something that should be worth 100 gold ($2.50) NOR have a waiting period of 48 hours to receive freely.

But yes, overall, the gold prices are very flawed, especially the black market, and VIP rewards only allow you to spend more gold… nothing very beneficial about that, despite the title of “VIP Benefits”

@djpatje, we read every single post. Please don’t feel like we are ignoring you. It’s difficult for us to comment on this kind of feedback, as there are many layers of approval this must go through. We are discussing this feedback but are not at a point in our internal discussion where we feel confident enough with a discussion to share an update.