Brawls tournament Panzer what a joke

If you don’t have Gold or platinum panzer no way to win approaching third hero revive and can’t break 100,000
every match I’ve loaded in gold or platinum Panzier across from me
only selectable Heroes are majority energy is this coincidence or do developers want us to Spend gold to revive characters in a tournament that is broken
Trying to hold out hope hear that your fix PVP but with all the silence from the developers about potentially addressing the situation leads me to believe that they put Panzer in the HH ecosystem to frustrate some players to benefit other players but for most and all reasons to make you spend money to upgrade your panzer to platinum 10 star level and join all the other glitching cheaters Who are abusing on unaddressed situation
furthermore All players should receive something for participating in any PVP tournaments for the last month because of Panzer
Example the PVP brawls tournament going on now within five hours the top alliance already had 53,000,000+ point same to be said for each alliance underneath them and I check in the top 10 players on these alliances all had Panzer eight stars plus platinum
Those who participated in the tournaments never really had a fair chance to rank

I am just wondering how many posts it takes for them to actually DO SOMETHING NOW. It will be fixed in next update for sure, which is like 2 weeks from now???

They are almost certainly going to hit her with the nerf bat in the next update. It’s gotta suck for players without a high level Panzer. I won’t lie, mine is pretty tough (9* 1-bar Platinum) and if I run into a team that doesn’t have her it’s an insta-win.

Squaring off against a team with a similar strength Panzer isn’t really much fun either. In that case, the game is almost always decided by whichever player loads in faster. In every match, one player’s Panzer gets to the “ready” position a little faster than the other. That player fires breach knocking off a good chunk of health and staggering the other Panzer. Then it’s a few quick shotty blasts to break cover and stagger again while cleaning up the rest of her health. There’s no skill involved at all, it’s solely determined by who can fire first.

only selectable Heroes are majority energy

While I agree that this tournament is just a place to see who has the strongest Panzer, most heroes being energy doesn’t matter, since element bonuses are disabled for 3 men brawls.

Ive seen a few 10* plat Panzer with other 2 weak heroes, and I knew I was going to lose instantly, or, in the best case, lose two of my three heroes lives.

I still don’t know why they have to wait a whole month to fix a hero that is completely broken. Same happened last month with Oracle being bugged. She was a free ticket for top leaderboards.

Maybe they need to put a new mode for people that want to play these kind of one vs one games
A.k.a. Panzer versus Panzer
The only way I’ve been able to interrupt her start of the match shot is for you to use panzer and hope get your shot first disrupting her skillfrom going off Like when Gammon spinning his finger for his heel ability
you can easily disrupt that when you see him going to motion
In all honesty they need to remove panzer Instants kill the beginning of the match and I think she’ll be fine with A few small tweaks

Weird that everybody keeps saying $10 special but on mine it says $29.99 For $10 all I get are five of each fraction fragments money and skill points
Maybe this has something to do where certain players get patrols for 10 alliance store gems
Where if I take the same patrol And I get 63 gems this happens all the time I don’t think people are paying attention

Not every player gets the same deal, FYI 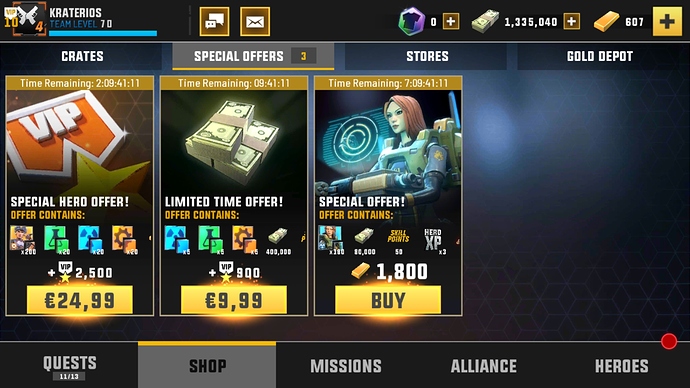 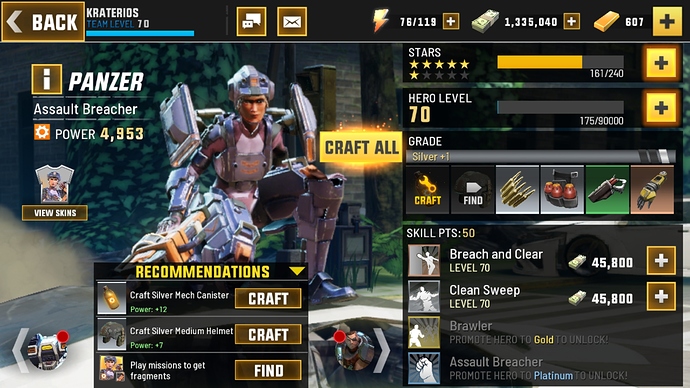 Yes, I really hate it that every match between Panzers is literally who gets to cover first and breach your innards.
And every match where only one side has Panzer is an autowin for the Panzer.

You keep talking about understanding matchmaking. I ignored it the first time, but mate, if you are abusing matchmaking somehow, that doesn’t magically solve the problem for all the honest players out there that are not min/maxing, or PvPing with unbalanced team or whatever other exploit you found.

But don’t come here to brag about how you can exploit a broken system and tell others there is no problem and they should find ways to exploit the system too.

Exploiting matchmaking may prevent you from having problems with Panzer, min/maxer and most of these, but that doesn’t mean we are supposed to be exploiting a mechanic to get fair matches.

Don´t feed the troll. Just let him spread his bullshit and be happy with it.

Bragging about misusing the system, not having to face panzer and only ending up top 500, this post is complete toxic

Next update is almost certainly this week.

be a man, get a panza lol