Who are the top tier heroes for campaign levels? I am trying to get as many levels done as possible before the easter hunt ends. I’m currently using Phalanx, Heimlock, Cinder, Salvatore, and Flatline. Is this a good team conposition, or should I be working on upgrade other heroes?

I would Suggest working on Clyde he is a very good damage dealer with those 2 ability’s bronze and silver plus gold so try him instead of Salvatore.

It is good. IMO, there is no definitive formula for the best hero to use in the campaign. Just use the heroes you like, and upgrade them frequently so they’ll be up to scratch. And most of all, just have fun

Wesson’s silver should be good help for District 13-9, or any fight with a lot of enemies on the map (Into the Dojo, for example).

Has anyone here passed 13_10 in normal mode? If so what are your suggestions in terms of composition and killing order? Thanks.

I used dog, mauler, halo, matador and maven !
Contrôled dog and focused Kutrz (16x2) and next with mauler !

I have a 8* plat Clyde and I have dropped him from Campaign. He might do dps but it’s not as good as before and he dies to quickly. He really is not ideal for campaign.

Hivemind is really good for missions. Add halo and you have a constant stream of damage. Melts support fast. Since Ronin’s plat works off of Hivemind’s drones, he’s a good choose as well. Can really dish out some damage. Add Hardscope for his damage ability and his drone to increase Ronin’s plat. Flatline is almost a must. Especially when you get into the higher levels. Mandrake is also a life saver. Dogface for huge DPS. Matador for support. He’s always throwing shields in missions.

To name a few lol.

I use Dogface, Panzer, Nightingale, Mandrake, and Heimlock. I have had no issues beating all the hard missions and the simulator events.

Dogface is amazing burst/single target DPS when his abilities pop. This makes downing the named targets on missions especially easy. Panzer has decent DPS and good AoE to kill lots of adds or soften them up. Mandrake makes heroes go invis so if they are close to dying it will take heat off them and allow them to live. Night is just all around great healing and marking helps kill the named enemy heroes quicker. Heimlock gives everyone extra hp, reduces dmg they take, and does decent healing himself to help keep everyone alive.

you are right
but he is OP for PVP!

With right team he is. But as glass canon, I prefer Kuno over Clyde.

Sorry for hijacking the thread, but on a relatable note - which team do you think would be the best out of what I already have for campaign? Kinda contemplating who to focus on next. Preferably farmable heroes, thanks 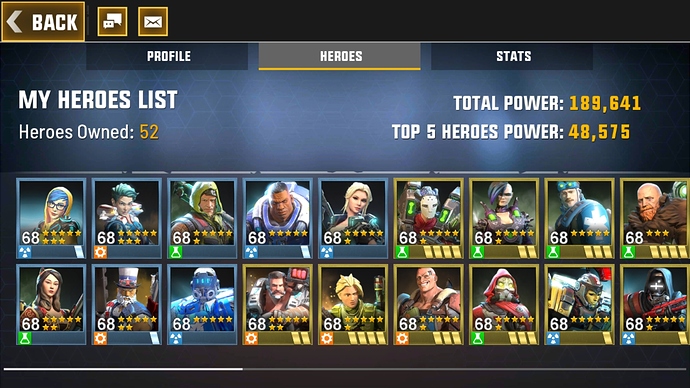 that depends on you. However, there are some heroes who have good synergy with one another:
Cinder and Keel: Cinder can mow cover easily, while Keel heals allies if cover is destroyed. Do the math
Halo and Savage : A bronze of a Gold Savage with a Plat Halo will result in a lot damage
Kuno +Bucket or Briar : Honorless boosts Kuno’s damage if she hits a rooted or lifted enemy. Briar and Bucket’s lift and root respectively, hit ALL enemies.
These are just some samples. You might find more as you play. Just experiment and have fun!