Anyone with Platinum Artemis? How does she fare in PVP?

Is Plat Artemis worth it?

I am thinking of experimenting with a Bio “DPS” on my team to counter the common Dogface and Panzar DPS Core.

I know Odachi is a good candidate for Bio “DPS” but my Odachi is only at 6 Stars while Artemis is already at 10 Stars which will be ideal for my PVP Team (mostly 9 Stars atm).

I kinda like Artemis’s concept and am lucky to uncrate her 5 times to get her to 10 Stars but she is kinda squishy. Was hoping that Platting her will give her a damage and health boost so that she can stay alive longer to compete with dog/ panzar

She can’t compete with Panzer or Dogface in any way. I don’t have her but played against her from time to time. Her damage output is nice but slow and inaccurate if played by the AI. So you have to control her yourself. Even then you can avoid her damage easily by just changing cover from time to time. To do good damage your opponent has to completely ignore her. If he is aware of her she isn’t really helpful.

And yes, you are right, you kinda have to control her even though it isnt that easy

Artemis and prophet are the two heroes with so much raw power. I feel that one of the best things to do is to keep them low tier (preferably green), and PvP off of low level people. This allows you to take advantage of the raw power from their primary weapons. Artemis actually has decent abilities so this works better for prophet, but you can still take advantage if she’s low.

Oh well, both my Artemis and Prophet are already Gold… Can they at least compete at higher grades?

They can with good team composition. It’s not hard for them to do, its just that taking advantage of their raw power is super effective.

They can perform on higher grades too, but i would put them into tier B, while Dogface and Pazer are A+.

Her biggest problem of her and Prophets too, is that they hit like a brick, but with there slow reload there DPS is going down fast if you miss a shot or two. A short example:

So what do do with her. A good solution would be to lower the damage per shot, but shorten the reload time. In addition a passiv skill which allows to pierce through the cover would make it easier to hit and therefore to deal more damage.
Her Platinum solves the HP problem a bit, but 70k on 10* Platinum is not that much either. Clyde has about the same HP and is a glass canon. Low HP, but he has a fast and high damae output. But Artemis has no fast damage output, she needs some time to get useful, because her damage gets dangerous only after the first wave of heal is over and some heroes are already weakened and you take them out with two or three slow but big hits. The only problem is, that she is often taken out before, because of her low HP.

Wow thanks for the detailed explanation… really sucks that she is not just a character with unreliable damage but also a glass cannon. She had so much potential…

I guess unless they fix her, there is nothing much for her in PVP then… will probably just use her for campaign or PVE

Thanks again. Much appreciated

I have seen some terrifying Artemis team comps at plat (needless to say I loss), but you generally have to have the entire time revolve around Artemis. Things like lots of single support, and squishy support like heim are needed in order to make it work. Or you could take the blitz strat where you go with a ton of DPS and hope to beat out a team designed to extend the match and win in later rounds before they become powerful. 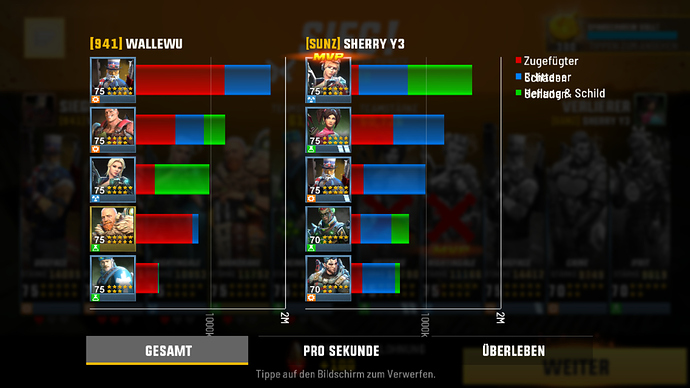 Just had a match against her. Her damage looks okay in comparison to his other heroes, but she was the only of his heroes to be alive all the time, I killed her the very last and still she was only on a tied third place of overall damage.

Her plat skill just is balls. Keep gold. Skill up and star up and set her to gold 4 that’s the best you’ll get out of her.

what if you put them together with heimlock and phalanx?so she’s not getting picked so early?
i like this kind of discussion

Sadly she has no hp and that builds just an overall poor team. Gold and don’t touch her any further until she gets a buff

i like heimlock + phalanx comp tho (bonus hp and shield at the beginning), but i’ll take your advice

Sadly yeah she is very far away from meta

She is okay when AI controlled and you have a decent cover breaker like Baron.

Other than that she is pretty rubbish.

The most dangerous thing I faced in the last Brawl was a 9* Artemis. Match was over in about 30 seconds, in an environment where healer+shielder standoff/grinddowns were the rule. Dunno about her plat skill, but stars definitely work for her.

A 3vs3 brawl with limited heroes isn’t comparable to normal pvp. Matador performed well too and is nobody I would go for in a normal pvp team.

True story about Matador. I probably missed out on some wins because I was slow to give someone with his track record a try.