I think there should be a yes or no button when an ally is auto-selected… in other words, whether we wanna proceed with that ally or not.

The reason i say this is because in the co-op pvp, i sometimes get paired with allies with gold or silver heroes while mine are platinum 4 bar and the system punishes me by pairing with opponents who are double in power with ruby heroes because the difference in power between my ally and I is alot.

Its not fair to punish me because the system pairs with lower power allies.

in other words, whether we wanna proceed with that ally or not.

If you chose not to play with an ally, then wouldn’t that defeat the purpose of it being Co-op PvP?

what i mean is for example if i click “no”, the system will assign me a new ally…

So it would still be co-op but just with an ally that will not cause the system to punish me because its a 100% loss with teams that are double your total team power.

Sometimes you do get a second after an ally has been assigned and before the opponent is assigned so you can click on back and cancel the match. But most of the time, both ally and opponent get assigned at the same time, so you cant click back even if you wanted to

You are searching for a random opponent at that point, if you wish to not play with a random you should add and invite some friends or ask someone in vip. Simplest solution

Maybe he wants to play with randoms, that’s the whole point of auto matching. The issue here is the player is getting penalized for playing the mode exactly as intended but can’t do anything about it

im fine with playing with random people… the issue i have is that the system is not auto-matching correctly… for example i have both 9* 3 plat bar heroes and i get auto-matched with an ally who has two lvl 11 silver heroes, then i get matched with an opponent who has all ruby heroes… and that is a guaranteed loss.

This is kinda like putting a band-aid on a broken dam. It’d be better in the long run to just improve auto matching.

RANDOM people, can be low or high, that’s the system lol

I definitely agree. I went and auto matched like 15 or so games yesterday. I have high plat lvl heros.

I got paired with bronze and silvers everytime and went up against a team with all plat, and ruby EVERYTIME.

So I understand the frustration. I kept losing lives for my heros and I wasted time on getting pvp gems.

Hopefully it’ll be patched up to a more level ally/ opponent.

I do like this idea. Theres one thing you guys might not be factoring in. The availability of the players to generate. When you use the auto feature it can only choose from players also using this feature. Its not like pvp when they can give you a bot. They have to pair you with a player and no one wants to wait forever. So they give you the next best thing.
I do see this idea making things better. With that being said you will be pressing “NO” a lot of times and that in itself will get frustrating. So as it stands. Pairing up with the right people will always be the best way to go. 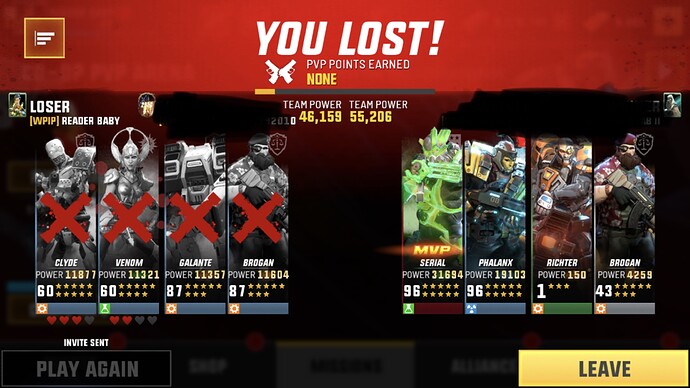 Why are we getting punishment here