For the first time, I was invited to an alliance war “truce.” 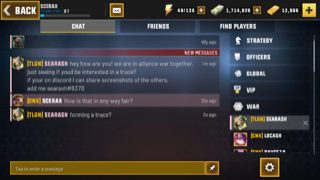 I have one request for developers. Please make sure you try and fix teaming up in alliance wars. Is not enjoyable when 3 alliances team up against you. And we only hold our base but somehow we made it possible to be first on our map. Without even having the center. Now half way of the war 3 alliances teaming up and specially when all those 3 are higher power then us and actually we are lower then then all the other 5 but still we are first. Now after teaming up probably we will lose. And I am n…

While it is obvious that it’s near impossible to find a way to prevent alliance team-ups, the sheer number of people defending the action itself is really pathetic. It’s an arena with six opponents. SIX. What the hell do you need allies for? To compensate for your inability to play an honest and competent game?

“Lmao what are you raging for. Chill it’s just a game.”

Sure. I agree. This isn’t important. It is a small game.
But before I receive such inane responses from those that do this bs, just think. The basic idea of what’s “right.” How would you feel if alliances banded together against you? It’s just a small mobile game, sure, but to suck the fun out of it for others- you’re still pathetic. It’s no different from hacking. It’s all incredibly unfair advantages derived not from game skill and strategy, but a giant load of bull.

Honestly, in the end, the whole alliance war concept was a terrible idea. Each party should be controlled by one player, making all the strategic decisions. So difficult to coordinate all the members to form one cohesive strategy.

And now, on top of that, this bull.

I’m not writing this to suggest a way to prevent this- I admit it’s primarily a rant. Hell maybe the devs even encourage team-ups, given the lack of fairness enforcement (which would be absolute bs). It’s a shame, really. I thought I could enjoy this new, refreshing game mode, but it looks like I and a whole bunch of like-minded people will have to deal with this.

“Just go with the flow.”

Truces are to hard to do

Since you were the top dog then team up with the other 2. Probably won’t help since they are weaker or split off the map in hard to coordinate places. Maybe a better strategy would be to preemptively team up before others do that? It’s hard to swallow but if you can’t beat em, join em. Same like the Ronin issue. If devs refuse to do anything then jsut gotta use it yourself.

And maybe if you hang on you will find that their 3 member team-up will fall apart once they overthrew yours and fight for topdog (unless they’re all fine with being 3rd place), which is when you can attempt a last-minute surprise comeback.

All is fair in love and war

The other post is mine and honestly is very unenjoyable as a game mode and is happening to us in every map. but I sure for some that their truces are working for a while is all love and fun but slowly slowly it will happen even to those then they will be bored of it. I am sure at some point they will post topics as this one. Is only the beginning and every week alliances are giving up on it. First and most important they have superiority of battle points. 25 players VS 50 or 75 players. Depends how many alliances team up. On my last topic was 3 alliances against us. But I hope and wish all the devs @Muninn @Huginn @LordNikon and all their team will try to do something about it.

You can reply on that topic, if you want, or provide a like. You don’t need to post a screenshot of a reply to another topic. Please observe proper forum etiquette.

Lol. When you don’t like the topic of course anything is expected. Instead of trying to get a solution for it. Or if you already are they reply that you’re working into it. But anyway. I didn’t see nothing wrong of it and I am sure someone else did that ages ago here and discord and it was mugging a member off for what he was asking in the forum. Nothing happened to the other one that was mugging but the mugged one got blocked for cupel of weeks. When you think about it.

We want allies because we want to win.

Why… wouldn’t… you want allied Alliances? Call it pathetic, call it cowardly, call it however you’d like. The truth is: an Alliance with even one ally is better than an Alliance getting eaten on all sides.

We’re still winning. In fact, we’re all still winning by the end of the war because there’s no penalty. Alliances don’t lost anything; they just get less than those near or at the top. Those Alliances who “lose” the war can simply spend a few more weeks earning up to the same amount of loot and fragments they would have gain as a reward if they were at the top of the boards.

My Alliance is far from top tier, placed 5th in the current war, and currently has no talk of allying. However, as the saying goes:

I can almost agree with your argument, but I feel like this argument is just like saying:

Hey guys, you should only do Bounties solo, don’t help each other out. If you need help, you’re pathetic.

If a bunch of Alliances teamed up against mine, well then I guess we’ll die.

If say, you had your way, how would you “fix” the Alliance War? You have given us a problem, now offer us a solution.

It is always easier to complain than to offer solutions. @Lurking_Garbage

@Lurking_Garbage the thing is that in every map we going in there is minimum 1 or 2 alliances that don’t even play at all. And I am sure that is to early for a game mode to be happening. All I am thinking that it will happen to everyone more and more often then you give up. But what does that mean. It will be a unpleasant game mode. That’s all. If this way is the best way to improve it then I am happy with it but in my personal opinion I think is not.

Good points. Nobody is really “losing,” and the end-of-season rewards do not differ by much. So admittedly, the stakes aren’t really high.

I actually overestimated the effectiveness of a team-up anyways. At least for this round. An enemy alliance would have to capture ALL zones of a sector by themself in order to secure it. So allied alliances cannot collaboratively attack the same sectors. Though there’s definitely a major advantage when it comes to resource allocation (defenses and attack points). And that is unfair without a doubt.

One gripe I have with your comment is that drawing a parallel with bounties made no sense. Bounties are a team effort for your alliance alone. You’re not helping other alliances or giving your own an unfair advantage (yeah yeah, fairness is subjective. I get it. You know what I mean though.) by “allying” with another.

Now, alliance war isn’t difficult to comprehend. Given time (and a rather short amount of time), everyone will eventually understand the optimal strategies. Essentially it will become a level playing field. But now insert bs “alliance politics.” While I agree that the urge to find any means to ensure success is natural, all I’m saying is that it’s simply immoral to tip that field (by allying with supposed enemies) when there’s only 6 total participants.

And yeah, I get it.
“Wtf is moral?”
“Everyone does it. Better to be me than someone else.”

But just imagine a game without that nonsense. Where the advantages to come only depended on individual alliances’ analysis, timing, positioning, strategies. That is my rant. The premise of my complaining. I never did mean to offer a solution to prevent this or to be overly persuasive, but perhaps I was preaching a “fair” game, even if I was rude about it.

As for why I personally would refuse an alliance proposition… It’s just bull to the other opponents. Simple. I don’t mean to sound like a haughty- “I’m better than you. I stand on a higher moral ground.”- kind of guy, but is it really nonsense to want a fair match without this ridiculous power imbalance that we cannot correct ourselves (given that everyone is equally competent)?

Lastly, I did have some idea of a solution, though I wouldn’t take it seriously myself. It’d be simple. Make war 1vs1 fights only. And with that shorter rounds, more resets, more attack points, multiple bases (starting points), and maybe duplicate heroes for defense (E.g. you can use each hero 3 times when defending.). I’m not a game designer, so I’m not sure if this would be as fun or interesting, but it definitely would be without “alliance politics.”

Alliance War in Big League is Snakes War. For example – we work with one alliance during few seasons, help them and vice versa. But in current season this alliance first stop all co-op work and now betray us. Cowardly. First they offered partnersheep, then boxed our territory on start, then brainwashed us whole day and finally backstab when start second day. And all this for beat VRIJ in global score. Look like SGBR from 1st and 2nd seasons has a great legacy… Congratulations TCUB. But you may betray someone only once. Remember that. Never don’t trust them if see this alliance on the map.

Here’s a food for thought.

This is just a game. Every season, every war is different. Alliance that was once your enemy may in the future become a friend and vice versa.

If you don’t like Alliance Wars, go play PvP or bounties. There’s plenty of other mode to partake in.