I recently had some trouble playing while playing PvP on the airport map. It seems that you can´t hit every Hero from ervery position. 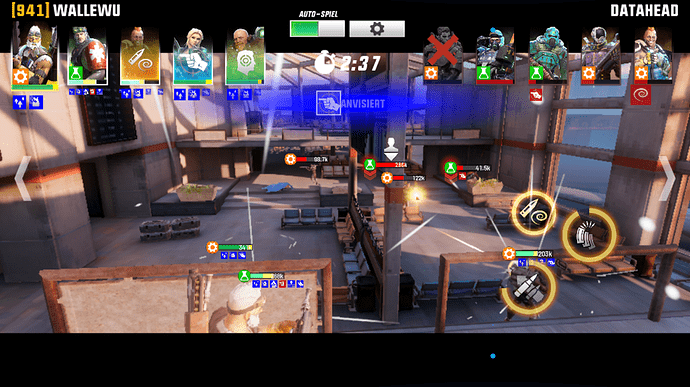 At this example I can´t hit his Razorback with my Dogface, because his always hitting the undestroyable post. I have to change cover first, before atttacking him again.
You already have enough disadvantages at this map if you are unlucky with Hero positioning and have to brake through the wall first to attack, so there shouldn´t be even more. Apart from this you should always be able to attack everyone from every position in PvP.

IMO the unbreakabke pillar at the centre is fine, given they are the main structure of the building. You just have to move your heroes around. Should your DF stays in one spot he will be a great target.

For me it’s about the issues of graphic glitch where like galante gets hit and he jumps back and glitch into a container etc.

I´m aware that I can move my hero, but that takes time and time can be vital. Moving to this cover takes a second, moving back takes a second again, making you lose at least two seconds, plus stand up an aiming.
Also the other four heroes you don´t control, won´t notice that they don´t hit the target and will attack that barrier. That is something that could cost you matches.

I don’t think every structure has to be able to be destructible. There are work arounds. Likewise for this map.

PvP should not be decided by luck. I lose more matches on this map then on all the others together. I am either unlucky to start at the wrong side, having to change position before the first shot and if the opponent is at least a bit clever he will change to the other side again and you will have to move again or destroy the barrier or go for another hero, beeing less vital for his team. Or because my heroes shoot the post without noticing. If it gets bad both occure.
PvP should be decided by skill, so the luck factor should be as small as possible, but for me, that is not the case at this map.

This is not luck, it is random generation process. There are cases in the sewer map where my key dealer running to a different part of the map thereby causing a delay in my deployment.

Or do you prefer to have the devs putting all teams in an open field with no cover, that way would be better isn’t it ?

I would disagree in the removal of the pillar, should it be removed how is this map different from others ?

Additionally, there are other factors that dictates an outcome of a match. By merely saying that you are handicapped with the pillar is quite an unfair statement. You do realise that your opponent are similarly facing the same odds of having being obstructed by the pillar too.

Am sure the AI is smart enough not to shoot at the pillar as they would move from cover to cover.

Likewise as a player we move from cover to cover and switch heroes too.

PVP is decided by team composition and skill. Luck does not play a part here. We all are facing the same conditions. Generally, I have a decent win rate in this map. Which a large part is due to the 2 factors I just mentioned.

So glad to see this posted! The pillar itself is completely fine. You’re not meant to hit every position from every other position. The problem however is that AI doesn’t recognize that there’s a pillar there. I’ve seen Dogface on auto blast all 18 shots of his skill combo into the pillar trying to hit someone behind it, which is obviously a map design oversight. The AI should never be mindlessly blasting shots into a structure that can’t be destroyed.

Like Papa-Marsh statet the AI shoots the post and that is a problem. If the AI shoots a whole magazine into the post that is a big disadvantage and it is sheer luck or bad luck if they do it or not.
I am aware that everyone faces the same odds. I may have won some matches because of the pillar too. But i hate winning or loosing because of fate. I want to win because I played better then the other. or loose because I was worse.

The map would be still different with the wall in the middle you have to break. And it seems like it is a bit bigger then the others. Siply move the pillar a bit.

Don´t get me wrong. I still win most of the matches on this map and I do not want to blame the map desing for all my losses. But as I stated above, I want to win or loose a match in a fair fight and not because my teammates wildly shoot on a unbreakable pillar.

You can do this on all the other maps. That is why i made this post. Would be great if a Dev could clarify if this design is intentionally or if it slipped through at testing.

I like this map being different from the others. The fact that the map is divided in two parts is cool, in my opinion.

But yeah, AI wasting a whole magazine shooting a pillar without moving is bad design.

In my opinion this is intended to design like this. It is fair as your opponent is also in the same situation. It requires more technique and strategy in this map. Like you can move your character to the other side and use the post to block the attacker. Some destroyable wall is good design too as it need you to make a decision either move or break it.

The problem isn’t that it’s unfair. The problem is that AI doesn’t “see” the pillar and unloads entire magazines into nothingness. Sure, you can fix that with whichever hero you’re piloting, but 80% of your squad is still perfectly fine blasting their shots into impenetrable concrete. Not to mention anyone on auto-play.

It is annoying sometimes the AI is quite brilliant. It seems that they know you are targeting them and just move back and forth between the post. But I like this design actually.

I didn’t quite notice the AI problem as most of the time I only focus on the character you controlled. I agree if that is an “often” seen problem then they might need to fix it.

There’s another map though where you can’t hit everyone from a given position. On the Sewer map, there’s a pillar on the rearline covering a certain position. There’s at least one spot on the opposing side where the heroes cannot hit you because the pillar is large enough to completely cover you.

If it blocks Player 1 from shooting Player 2,
doesn’t it also block Player 2 from hitting Player 1?

Not really. Bots aim to the chest or the head, which may be hidden behind the concrete pillar. But a player can aim to the arms or feet. So you can shoot bots to death while they shoot at a wall. It’s kinda funny, but also bad AI.

Im okay with indestructible walls, and I like this map design being different to others, but AI should move if they can’t get a clear shot

Some destroyable wall is good design too as it need you to make a decision either move or break it.

Nothing against the destroyable wall, it can be annoying, too, but that is part of the map.

If it blocks Player 1 from shooting Player 2,
doesn’t it also block Player 2 from hitting Player 1?

I think it depends on the heroes involved. If, for example it is Dogface vs Galante, Dogface should be able to hit that big ugly cube. But as Dogface is much smaller, it should be hard to hit Dogface.